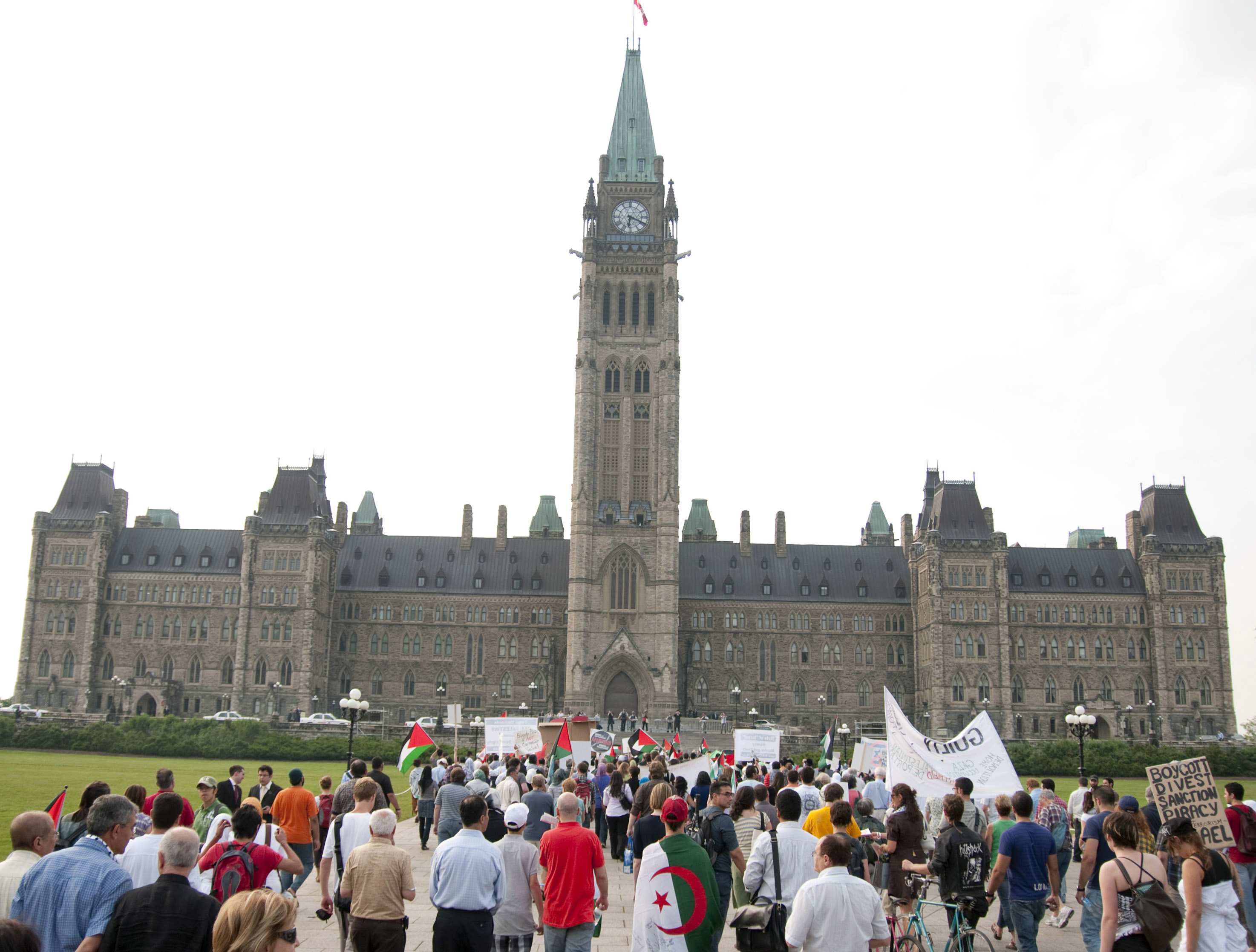 OTTAWA— "Intifada, Intifada," the Arab word for "uprising," was one of the proclamations yelled by hundreds of pro-Palestinian demonstrators gathered yesterday in front of the Human Rights Monument on Elgin Street, Ottawa.

What started as a local protest against Israeli Prime Minister Benjamin Netanyahu's visit to Canada—a tour of Toronto and Ottawa—ended up being one of many world-wide anti-Israel protests in light of yesterday’s violent clash between the Israeli Navy and activists on board a Gaza-bound humanitarian aid flotilla.

“Given that Canada is eager to put sanctions on some countries and puts a blind eye on Israel, a terrorist state, it is particularly important for people in Canada to speak up, to show solidarity, because of what our government is doing, which I don’t think is in line with the majority sentiment of Canadian people,” said Johan Boyden at the Ottawa demonstration.

Boyden, General Secretary of the Young Communist League of Canada and a candidate with the Communist Party of Canada, arrived in Ottawa from Montreal with a busload of people, to show solidarity with the Palestinian people.

“There wouldn’t be a struggle if there wasn’t an occupation,” Boyden continued. “I think that if the occupation would end then justice and peace could be possible in the Middle East.” Boyden added, “We need a real break from the Harper-Tories foreign policy in Israel.”

The protest attracted people of many different backgrounds: Palestinians, Arab-Canadians and Jewish Canadians—including Neturei-Karta who are ultra-orthodox Jews who object to Israel as a Jewish State. Many of the protesters travelled from Montreal and Toronto, having participated in the Toronto protests during Netanyahu’s visit there.

“Let me say it is not anti-Semitic to say Netanyahu is guilty of war crimes,” said a member of the National Steering Committee of Independent Jewish Voices, Dylan Penner, to the emotional crowd at the Human Rights Monument.

Clad in keffiyas, waving Palestinian flags and bearing signs calling Israel a violator of human rights (amongst other things) the crowd cried repeatedly, “No justice, no peace!”

“Shame on them!” cried Arnold Olson, a First Nations Canadian. Olson says that what the Israeli government is doing to the Palestinians is what the Federal government has been doing to the Native people of Canada.

“Israel proved that solidarity at no cost is no solidarity at all. We can get killed for just standing up for our people,” says Laith Marouf, a member of the Free Gaza Movement, who travelled here from Montreal.

Benoit Renaud, of the General Secretary Quebec Solidaire, spoke to the crowd saying what happened yesterday on the Mavi Marmara ship that was bound to the Gaza Strip created a symbol of what the Israeli state is capable of.

“If there was any doubt, the doubt was lifted now and the state of Israel has shown its true face, the face of barbarism,” he said.

In the back of a sea of Palestinian flags and protest signs stood a lone young man sternly holding up an Israeli flag, the size of a small notebook. The man refused to comment or identify himself.

Traffic on Elgin and Wellington Streets was blocked by police when the crowd moved North from the Human Rights Monument up to the steps of Parliament to protest Harper’s unwavering support of the state of Israel and its policies.

The protest culminated with the burning of a makeshift Israeli flag in front of the Israeli Consulate on the corner of Albert and O’Connor Streets, a few minutes’ walk from the Parliament buildings.

When asked about the act of the burning of the Israeli flag as sending a message of violence rather than peace, activist Marouf replied that there is no peace without justice.

“What does the burning of the flag say to Israel? It says: Stop your crimes,” Marouf said.

“Everybody has a right to a state as long as they don’t kill other people, displace them, and steal their land. They [Israelis] have the same rights as everybody else on this planet, and they have to abide by the same rules.”

Hadas Parush is a photojournalism student at Loyalist College. All photos by Hadas Parush.