No treaties are mentioned, the word "consent" does not appear, and much more
by
David Gray-Donald 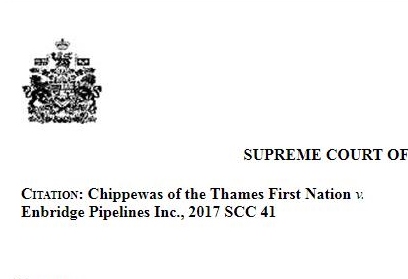 Last week, the Supreme Court of Canada announced its decision regarding Enbridge’s Line 9 pipeline. The Chippewas of the Thames First Nation, located near London, ON, had argued that due process had not been followed in the government approving significant changes to the existing pipeline. The Supreme Court ruled against the Chippewas’ of the Thames, and in favour of the National Energy Board and, in effect, Enbridge.

From a close reading of the Supreme Court decision, many glaring issues become apparent. Six of them are summarized here.

1. Aboriginal and treaty rights are mentioned by the Supreme Court, but no specific treaties are named or discussed.

Central to this case is Section 35 of the Canadian Constitution Act of 1982 (the Charter). It’s first point reads:

35. (1) The existing aboriginal and treaty rights of the aboriginal peoples of Canada are hereby recognized and affirmed.

In the Line 9 case, the Supreme Court mentions “Aboriginal and treaty rights” twenty times, but never once explores which treaties are relevant, what they say, and what that mean for this case. What of the Two Row Wampum, the Treaty of Niagara (1763), the Royal Proclamation (1764), the Longwoods Treaty of 1822, and other treaties the Chippewas of the Thames are party to? If the Court took seriously what Section 35 represents, instead of just taking the simplified text of Section 35, and really explored it, this would require an exploration of Indigenous understanding of the treaties, and thereby of “Aboriginal and treaty rights”. However, the Supreme Court continues to rely on precedent from other Section 35 cases, which are based on completely different treaties (or lack of treaty).

2. The Court admits the original installation of Line 9 was done in contravention of Canadian law, but says that fact is not relevant to this case.

The court decision notes that the original Line 9 pipeline installed in 1976 "was approved and built without any consultation of the Chippewas of the Thames." (Not to mention no consent.) This is an admission by the court that the whole pipeline has been in contravention of Canadian law since it was installed (at minimum, consultation is required). However, the Court conveniently and continuously states that in this case about the Line 9 reversal, "The duty to consult is not the vehicle to address historical grievances." So the pipeline that is illegitimate from the start is, in this case, immune to the fact of the original transgression. Which begs the question: what is the vehicle for addressing historical grievances?

3. The Court admits no one told the Chippewas that the NEB was acting as the Crown until after the pipeline consultation process, but says the Chippewas should have pieced it together on their own.

The crux of the case, in the Supreme Court's eye, is whether the National Energy Board (NEB), a regulatory agency, can fulfil the role of the Crown (the Canadian Government) in decisions that affect Indigenous peoples. On this matter the Chippewa of the Thames First Nation was not told in 2012 that the NEB would be representing the Crown, and so they wrote a letter in protest in 2013 to the Canadian government. The Chippewa's letter was only replied to by the Minister of Natural Resources some months after the NEB process was over in 2014 to say that the NEB was taking on the role of the Crown.

The Supreme Court said this is okay because the Chippewas' should have pieced it together on their own that the NEB was representing the Crown. Though the Chippewa's were never told outright, the Supreme Court says, "In our view, the circumstances of this case made it sufficiently clear to the Chippewas of the Thames that the NEB process was intended to constitute Crown consultation and accommodation. Notwithstanding the Crown’s failure to provide timely notice, its consultation obligation was met."

How had the circumstances “made it sufficiently clear”, you ask? It was because the NEB had said it was the final decision maker on the Line 9 approval. In the Court’s eyes, the Chippewas were supposed to know this meant the NEB represented the Crown, even though the Chippewas continuously said they did not believe this was true during the process and asked the government for clarification and didn’t get it until the process was over.

The take-away here is that the Crown can fail to tell First Nations what's happening for an entire consultation process, expect them to somehow understand, and get away with it.

4. The confusing and highly subjective internal processes of the NEB, which partly disbanded amid corruption scandals, are not criticized by the Court but are in instead used to defend the NEB and the government.

Major energy projects, like new pipelines, cannot be approved only by the NEB, and must go to the federal government (Minister of Natural Resources) for final approval. But because of a loophole called s58 of the NEB Act, the reversal, expansion, and change to a more corrosive product in Line 9 did not need to go the federal ministry. If the NEB deems a change to be small enough, it can decide to be the final decision-maker, and the elected government of Canada doesn’t need to get involved. It was in this way that the NEB became the Crown. If it had to go to a federal ministry, that ministry would be part of the Crown, and be in part responsible for the duty to consult.

Somehow, under the eye of the Harper Conservatives, a major change to one of the largest pipelines in Canada squeaked through the s58 loophole. The scandal-plagued NEB, instead of being criticized for having an opaque and counter-intuitive process, is commended by the Supreme Court for having adhered to this process. The Chippewas of the Thames, on the other hand, are told off for not having understood the implications of the NEB’s strange regulations.

5. The word “consent” is not once mentioned in the decision, though Canada now fully endorses the United Nations concept of “free, prior and informed consent” (FPIC) with Indigenous peoples. This is a Liberal government failure.

Though the word “consent” does not appear, the word “veto” does (paragraph 59).

The two judges authoring the decision decided to highlight paragraph 48 of the 2004 Haida case (over logging on the west coast).  But they only focus on half of paragraph 48 when they say “the duty to consult does not provide Indigenous groups with a “veto” over final Crown decisions”. The second half of paragraph 48 of Haida, which is not referenced in the Line 9 decision, reads: “The Aboriginal “consent” spoken of in Delgamuukw is appropriate only in cases of established rights, and then by no means in every case.”

So, mention of “established rights” gets back to the issue of what is in the treaties (point 1 in this article), and also begs the question “What does the Delgamuukw decision say?” It’s worth pasting a few sentences from the 1997 Delgamuukw case:

“Of course, even in these rare cases when the minimum acceptable standard is consultation, this consultation must be in good faith, and with the intention of substantially addressing the concerns of the aboriginal peoples whose lands are at issue.  In most cases, it will be significantly deeper than mere consultation.  Some cases may even require the full consent of an aboriginal nation, particularly when provinces enact hunting and fishing regulations in relation to aboriginal lands.”

Without a thorough consideration by the Supreme Court of the content of the treaties and the “established rights”, how did they come to know there was no discussion needed about consent? How did they become so sure of this that they did not need to mention the word “consent” at all?

On this major oversight, Justin Trudeau’s Liberal government deserves much of the blame. Elected almost two years ago on promises of implementing the UN Declaration on the Rights of Indigenous Peoples (UNDRIP), including the principle of “free, prior and informed consent” (FPIC), it is clear Trudeau has not delivered. If free, prior and informed consent was taken seriously by Trudeau, it would be law by now, and the Supreme Court would have to have considered it. The Supreme Court would have to have at least mentioned the word “consent”. Or Trudeau would have admitted the Chippewas had not given consent, and would not have fought against the First Nation in court. But policy has not changed, and under Trudeau’s watch, a backwards Supreme Court precedent has been set.

While the Court was not concerned with matters of consent, it did focus on “meaningful consultation”. Were the Chippewas of the Thames meaningfully consulted, they asked. Leaving aside the obvious limitations of this question for a second, let’s see how the court answered it.

The main message here is that because the Chippewas engaged in the NEB process and got written responses to some questions, they were meaningfully consulted. Nowhere does the Court mention that the Chippewas protested at NEB proceedings and questioned the validity of the whole thing. Nowhere does it mention that offering funding to cash-strapped First Nations for anything is a go-to move to get them involved, and that this shouldn’t be seen as a sign of endorsing a process.

The Chippewas were offered only one process, clearly did not think it was legitimate, asked for clarification (point 3 of this article), heard nothing back during the process, protested that process, and are now told that because they showed up and took money and got written responses to other questions, they were meaningfully consulted.

As part of their conclusion, the Court states, “we find that the NEB provided the Chippewas of the Thames with an adequate opportunity to participate in the decision‑making process”. While it’s clear the Chippewas were not decision-makers in the approval of Line 9, the Court seems to think their being involved in the one-sided process in some formal way, no matter how inadequate, is good enough. That fairly well summarizes the Court’s decision.

One final note with fun (or not so fun) facts:

Though it was a unanimous decision of the nine justices, of the Supreme Court justices who authored the decision, both were appointed by Steven Harper, one of them is a self-described "conservative libertarian," and Enbridge's law firm in this case is the one Steven Harper now works for, Dentons. Go figure. And because the Chippewa's lost, they were ordered to pay Enbridge's legal fees, which means the First Nation is picking up the Dentons tab.