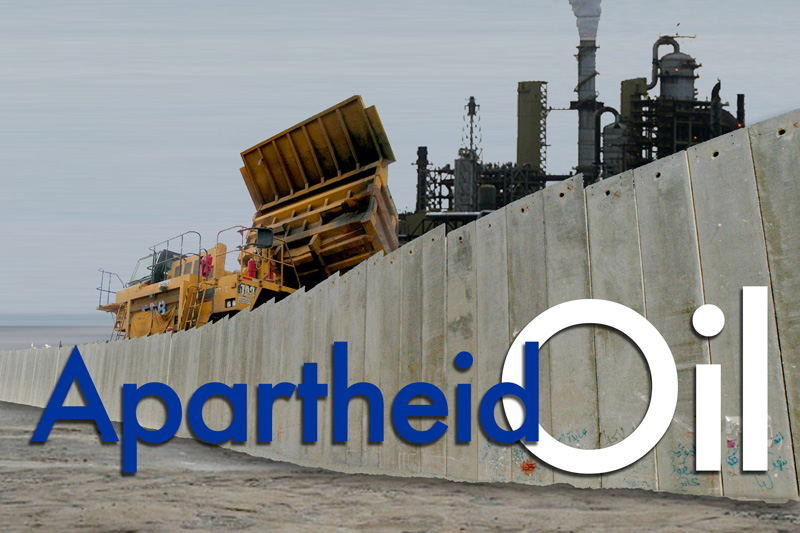 You may have heard of "Dirty Oil", "Ethical Oil", "Bloody Oil" or even "Conflict Oil"-- but have you heard of Apartheid Oil? This is the question that Edmonton based writer and activist Macdonald Stainsby has been asking himself since he visited the Middle East and Northern Africa earlier this year.

In a four part series to be release over the next two weeks, Stainsby examines key shifts in technology and politics that could change the face of oil extraction in Israel/Palestine, Jordan and Morocco. As an introduction to the series, The Media Co-op had a chance to talk with Stainsby about what he learned on his visit, and through the writing process.

Media Co-op: How important are the new shale oil and gas plays in the middle east?

Macdonald Stainsby: The question is fairly technological, as well as geopolitical. If the Israeli plans go ahead for example, it could mean a dramatic shift towards Israeli power and away from the traditional sources of oil in the region. It would take many years for Israel to be able to produce at a level that could undermine other countries, but the impact of proving the ability would be immediate. In the case of Jordan, the question will be the destruction of local water first and foremost, as well as tightening the previous "peace accords" with Israel without repatriating a single refugee. In North Africa, Morocco has the potential to become one of the most polluted countries in the region where environmental standards are already alarmingly low. In each of these cases, it is hardwiring forms of oil production possibly even more destructive than Canadian based tar sands production.

Media Co-op: What surprised you about your time in the Middle East and North Africa?

MS: In all three cases, the biggest surprise was the level of media awareness [about tar sands and shale oil] in the business pages-- which was quite high-- and how little concern it seemed to generate among the population that one would hope should oppose such projects. In Israel in particular, the main opponents are pro-Zionist groups that openly collaborate with sectors of the government involved in ethnic cleansing inside the 1948 borders internationally recognized as Israel.

Media Co-op: Are people aware of what is going to happen because of these projects?

MS: Not really, though community groups near the proposed site in Israel are taking an oppositional, "not in my backyard" approach. Considering the condition of water in Morocco and even more so Jordan, education about the potential dangers to the little water available is paramount.

Media Co-op: How could these new oil and gas plays factor into Boycott Divestment and Sanctions [BDS] and other organizing in Canada?

MS: If BDS is to work, it has to be able to make the Israeli state economically scream, to borrow a phrase. The ability to sanction a state with a massive oil and gas sector is slim to nil. BDS is already having strong effects, but pollution aside, the energy security provided to the state by such a play would be monumental and could be the single greatest enabler of Israeli intransigence for years to come, all the more reason-- along with those other pesky issues like climate change, peak oil and water in desert regions-- such projects must be halted.

Media Co-op: Can you talk about the interconnections between the heavy oil discoveries and the longer term state response to the uprisings in the spring?

MS: It also appears the US is openly planning to use GCC countries-- all of them currently major oil producers-- as a local attack dog in the region for US interests. We saw this with Saudi and Qatari troops invading Bahrain, as well as Qatar openly engaging the adventure in Libya. With Morocco and Jordan invited into the GCC, likely also now to be oil producers-- this locks them into that alliance, which ultimately also serves American and Israeli interests. This could end up having these tar sands and oil shale projects playing major role in global capitals efforts to steer the Arab Spring in the direction they want, again as we have recently seen in Libya.

Stay tuned over the next couple of weeks as the Media Co-op publishes four original stories exploring the theme of Apartheid Oil.