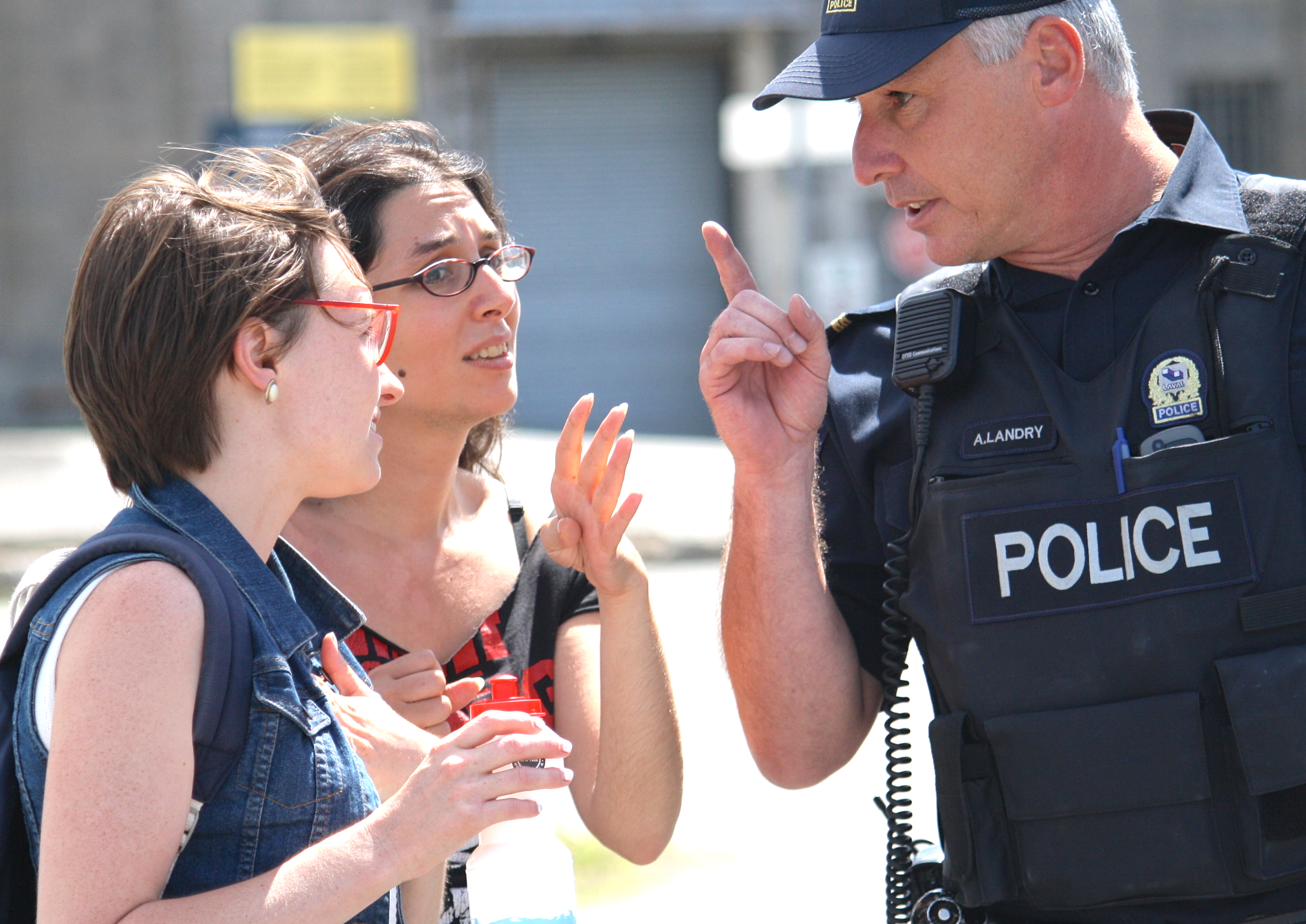 On August 11, over 100 migrants and their supporters brought their outrage to the Laval immigration detention centre just outside of Montreal. Those present denounced the Canadian government's practice of locking up and deporting non-status people, a practice which will increase with the implementation of mandatory detention policies under Bill C-31. Outside the gates, protesters made noise for prisoners to hear, and knocked down part of a security fence.

A campaign was launched in Montreal to help long-time activist lawyer Denis Poitras regain his legal practice, after years of pro bono cases contributed to his recent declaration of bankruptcy. Bankruptcy leads to automatic disbarment from the Quebec Bar Association. Poitras has 1000 cases which will be transferred unless he can regain his practice; supporters are currently raising money for Poitras.

The City of Regina continued to push for water privatization, in spite of a petition by Regina residents to bring the issue to a referendum. Residents succeeded in calling a referendum despite multiple government attempts to thwart their efforts by changing petition rules or disqualifying signatures. Since the passage of the petition, the City has earmarked $340,000 in public funds to the “No” campaign (against public water), with the outspoken support of federal Finance Minister Jim Flaherty. This “test case” on water privatization will go to a public vote on September 25th.

Grassroots members of Thunderchild First Nation, 100 kilometres northwest of North Battleford, Saskatchewan, set up a protest camp on their traditional sundance grounds in early August to prevent seismic testing for the oil industry. Thunderchild First Nation chief and band council filed a court injunction against the women and other band members defending the site. The injunction was upheld by the court on August 17th.
Police harassment on Toronto’s George Street continued as residents of a collective house faced early-morning arrests and intimidation by police allegedly acting on a weapons tip. Police released arrested house members without charge. George Street is described by some as the last obstacle to the complete gentrification of the Allen Gardens district.
A dramatic crash in the sockeye salmon run on the Skeena river took place as less than a fifth of last year's run returned to the central BC river. "If the numbers are the way they are, we've got to close everything down. That's not an easy decision to make. Salmon is our livelihood. That is the soul of our being," said Lake Babine Chief Wilf Adam.

The RCMP set up a camp between a Tahltan protest site and a mining camp in unceded land in central British Columbia. “The first night one of the ladies who is in charge came out and said ‘this is an active mining camp and you can’t be here’ but nobody listened to her and kept on drumming, so she went back,” Iskut band council chief Marie Quock told the Terrace Standard.

Chelsea E. Manning made a statement indicating that she identifies as a woman and prefers female gender pronouns. "As I transition into this next phase of my life, I want everyone to know the real me. I am Chelsea Manning. I am a female. Given the way that I feel, and have felt since childhood, I want to begin hormone therapy as soon as possible. I hope that you will support me in this transition," she wrote in a statement released to the media. Manning, who was formerly known as Bradley, was sentenced to 35 years in prison for her role in leaking State Department documents to Wikileaks.

A federal bill passed in Russia to ban the “propaganda of non-traditional sexual relations to minors” enshrined homophobia into law and sparked international debate over whether or not LGBT supporters should boycott the Sochi Olympics. The Kremlin later passed a law banning protest at the games. In 2010, delegates to Vancouver from the Circassian people indigenous to Sochi called for a boycott because of Russia's role in stealing Circassian land and forcing assimilation policies on local people.

The bodies of ten young men who were kidnapped from a Mexico City nightclub in May were found in a mass grave on the outskirts of the city, along with a further three corpses. At least 27,000 people have been disappeared in the country since 2006.

The Egyptian army massacred hundreds of people demonstrating their outrage against the July 3 military coup. U.S. Congress split on whether or not to suspend $1.3 billion in military aid to Egypt, which they would be required to do if they call the deposition of Morsi a coup. Two Canadians, John Greyson and Tarek Loubani, were arrested in Egypt and are still being held. A third Ontario man, Amr Kassem, was killed by a sniper as he participated in demonstrations.

The drumbeat for a US-led war against Syria escalated. According to a Syrian writer who goes by Darth Nader, "No one armed the Syrian resistance, so they were killed by the regime, or forced to put up with jihadi infiltration. So Assad used chemical weapons against the Syrians, and the West wants to respond to teach Assad a lesson, a response that still guarantees that Syrians have no say in the matter of their future." Guardian columnist Seamus Milne pointed out that "the attack on Syria now being planned by the US and its allies will be the ninth direct western military intervention in an Arab or Muslim country in 15 years."