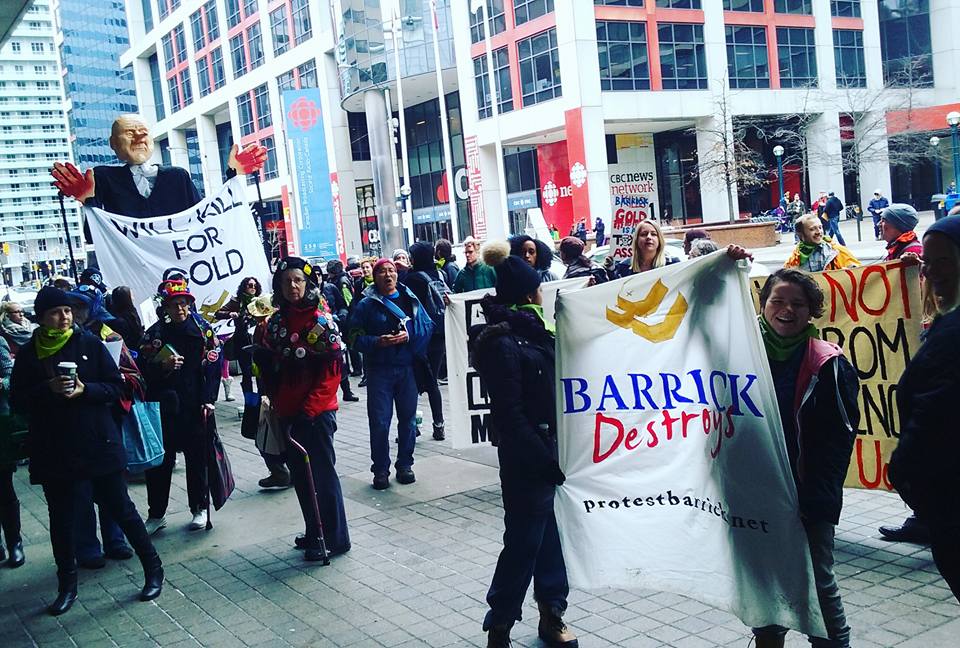 One statement was read from the Asamblea JÃ¡chal No Se Toca (Assembly do not touch JÃ¡chal), which formed in the Argentine mining town after a 1 million litre spill polluted 5 rivers.

"Barrick Gold has ruined our lives," the statement read. "This company has poisoned our water with cyanide solution. Now, the JÃ¡chal River is contaminated with many heavy metals such as uranium, boron, manganese, sulphates, aluminum and arsenic."

The Assembly demands that Barrick's Veladero mine close, and that the land is rehabilitated. They have held a permanent encampment in JÃ¡chal since October of 2015 to protest the mine.

Barrick's Pueblo Viejo mine in the Dominican Republic similarly suffers from extreme environmental contamination. Locals estimate that 2200 livestock have died since 2012 and over 50 people suffer with skin rashes from the mine's contamination.

Proxy holder Klaire Gain, a former Western student who is making a documentary about the Pueblo Viejo mine, explained "community members complain that the pollution from the mine causes nausea, dizziness and vomiting and children are commonly sent home from school due to the toxic odours emitted into the air."

More urgently, Gain insisted that "the El Yagal tailings dam has reached dangerous levels and can not handle more toxic waste from the Pueblo Viejo mine. They live in fear of the tailings overflowing onto their communities."

Outside the meeting, over a hundred people gathered with banners, a marching band and giant puppet to support the speakers inside, confronting shareholders with a wall of sound and chants as they left Barrick's meeting.

ProtestBarrick.net has been working with communities impacted by Barrick's operations since 2007.