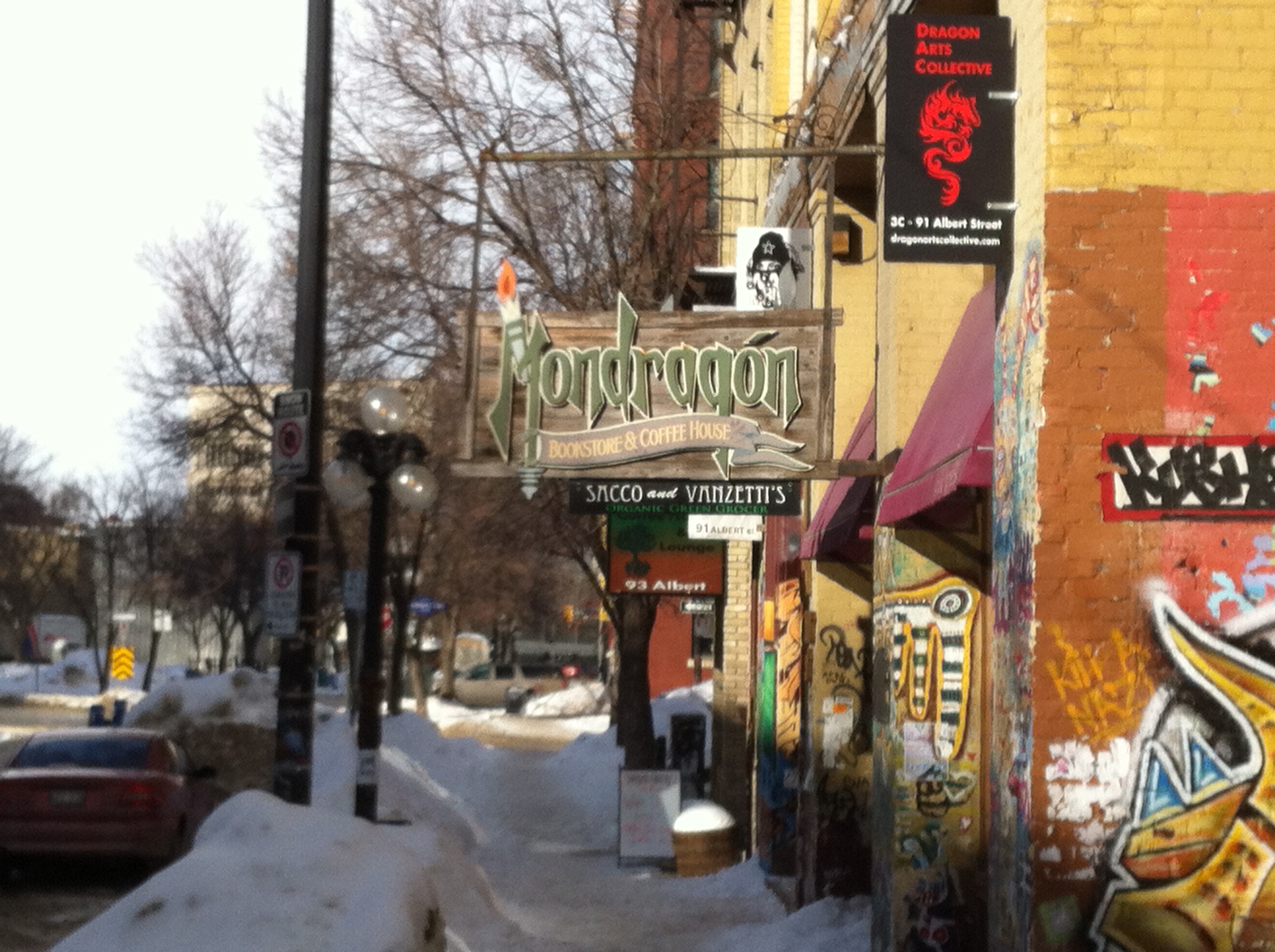 WINNIPEG—After a remarkable 18 years in business, the anarchist collective MondragÃ³n has shut its doors for good, leaving vegan food enthusiasts hungry and radical Winnipeggers and visiting out-of-towners without a rallying space to call home. What started as a cafÃ© and radical bookstore had evolved over the years into a popular restaurant and bookstore, a performance space and an organic grocery. Over time, MondragÃ³n, which was run cooperatively from the get-go, became a space associated with Winnipeg in radical circles in Canada and beyond.

But over the course of 2013, the collective had dwindled to a few core members, business was lacking and money was tight. So tight, according to collective members, that through the fall of 2013 there was not enough money to pay the bills or pay members a decent wage, if any at all.

In the face of member burnout and hard economic realities, the collective made the tough decision to close MondragÃ³n for good. A final week-long book sale gave community members one last chance to help out the collective while enjoying a Dragon Bowl or the perennially popular and delicious Southern Fried Tofu Sandwich.

“I think it’s amazing that MondragÃ³n lasted so long,” Tim Brandt, who operated Heaven Art & Book CafÃ© in Winnipeg in the mid-1990s, told The Dominion. Lately, Brandt has been involved with the anarchist Junto Library and is an active A-Zone member. “An individual, private-owner capitalist would have cut and run ten years ago.”

“MondragÃ³n was an indispensable hub for activists on the left,” Ethan Osland, activist and co-host of CKUW radio’s Black Mask, wrote to The Dominion in an email. “The participatory economics model they employed was a bumpy intersection of radical meets capital.”

Since its first days, MondragÃ³n was cooperatively run on the principles of participatory economics, or Parecon, popularized by Michael Albert and Robin Hahnel as a way of organizing anarchist economic ventures. As such, the intent has always been for all members to be involved in all aspects of the business. While former collective members readily admit that the commitment to Parecon itself created its own challenges over the years, perhaps it was that unwavering commitment to ideology that kept MondragÃ³n running when many profit-driven businesses would have folded.

“The bottom line wasn’t a priority,” founding collective member Sandra Drosdowech told a panel on CKUW’s Black Mask leading up to MondragÃ³n’s closure. “We maintained our vision from the beginning.”

Other challenges the collective identified over the years included the myriad interpersonal problems that any non-hierarchical group (or any group, for that matter) may experience, as well as the burn-out factor that is all too common in activist circles. On top of the particular troubles of running a Parecon-based business, the normal hassles of running “a standard business” were also always in play.

“The politics were always there,” Drosdowech told Black Mask, but the activism upon which the collective was founded could often get lost in the business concerns. It was a balance that the collective struggled with for 18 years.

“It has been a painful loss of safe space for so many,” said Osland. “Although, looking forward, if another space like this happens we need to be far more accessible, both physically and idealistically.”

Currently, MondragÃ³n’s space in the collectively owned A-Zone building at 91 Albert Street sits empty. The A-Zone is keen to fill the space, but so far there is no final word on what will replace the former Winnipeg anarchist institution.

“Winnipeg is a hard fucking place,” said Brandt. “What we lost is a place for inspiring the younger generation. I am sad for that and I hope the new radicals can find a way.”

Sheldon Birnie is a writer, editor and song & dance man living in Winnipeg, MB. Sheldon had many good, inspirational times at the MondragÃ³n over the years.