Canada, the Grave-digger of Kyoto

Canada, the Grave-digger of Kyoto 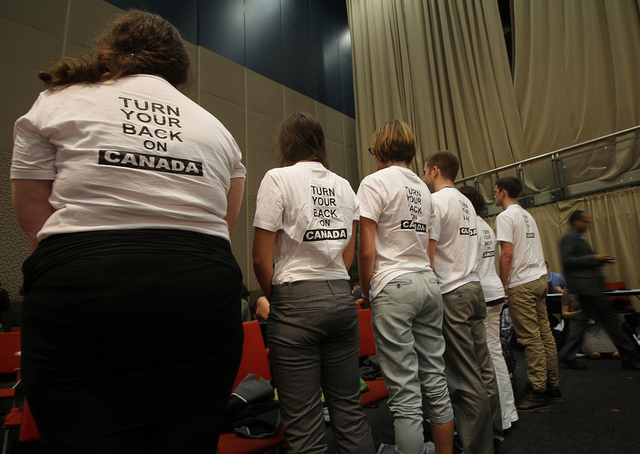 Few issues have united delegates at the UN Climate Change conference in Durban, South Africa. But if you walked the halls of the convention centre and mentioned the name of "Canada," the response was unanimous -- a collective groan and lament. The only time the country elicited anything else was during a silent protest on Wednesday by young Canadian activists, who stood and turned their backs to their Environment Minister as he addressed the assembled countries in plenary. They were hustled out by security, stripped of their accreditation and booted from the building. But the rousing applause they received well eclipsed the muted claps for the Minister.

Canada's global reputation is in tatters, and the reasons why are plain to see. A country with a deep multi-lateral tradition has become a climate unilateralist like no other. It was the Canadian government who fired the opening salvo of the talks, when news broke that they planned to withdraw from the Kyoto Protocol -- the world's only legally binding climate treaty -- the day before Christmas. They promised to "play hardball" with impoverished, developing countries, and dismissed as a "historical guilty card" the demand for industrialized nations to take responsibility for two centuries of emissions. "It poisoned the negotiations," says prominent Nigerian environmental activist Nnemmo Bassey. In a setting in which decisions are made by consensus of all countries, such moves were decisively damaging.

Canada dug the grave for the Kyoto Protocol so the United States could put a bullet in its body.  US negotiators came to Durban with the sole aim of preventing any new binding commitments for carbon reductions before 2020. With the crucial help of Canada -- alongside Russia, Japan and Australia -- it has succeeded. They have shredded the possibility of a viable extension of the Kyoto Protocol, leaving in its place a "Durban mandate" -- finalized in secretive side meetings -- that includes only voluntary pledges for reductions. As ex-Bolivian Ambassador Pablo Solon said in response, Kyoto has turned "into a Zombie without a global figure for reduction of emissions by industrialised countries, and will carry on walking until 2020," when it then dies. Nothing will be done to stave off climate change this decade on the international scale, while the richest nations will lead negotiations for an even weaker agreement to eventually replace the Kyoto Protocol.

The consequences in planetary suffering and dislocation are incalculable. The delays will assure temperature increases of more than four degrees Celsius, and higher on the African continent. "It is a death sentence for Africa," says Bassey. Already, 350,000 people die each year due to natural disasters caused by climate change; this will increase. Our world by the end of the century will be unrecognizable to many -- conflict-ridden, starved of food and deprived of water, and bursting with millions of climate refugees with no place of their own to call habitable.

If the negotiations spell disaster for the Global South, they have been a boon to the richest corporations of the Global North, whose polluting ways are protected. In a calculated affront to those nations scrambling to create a fair, binding climate agreement, the Canadian government yesterday announced the approval of a gigantic, multi-billion dollar tar sands mine. It is the perfect symbol of the dirty industry's absolute capture of a willing government -- the root cause of Canada's obstructionist and subversive negotiating tactics. So long as the world's richest government gave short shrift to their historical responsibility for climate change, but full license to the wishes of wealthy business elites, little can be achieved at international climate talks.

But there are reasons to hope we can still confront climate change and drastically reduce emissions -- on the home-front. Because of the escalating pressure on the Alberta tar sands -- Canada's largest growing source of carbon emissions -- the Conservative government shielded themselves from scrutiny here in Durban. Unlike every other country, which hosted booths and appeared for public media scrums, Canadian negotiators holed away in their hotel a kilometre from the convention centre, where they held exclusive, tightly managed press conferences. By mid-week, they simply stopped holding them altogether.

The Canadian government knows that manifestations of people power are growing across the world and in the country, and it gravely worries them. The power of a burgeoning climate justice movement in the United States forced Obama to delay the Keystone XL pipeline, which would have carried almost 1million barrels of tar sands oil to Texas. The tar sand's industry is now anxiously eying the TransMountain and Enbridge Gateway pipelines to carry oil to the Pacific. But united Indigenous nations, promising a human "wall" of protest, have forced the government regulating body to delay any decision on the Gateway till the end of 2013, in an attempt to wait out growing resistance. Even the Conservative party's most faithful supporters of the tar sands are balking. A former Energy and Environment Minister, who dismantled the only comprehensive national regulation of the oil industry in the 1980s, has conceded that the power of organized opposition is tremendous: "You can't just bulldoze your way from the oilsands to the coast."

In other words, mass civic resistance works. It is in fact the only thing that ever has. The South Africans who overthrew the apartheid regime know it as well as anyone, and so did a young Indian man who settled here in Durban more than a hundred years ago. Mahatma Gandhi honed his theories of non-violent struggle in campaigns against racism and inequality in this town. Then he returned to India, took leadership of a national liberation movement, and changed the world. Those departing South Africa as the UN climate change conference reaches its dismal end must heed a similar challenge.