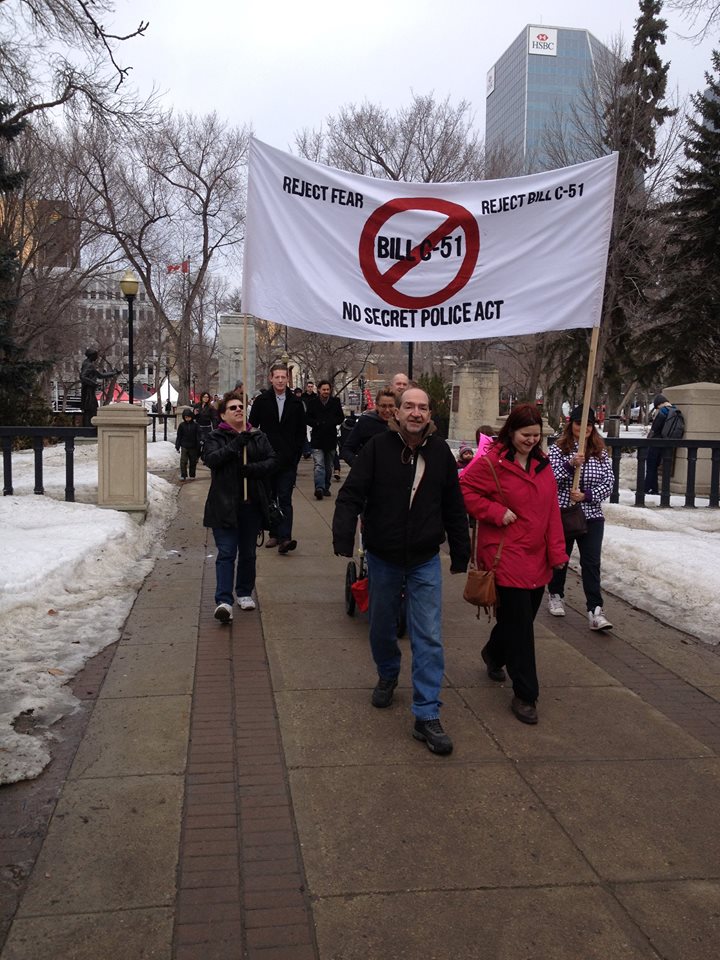 Prior to the 2015 federal election, Justin Trudeau and the Liberal Party voted for Stephen Harper's controversial 'anti-terror' legislation, Bill C-51 while also speaking against it and promising to make changes to it once elected. The bill was opposed by activists from groups across the political spectrum, including human rights groups like Amnesty International, libertarian rooted organizations like the Canadian Civil Liberties Association, environmentalists, advocates for marginalized people, and indigenous leaders, especially those in the Idle No More movement at the time.

Bill C-51 was unfortunately passed, with Liberal support, despite mass rallies in cities across Canada, and became the 'Anti-Terrorism Act of 2015'.

The Canadian Civil Liberties Association (CCLA) and Canadian Journalists for Free Expression (CJFE) launched a joint charter challenge of the legislation shortly after.

Once the election was fully underway, the Liberal Party even made their promise to amend Bill C-51 a central platform talking point.

Brought forward by Trudeau's Minister Of Public Safety and Emergency Preparedness, Ralph Goodale, Bill C-59 was supposed to remedy the problems with Bill C-51. According to many advocates, it does fix some problems while making other problems worse, and overall it expands the powers of police surveillance even more than C-51. At one point, the Liberals attempted to limit debate on the bill and fast-track it into a committee.

The problems with the new bill are numerous;

As the BC Civil Liberties Association list of 'Nine Things You Need To Know About Bill C-59' points out;  "Just as we feared, the government’s “response” to the CSIS spying scandals of last fall is to make it legal and infinitely easier for national security intelligence to collect and use bulk data." The bill also leaves the no-fly system largely in place, with secret hearings and the likelihood of name mix-ups remaining, allows CSIS to continue disruption activities and, more worrying, it actually EXPANDS on police and intelligence agencies ability to conduct cyber-attacks.

Concerns about the bill are addressed in a statement signed by several organizations including Amnesty International Canada, the Canadian Civil Liberties Association and the Canadian Students Federation, released on April 4, 2018;

Bill C-59 was explicitly introduced with the claim that it fixes “the problematic aspects” of its predecessor, Bill C-51—now Canada’s Anti-terrorism Act, 2015.

We, the undersigned civil society organizations and individual experts, are concerned that C-59 does not truly fix all of the problems with our current national security law, and it has introduced some very serious new issues.

The Bill was referred to the House of Commons Standing Committee on Public Safety and National Security (SECU) after first reading, which leaves open the possibility for amendments. SECU has had the opportunity to hear from many of us, and many others, about where Bill C-59 falls short, where it oversteps, and how it can be improved to ensure that it takes a rights-centric approach to national security. The coming days and weeks are a crucial time to speak out.  As Bill C-59 moves through Parliament our government needs to hear from those who think that Canada deserves better and that this legislation can and must protect national security while firmly and unequivocally upholding human rights.

There is consensus amongst civil liberties and human rights organizations about some of the most troubling aspects of Bill C-59. Our concerns focus on: 1) the bill’s empowerment of our national security agencies to conduct mass surveillance; 2) the practical impossibility of an individual effectively challenging their inclusion on the “no-fly list”; and 3) the authorization of Canada’s signals intelligence agency, CSE, to conduct cyberattacks. While these by no means represent the only problems with Bill C-59 that require “fixes”, they are among the areas where change is both urgently required and most broadly supported.

We acknowledge the increase in oversight and review that may be achieved with the creation of a National Security Intelligence Review Agency and an Intelligence Commissioner. However, Bill C-59 also expressly empowers mass surveillance through the collection of bulk data and “publicly available” data – a term that is not clearly defined in the bill in relation to datasets collected by our human intelligence agency, CSIS, and extraordinarily expansively defined for the CSE.  In both cases, “publicly available” is open to interpretations that are as sweeping as they are troubling. In particular, there is no requirement that publicly available information must have been lawfully obtained. In the absence of effective limits in the law, the bodies that have been set up to improve accountability may review or oversee mass surveillance activities, but not necessarily prevent or limit them. The bill also lowers the threshold to allow CSIS to collect information about Canadians – even data that is expressly acknowledged to not relate directly and immediately to activities threatening the security of Canada–if it is “relevant,” rather than restricting collection to information that is necessary. There has been little meaningful debate on whether this lower threshold is necessary or reasonable in light of the goals the government seeks to achieve.

The no-fly list has never been shown to increase aviation safety. Bill C-59 perpetuates a scheme that severely limits rights based on a mere suspicion of dangerousness that cannot be effectively challenged in a fair and open process. The government’s proposed redress system for those mistakenly on a list of people subject to enhanced security screening (“slow fly list”) does not assist those who are simply prohibited from flying. These individuals face a process in which they can legally be denied information relevant to their case, can be denied access to their own hearing and have no right to an independent special advocate with access to all of the evidence against them. SECU has already recommended a number of changes to the no-fly list including the use of Special Advocates. Some of us, and others,  have gone further, and argued for the repeal of the “no fly” system completely. Successive governments have allowed this system to endure for over a decade, and it is imperative that the fundamental rights issues it poses be acknowledged and addressed.

We are seeing our “intelligence” agencies transformed in dangerous directions. C-59 continues to allow CSIS active “disruption” powers and now also gives the CSE new powers to use cyber-attacks against foreign individuals, states, organizations or terrorist groups.  This would include hacking, deploying malware, and “disinformation campaigns”. There is a significant danger of normalizing state-sponsored hacking, not to mention the obvious tension when the agency mandated with protecting our cyber infrastructure is also powerfully incentivized to hide and hoard security vulnerabilities for its own attack exploits.  We need a public discussion about what threats these attack powers are meant to address and what new threats they may open us up to if a Canadian attack results in cyberwar escalation.

Canadians were told that the new law would “fix” the old law.  Instead, we got a bill that nominally addresses some concerns, but exploits the opportunity to introduce more radical new powers for national security agencies.

If the goal of Bill C-59 is truly to “fix” Canada’s national security laws, there is still much work to be done.

To add your voice and send this message to parliamentarians, click here.
For more information on Bill C-59, click here.