Citizens detained for hours in rainstorm as G20 ends

Citizens detained for hours in rainstorm as G20 ends 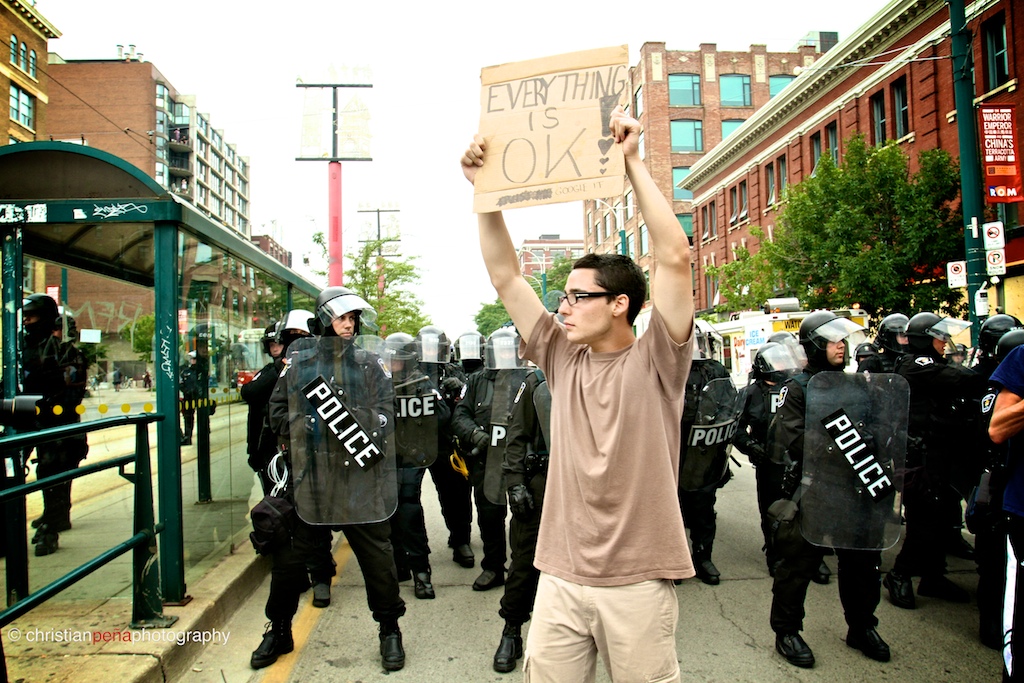 On the final day of the G20 a group of over a hundred people gather on Bay Street for a peaceful protest. Officers used video cameras to film the small crowd of onlookers.

Some protesters were being search and asked for IDs especially anyone wearing black, was a prime suspect. After speaking to some other media including Daniel from a Windsor media group police were seizing gas masks and helmets from press.

At about 4:54 p.m. — a group of cyclists protesting the G20 arrive at Bay and King Sts. They speak to the crowd of hundreds waiting around Bay St for something to happen and shout “Join Us, Join Us” as the group wanted to make there way across the city to Queen and Dufferin to help out a Media Co-op under siege

A group over 300 people joined the group of cyclists, marched from Bay St towards Queen St West to a media co- op in solidarity. They walked up Bay until Queen St W in front of Old City Hall were they were told by head Police in charge to go up north and not walk across Queen St.

The Police in command raised his arm calling for more officers to arrive for support. However with only four Police officers here the crowd decides to move on, as officers couldn’t arrest 300+ people as more have began to join the march. Police looked confused and waiting for orders as they could not control the crowd and watched them pass them by. The peaceful but animated march moves along Queen Street west at around 5:3o pomp avoiding the Toronto Jazz Festival.

Again police on bikes blocked the street in front of the Sheraton and were not allowing the crowd to advance along Queen St west. After some chanting by the crowd and eventually threatening to go north which would mean they might pass through City Hall and the Jazz festival the Police gave in and let them through. People shouted “ Our Streets!”

The crowd in good spirits moves along Queen St West until they reach a row of Police officers on Bikes blocking both south and West streets to protestors. At 5;50pm with nowhere to go except north the crowd began a sit down on the street and clap together.

A surreal carnival atmosphere began to break out now with one man who brought a boom box began playing music and dancing on the street. The crowd began to shout, “we shall not be moved “ and also sang the national anthem in unity.

By 6:00pm riot Squads started to arrive and begin surrounding the peaceful protesters from East of Spadina as the only way out was to the north. At about 6:11pm Police bring out the LRAD sound cannon which has not been used as of yet. There reports on CP24 that the sound cannon and possible gas might be used this time.

At this point I walk north on Spadina to get more information and see what is happening as there still was no communications from Police to crowd. At 6: 18 pm OPP riot squad arrives and moves in quickly and telling everyone to  “move back!” some people were able to get away to safety at this point. While others were looking for a way out were quickly blocked in and by more groups of Police. “ We are trapped where do you want us to go”, one man yelled.

We were not given any instruction and told to wait from several Riot Police, as there was still no representative from the Police and no announcements made. People afraid of getting arrested for doing nothing decided to wait it out, as did most major news reporters, photographers and camera people from CTV, CP24, Canadian Press, etc.

It seem there was no real co-ordination as the North guards didn’t know what the south ones were doing and no real communication here between Police and the citizens many who were innocent bystanders caught in this shakedown. Cops, who promised to let people through, didn’t.

I witnessed members of the Police Unit and some undercover people move towards the crowd as the thought they had came across on of the alleged Black Bloc member.

A group Police and of undercover units began to approached the crowd looking They approached from the East side of Spadina and quickly went into the crowd like black lighting and apprehended a man (in Photograph). However no other takedowns like this were made in the several hours we were waiting

People were seen shaking and very scared as talked to family and friends on their cell phones. By 6:30 pm it had began to rain heavily on the crowd. One young man held up a sign that said, “ Everything will be Ok” as riot cops banged their shields. Riot cops had been slowly going into the crowd and arresting off people one at a time. They even enclosed a hot dog vendor and a woman in an electric wheelchair.

Several people I spoke to also had some medical conditions and a medic had to be called in as they were experiencing breathing problems or hyperventilating.

A disturbing video on Vimeo show that a crowd that gather East of were the Queen St blockade was occurring began singing O Canada and then were later chased down, trampled and in some cases arrested.

As the rains began coming down some people began voluntarily turning themselves in and where told that if they crossed this line that they would be arrested for “Conspiracy to Commit Mischief “and processed right there on the raining streets.

It was 7: 30pm now and at least 100 were arrested and about 50 bikes were left on the sides of the road and later taken in a large truck to the Eastern Detention Centre. The whole intersection is completely blocked off by Police.

•7:40 p.m. — Witnesses say many of the people being swept up in bust at Queen and Spadina are innocent bystanders. Apparently a few dozen protesters staged a sit in at the intersection and a crowd of people gathered to watch. Cops moved in and arrested everyone.

By about 8pm after all major media at this point had left the scene I along with many other began to line up to be taken away by Police as the rains kept falling harder at this point. They informed us only now that if we lined up we would be questioned our ID’s checked and then possibly let go, however this information was not given hours ago when I asked several POLICE as one kept telling us to wait for instructions.

As it was my turn to walk through I was handcuffed and told I would be charged with Conspiracy to Commit mischief and would be detained until my ID and story could be check out.  While waiting in line of detainees I could here the story behind me of a tourist from Germany staying with friends just 3 blocks from the scene. He was worried as he had no ID and was just walking home with friends but instead of taking Richmond they decide to walk along Queen St.

It was 9:00pm and at least 100 were arrested and about 50 bikes were left on the sides of the road and later taken in a large truck to the Eastern Detention Centre. The whole intersection is completely blocked off by Police. I could see Paddy wagons line the street on Spadina south of Queen , and TTC buses waiting to transport up those who have been arrested to the Eastern Ave denetion centre.

At about 10pm the people in the TTC bus ahead of our bus and us were finally released. The rained soaked citizens in the bus were relief to be let go after the 5+-hour ordeal.

Late last night Toronto Police Staff Superintendent Jeff McGuire made a statement to the press explaining why for the hours hundreds of people spent in the drenching rain boxed in by police. “We’re not suggesting we’re perfect.”. Police are defending their decision to detain hundreds of people including both protesters and unlucky bystanders — for hours during a heavy rainstorm at a downtown intersection last night.

Later today there will be a Jail solidarity rally at 5:30pm at Police Headquarters, 40 College Street at Yonge Street.