Citations from original sources 1910-1920
by
Alexandra Kollontai and others
This post has not been approved by Media Co-op editors! 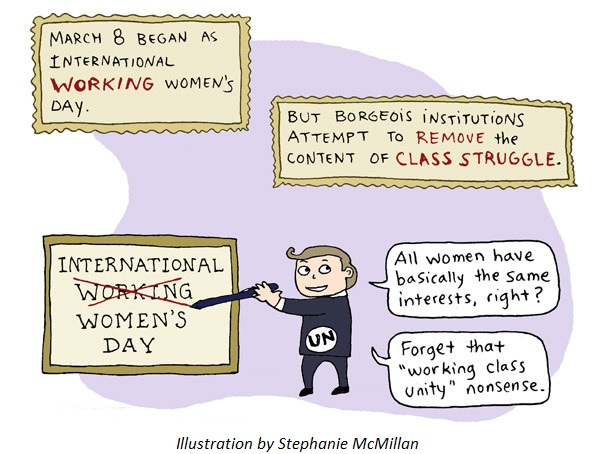 "What is the aim of the women workers? Their aim is to abolish all privileges deriving from birth or wealth. For the woman worker it is a matter of indifference who is the 'master' a man or a woman. Together with the whole of her class, she can ease her position as a worker." - Alexandra Kollantai, 1913

These three source documents from the origins of International Women's Day highlight its working-class, anti-bourgeois and anti-capitalist intent.

The full series of IWWD illustrations from Stephanie McMillan are available at at http://www.redwedgemagazine.com/red-wedge-comix/for-international-working-womens-day

An excerpt from the 1913 article by Alexandra Kollantai in the Pravda newspaper in Russia, one week before the first March 8th international Women's Day (February 23 in Russia, using the Julian calendar) - "Day of International Solidarity among the Female Proletariat".
https://www.marxists.org/archive/kollonta/1913/womens-day.htm

On 'Women's Day' the organised demonstrate against their lack of rights.
But, some will say, why this singling out of women workers? Why special 'Women's Days', special leaflets for working women, meetings and conferences of working-class women? Is this not, in the final analysis, a concession to the feminists and bourgeois suffragettes?
Only those who do not understand the radical difference between the movement of socialist women and bourgeois suffragettes can think this way.
What is the aim of the feminists? Their aim is to achieve the same advantages, the same power, the same rights within capitalist society as those possessed now by their husbands, fathers and brothers. What is the aim of the women workers? Their aim is to abolish all privileges deriving from birth or wealth. For the woman worker it is a matter of indifference who is the 'master' a man or a woman. Together with the whole of her class, she can ease her position as a worker.
[...]
For bourgeois women, political rights are simply a means allowing them to make their way more conveniently and more securely in a world founded on the exploitation of the working people. For women workers, political rights are a step along the rocky and difficult path that leads to the desired kingdom of labour.
The paths pursued by women workers and bourgeois suffragettes have long since separated. There is too great a difference between the objectives that life has put before them. There is too great a contradiction between the interests of the woman worker and the lady proprietress, between the servant and her mistress... There are not and cannot be any points of contact, conciliation or convergence between them. Therefore working men should not fear separate Women's Days, nor special conferences of women workers, nor their special press.

A follow-up excerpt, from Alexandra Kollontai's 1920 look back ot the origins of "Working Women's Day":
https://www.marxists.org/archive/kollonta/1920/womens-day.htm

Women’s Day or Working Women’s Day is a day of international solidarity, and a day for reviewing the strength and organization of proletarian women.

But this is not a special day for women alone. The 8th of March is a historic and memorable day for the workers and peasants, for all the Russian workers and for the workers of the whole world. In 1917, on this day, the great February revolution broke out. It was the working women of Petersburg who began this revolution; it was they who first decided to raise the banner of opposition to the Tsar and his associates. And so, working women’s day is a double celebration for us.

Socialists in North America insisted upon their demands for the vote with particular persistence. On the 28th of February, 1909, the women socialists of the U.S.A. organized huge demonstrations and meetings all over the country demanding political rights for working women. This was the first “Woman’s Day". The initiative on organizing a woman’s day thus belongs to the working women of America.

In 1910, at the Second International Conference of Working Women, Clara Zetkin [3] brought forward the question of organizing an International Working Women’s Day. The conference decided that every year, in every country, they should celebrate on the same day a “Women’s Day” under the slogan “The vote for women will unite our strength in the struggle for socialism".

... in the last years before the war the rise in prices forced even the most peaceful housewife to take an interest in questions of politics and to protest loudly against the bourgeoisie’s economy of plunder. “Housewives uprisings” became increasingly frequent, flaring up at different times in Austria, England, France and Germany.

The working women understood that it wasn’t enough to break up the stalls at the market or threaten the odd merchant: They understood that such action doesn’t bring down the cost of living. You have to change the politics of the government. And to achieve this, the working class has to see that the franchise is widened.

And, the above-referenced motion from Clara Zetkin (and others) at the Second International Conference of Socialist Women (August 1910 in Copenhagen):
https://archive.org/details/InternationalSocialistCongress1910SecondInternationalConferenceOf

To Point 3 of the Agenda - Practical Work in Favor of Universal Suffrage.
[...]

2. [...] In agreement with the class-conscious political and trade organizations of the proletariat in their country the socialist women of all nationalities have to organize a special Women's Day, which in first line has to promote Women Suffrage propaganda. This demand must be discussed in connection with the whole women's question according to the socialist conception of social things. The conference must have an international character and be prepared with care.