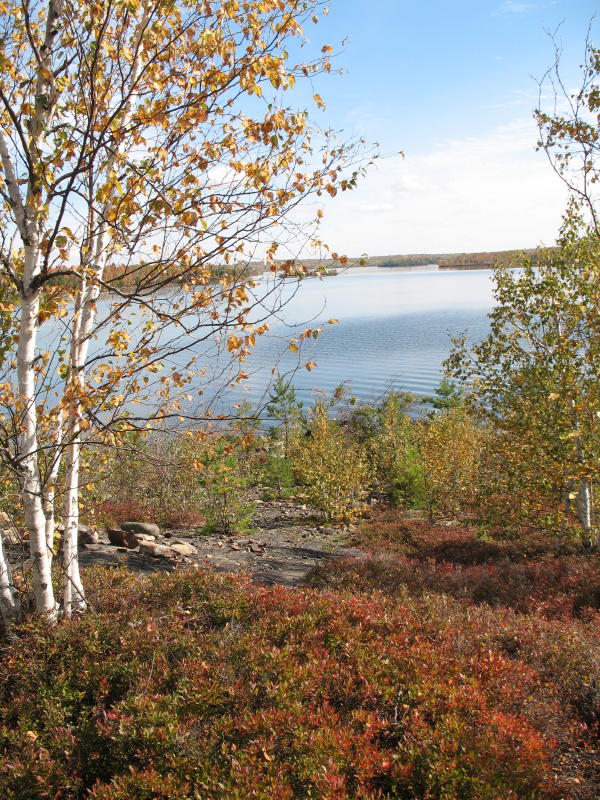 On February 11, approximately forty citizens were in Council Chambers for the first of two Public Hearings for a proposed development on the Keast peninsula, in the South Bay area of Ramsey Lake.  Currently zoned “Future Development”, the application requests a zoning change for the property to allow low and medium density for 63 residential lots and three condominiums in the proposed plan of subdivision.

Concerns over impacts on Ramsey Lake were top of mind.  Many residents spoke about the value of the lake and the stresses already evident.  “When Ramsey Lake suffers, we suffer,”  said Mark Browning who described Ramsey Lake as the cornerstone of what makes Sudbury beautiful, and already suffering with blue-green algae and  E. coli.  John Lindsay explained that since he did not have a camp, he swam in Ramsey Lake, like many residents from all over the city.  “This lake is not just a lake for south shore residents, it’s a lake for all of us,” he stated.  Ramsey Lake is also a drinking water source for approximately 40% of Greater Sudbury residents.  “I don’t live on Ramsey Lake, but every time I turn on my tap, that’s where my water comes from,” Steve May said.   Frances Caldarelli, Councillor for the area, summarized the values attributed to the lake, describing it as “our drinking water”, and “a wonderful lake that we use for so many things.”  “We don’t want to see this lake destroyed,” she declared.

Lack of information to properly assess the impact of the proposed development was repeatedly raised as a serious concern.   Lilly Noble, speaking on behalf of the Ramsey Lake Stewardship Committee, said that a proper watershed study was needed to know where the problems are.  She added it was difficult to assess the impact when the studies needed to do so were not completed.  Elizabeth Bamberger noted that a number of relevant reports are expected in the near future, including a revised Official Plan, a lake capacity model, and source water protection policies.  She felt it would be best to defer the decision until these reports were received, had been in the public domain for at least 60 days, and had been reviewed by independent experts.  Gregory Dalton was among many others who echoed the need for an open and transparent process that gave people adequate notice, and a chance to respond to relevant studies.   Councillors Caldarelli and Dutrisac voiced their support for having all the studies needed to make an informed decision, and to have them publicly available, giving residents the opportunity to review the information, provide input, and consult with experts if needed.  Councillor Caldarelli reiterated the importance of making sure “we’re all getting the best information possible.”

Urban stormwater run-off is a primary contributor to degradation of lake water quality, and concerns over stormwater management were also raised repeatedly.  “Water quality is of paramount importance.  A functioning stormwater management plan is essential.,” said Peter Villa.  He went on to share detailed information on the impacts of stormwater run-off which carries fertilizer, oil, salt and other contaminants that would go into Ramsey Lake.  Coalition for a Liveable Sudbury emphasized that there was no acceptable plan for stormwater management included with the application.  The proposed stormwater pond is located in a wetland and floodplain, contrary to Ontario Ministry of the Environment guidelines, as flagged in the preliminary staff report.  “We’ve heard that a wetland will be replaced by a stormwater pond.  It’s 2013.  That’s just ridiculous,” said Steve May.  “Stormwater management should work in harmony with wetlands,” declared Peter Villa, who also raised concerns with the Vortechs system endorsed by staff as an environmental control system.  He presented a recent research paper showing that it should be used as a pre-treatment system only, not as a stand-alone system.  The proponent, Norm Eady, countered that all concerns regarding stormwater management could be mitigated.

In fact, Norm Eady repeated several times that his proposed development would benefit water quality.  “Everything I am doing is going to increase the quality of Ramsey Lake,” he asserted.   The main basis for this assertion was the provision of water and sewer service which he says would result in area residents currently using septic systems being linked to city sewer service.  “Everybody is polluting the lake right now,” he said of area residents.  The amount of actual contamination from existing septic systems and the number of area residents that would connect to city sewage service if the development were to go ahead is not known.  Klaus Jakelski stated that his analysis of the modelling used for the draft Sudbury Source Protection Plan indicated that the risks associated with current Keast area septic systems were miniscule compared to those associated with the proposed development.  In their comments on the application, the Nickel District Conservation Authority identified septic systems, sanitary sewers, stormwater infrastructure, application of road salt and application of fertilizers as activities that would be drinking water threats in this area.

Norm Eady reiterated that all concerns related to stormwater run-off could be mitigated with stormwater management.  However, no stormwater management system removes all contaminants generated.  The ‘Enhanced Protection’ standard recommended by city staff removes an average of 80% suspended solids, and can be expected to remove approximately half of the phosphorus.

Conditions specific to the site aggravate potential risks from run-off.  Development where there are steep, rocky shorelines and shallow soil leads to increased erosion, increased sedimentation along shorelines, increased phosphorus loading and increases in lake water temperature resulting in problems such as blue-green algae blooms.  These conditions also aggravate the impacts of removing vegetation, and make it very difficult to mitigate erosion, siltation, and phosphorus loading.   Norm Eady stated that with all the bald rock on the property, the rainfall is now going directly into the lake, apparently making the error of equating natural run-off with a risk to lake water quality.  “When the lots go for sale, noone is going to live on bare rock,” he said, claiming that he was adding greenspace to the property because people would be putting in yards.  Adding soil during development can cause a pulse of phosphorus entering the lake.  John Lindsay cited the example of extremely high phosphorus levels entering Ramsey Lake at Frobisher Creek, coinciding with development upstream. As reported in the Northern Life and CBC in December of 2011, Laurentian University biology master's student Jaimee Bradley recorded phosphorus levels up to five times higher than provincial standards.at that location.

In the staff report, Environmental Planning Initiatives described the property as “forested with mature trees and shrub cover,” noting that existing vegetation acts as an important buffer for the lake.  Other environmental concerns raised included the presence of wetlands, impact on sensitive fish habitat, and potential habitat for two species at risk.  Norm Eady seemed to dismiss these concerns saying that there were ‘only about 600 trees left’ and that there were ‘no wetlands’.  In a strange moment during his closing comments, he went through some items from a list of the “principles of smart growth’ from a local environmental group’s website, attempting to argue that the proposed development was consistent with principles such as protecting green space, changes in the planning process, complete communities, and active transportation.  For those familiar with smart growth principles, these arguments seemed far-fetched at best.

More pertinent to the planning decision to be made, however, is the question of whether or not the proposed development is consistent with the policies in the city’s Official Plan and the Provincial Policy Statement.   Steve May declared that the application did not meet that test.  The Provincial Policy Statement is very clear that no development is permitted in floodplains, where residential lots, a sewage lift station, and a stormwater management area are proposed.  In his judgement, the subdivision must be rejected on this basis alone,

The proposed development contains reduced lot frontage and other concessions available through a Comprehensive Planned Unit Development (CPUD).  The goal of a CPUD is to preserve natural features, green space and public amenities on the site.  As Councillor Caldarelli stated, the proposed development did not seem to contain anything that would meet these goals.  Coalition for a Liveable Sudbury submitted a summary of non conformity (see attached file) with Official Plan policies for the Ramsey Lake Policy Area, CPUD requirements, environmental policies, and other significant concerns raised to date.

Beyond these specific concerns, a clear message was that it is imperative to look at the big picture for Ramsey Lake, which means considering cumulative impacts within the watershed.   From information available on the City website, within the Ramsey Lake subwatersheds there are 596 draft approved lots, an additional 763 units recently approved, and 192 lots under appeal at the OMB.  The proposed Keast development adds another 72 units.

Councillor Caldarelli declared, “we cannot look at this application in isolation.”    She noted that that is difficult because applications come before the planning committee one at a time, but that it was “time for Council to step back and decide what we want for our lakes.”  Mark Browning suggested the city should consider a moratorium on development in the watershed, and Councillor Caldarelli indicated this idea could have merit.  “Do we really want to continue this intensification on our lakes?” she asked, “It puts them at peril.”

Watershed studies are the generally accepted practice for looking at the big picture for water quality and urban planning decisions.  The Ontario Ministry of the Environment, in their stormwater management design guidelines, states, “Urban development without watershed/subwatershed planning is discouraged”.  No watershed studies have been completed in Greater Sudbury.

Norm Eady dismissed the concerns raised during the Public Hearing saying that fully half of the neighbours were in favour and that “99% of the concerns have been addressed.”  He stated that his proposed development was “good for Sudbury” and that it was “obvious unless you had a vested interest.”  He brushed off many of the points raised as “ridiculous” and admonished people to “stick to the facts,” calling the submission by the Ramsey Lake Stewardship Committee “all fabrication.”  He warned that if the development was not approved he “will go to the OMB to fight it.”

No date was given for the second Planning Hearing when a decision will be made by the Planning Committee.  Citizens will have the opportunity to speak at this hearing, and can submit input at any time prior to that (sent to:  clerks@city.greatersudbury.on.ca).  A final decision will then be made by Council.  Citizens also have the opportunity to submit input regarding wider concerns on lake water quality through the Official Plan Review (submitted to officialplan@greatersudbury.ca).  Some of the desired changes discussed at the Planning Hearing would require changes to the Official Plan.  Looking at the ‘big picture’ for Ramsey Lake and other lakes by requiring watershed studies to be completed before consideration of development is one example.