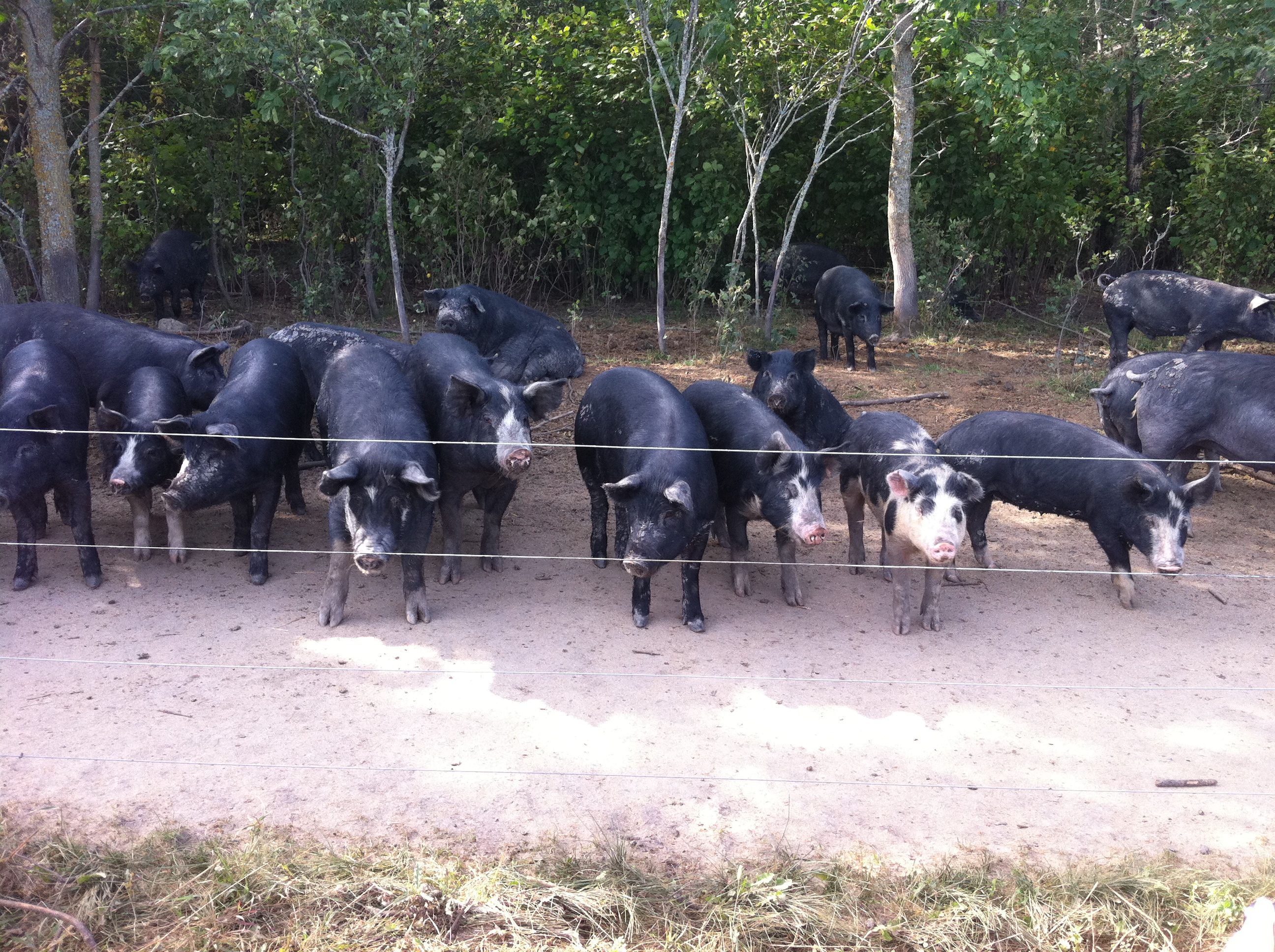 WINNIPEG—Small scale producers in Manitoba are facing challenges in developing specialty meat products for market. While the provincial department of Agriculture, Food, and Rural Initiatives (MAFRI) is championing local food -- sponsoring events like the Great Manitoba Food Fight and highlighting Manitoba products in major grocery chains -- the regulatory framework is designed for large scale, export based agriculture and not smaller scale farmers.

Perhaps the most dramatic example of this can be found in the recent events in the small farming community of Pilot Mound, in southwestern Manitoba.

Clint and Pam Cavers, along with their three daughters, have operated Harborside Farms outside of Pilot Mound since 1997. The family lives at Harborside, raising cattle, pork and poultry. They butcher and process the meat on site to sell to customers who value a direct connection to their food.

“I guess [our farm] does not even compare to conventional pig farming,” Pam Cavers tells The Dominion via email. “[Conventional] farrowing barns are huge. Like hundreds of breeding females in one barn... We have around 45 breeding females.”

Harborside specializes in pasture-fed heritage livestock breeds. The result, according to the Cavers, is “juicier and richer-tasting than most pork, and perfect for grilling.”

Harborside’s customers include a number of restaurants in Winnipeg who make a point of preparing local food, like Pizzaria Gusto and Bistro 7, as well as members of community-supported agriculture (CSA) organizations like the Harvest Moon Society.

The Cavers have found themselves front and centre in a real food fight with the regulatory side of MAFRI over small scale production of specialty deli meats.

Currently, there are no specific regulations that pertain to what the Cavers, and other small scale producers, are trying to do in Manitoba. Local food advocates argue that the Canadian Food Inspection Agency (CFIA) rules are designed for large scale processing plants, like the Maple Leaf hog plant in Brandon, MB, which processes up to 85,000 hogs a week.

Local food advocates maintain that processing regulations that ensure food safety on a large, industrial scale are not only unrealistic for small producers, but financial costs can be prohibitive.

British Columbia. Brynne believes that while food safety is paramount, regulators need to develop methods of dealing with small producers, like the Cavers, that won’t irreparably damage their businesses. “We’ve seen Maple Leaf foods and others like them recover from millions of pounds of recalled meat. But a small enterprise may not recover from 3000kg of recalled meat.”

Clint Cavers agrees. “We take a hell of a lot more care in what we do than someone who works an eight-hour shift at a plant who goes home and doesn’t think about his job anymore,” he told the Dominion over the phone from Pilot Mound. “This isn’t just a job for us. This is our life.”

“We like food culture,” Cavers explained. In 2011, after getting requests from some friends in Winnipeg for a local source of specialty deli meat – like prosciutto, an Italian deli meat, and other charcuterie popular among high end restaurants in Winnipeg – the Cavers began to develop a process at their facility to provide for the demand.

At that time, the Cavers got in touch with their local MAFRI office in Pilot Mound, in an attempt to work within provincial guidelines. The problem, according to Clint Cavers, was that no regulations exist within Manitoba for small scale, commercial dried meat production. Under the provincial Food and Food Handling Establishments Regulation sec 19(1), by default, health inspectors follow CFIA guidelines, which, again are designed with large-scale production in mind.

“We really didn’t make a whole lot,” admits Clint, explaining that he and his wife were still very much in the experimental phase when MAFRI invited Harborside Farms to enter their locally made prosciutto in the 2013 Great Manitoba Food Fight, a provincially sponsored competition for “Manitoba food entrepreneurs who have developed but not fully commercialized an innovative new food product.”

To the Cavers’ surprise, their pastured pork prosciutto won the gold medal, netting them a $10,000 prize to continue the development of the product for commercialization in May 2013. But shortly after their victory at the Great Manitoba Food Fight in Brandon, Harborside had a visit from MAFRI health inspectors, who told the Cavers to box up all of their products in development and label them “Not For Sale.”

“Then they showed up on August 28th with a seize and destroy order.”

Accompanied by a member of the RCMP, a provincial inspector arrived at Harborside on August 28, 2013 and began seizing Harborside’s dried meats, which had been deemed by MAFRI as “unfit for human consumption” – the same meat that the minister of agriculture had sampled in May, the same product the Cavers’ had been awarded a $10,000 prize for.

Much of the seizure was filmed by a University of Manitoba student, who was scheduled to visit the farm that afternoon as part of the U of M’s Living Rural Communities and Environments course.

Jonathan Ventura, a U of M student who was taking part in the course, instructor Colin Anderson, and another student made their way to Harborside Farms after visiting the nearby Windy Bay Hutterite Colony. They describe a heated situation between the health inspector, the Cavers’, and themselves. At one point, the health inspector waved his badge at them, and demanded that Ventura and his fellow student erase the contents of their camera, and hand over their SD cards, threatening them with legal action.

While Ventura and the other student complied with the unauthorized demands of the health inspector, a glitch with Ventura’s software prevented the footage he accumulated from being erased. Later that evening, he and a group of other students, along with Anderson, began discussions on what they could do to bring the events of August 28th, and the regulatory inequities that small producers in Manitoba face, to wider public attention. A few days later, the website realmanitobafoodfight.ca was launched.

“The response was pretty crazy,” admits Ventura, who initially expected that the attention to the case would fizzle after a few days. Instead, the site received thousands of hits a day, and local media, including the Winnipeg Free Press and the local CBC, began highlighting the story.

In the end, Clint and Pam Cavers lost approximately 160kg of cured meat, and were fined $600 each. The Cavers say they will continue to work with MAFRI in developing specialty products. With their meats destroyed, the issue of a nebulous or non-existent regulatory framework that is clearly problematic for small producers still exists.

“There hasn’t really been a serious discussion within MAFRI about how to frame the regulatory system in a way that supports small farmers,” says Anderson. Anderson, who was raised on a farm near Cypress River, MB, has been working with farmers across western Canada and the United States for over ten years. He believes there is an unwillingness on the part of governments to take action with regards to food safety regulations.

“It’s just so much easier not to change anything,” he told The Dominion in a phone interview. “If something goes wrong, you don’t get blamed for making the change … Which is why MAFRI and government in general now have to catch up.”

On October 9, provincial Minister of Agriculture, Food, and Rural Initiatives Ron Kostyshyn and federal Minister of Agriculture Gerry Ritz announced the 'Growing Assurance – Food Safety On-Farm' initiatives, which aim to “address the safety of food through on-farm procedures and in the processing and distribution sectors.” According to the official statement released by the Manitoba government, financial assistance is to be provided to producers “to adopt assurance systems and best management practices related to food safety issues.”

“We are commited to ensuring food, including local food, is produced in a safe sustainable way,” a spokesperson for Kostyshyn told The Dominion via email. “Our government wants local farmers and food producers to succeed.” On October 18, MAFRI met with small scale producers to discuss related issues. Matt Ramsay, a U of M student who blogged about the meeting, says that while the meeting was “positive,” it didn’t move beyond the realm of “generalities” when discussing food safety.

“The fight isn’t over,” says Anderson. “The inertia of government isn’t keeping up with the changes that people in civil society want. Including not only farmers and producers, but also people who want food. This fight is really not just a bunch of farmers and processors complaining about regulations. It’s about what a whole bunch of people in society want to see happen.”