The Emergence of Sudanese Activism in Cairo

The Emergence of Sudanese Activism in Cairo 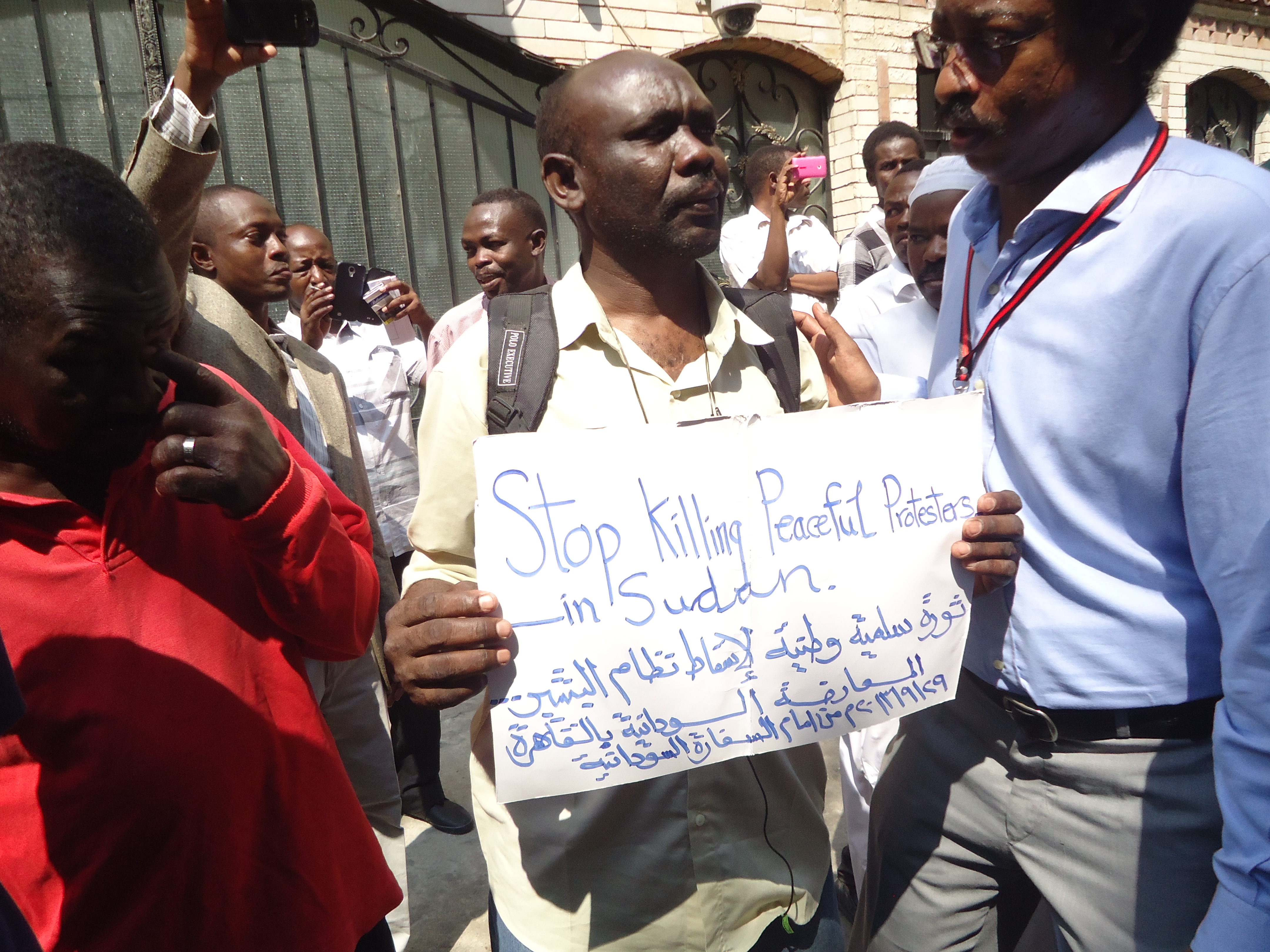 In an unprecedented shift from within the largest African migrant community in Egypt, thousands of Sudanese activists have protested in front of the Embassies of the Sudan. The action has caught on globally as an expression of solidarity in the name of the martyrs who lost their lives during the popular uprising on the 23rd of September (2013). The demonstrations are an outcry and rejection of the Sudanese government's decision to lift subsides on fuel and foodstuff in Sudan.

In order to reform economic life, the government of northern Sudan has made a package of austerity measures, beginning with the lift of the fuel subsides and basic foodstuff. The fundamental aim of the new economic polices of the Northern government is to relief the deficit in the general budget and to discourage the private business sector from importing luxurious commodities. However, the political street in Sudan has confronted these unfair economic decisions on September 23, with spontaneous demonstrations in various parts of Sudanese cities.

These unprecedented public actions confused the security forces in Khartoum, who responded by firing live ammunition into the peaceful demonstrators, killing many protesters and injuring dozens of others. The 23rd of September (2013) protests in Khartoum was composed of a broad cross-section of young people and university students mostly belong to the marginalized population who live in Khartoum, the nation’s capital city.

During The 23rd of September protesters burned a number of petrol stations. The burned petrol stations were supposedly owned by the pro-elements of the ruling National Congress Party in Sudan, who have held the highest seats of authority since June 30, 1989. However, some reliable sources of the Sudanese opposition accused politically affiliated constituents of the government to have been behind the criminal acts of vandalism and destruction of public property.

The burning of fuel stations in the capital Khartoum was intented to give the government a legal justification to eliminate these demonstrations and to run a massive campaign of arresting activists, politicians and those who sympathize with anti-government protests in Sudan. Despite the continuation of these demonstrations for two weeks, it did not turn into a popular revolution to topple Omar al-Bashir for two reasons.

First, demonstrations occurred spontaneously. Secondly, the internal opposition parties did not lead demonstrations. The most important thing to note is that the protesters simply have no strategic plan with which to overwhelm the current regime of tyranny. For example they didn't occupy the vital public squares in Khartoum to disable traffic and call for civil disobedience in all parts of Sudan in order to overthrow the regime.

The example of Egypt, where protestors staged mass public sit-ins against President Hosni Mubarak in the January 25 revolution in Tahrir Square, located in one of the vital areas in Cairo. The occupation of Tahrir Square by the Egyptian protesters had led to a complete paralysis of traffic and disrupted the governmental institutions from its daily work, which resulted in the stepping down of President Hosni Mubarak. In effect, the president declared the end of a dictatorial regime that had continued for thirty years in Egypt. The success of the Egyptian revolution is in its committed leadership and the clear vision of overthrowing president Hosni Mubarak whatever the cost.

Unlike the success of Egyptian revolutionaries, the Sudanese uprising on 23rd of September (2013) failed to topple President Omar Hassan Al-Bashir, who seized power by force on the 30 of June 1989. In solidarity with the martyrs of the 23rd September protests in Sudan, many civil rights activists have organized demonstrations in front of embassies of Sudan in Europe, as well as in the United States. Global solidarity condemns the use of excessive force by the Sudan security forces, and its brutal crackdown on peaceful demonstrators.

In Egypt, a great number of Sudanese activists and politicians have protested in front of the Sudanese embassy in Cairo on September 29, 2013 chanting for freedom and demanding the international community and the security council to put more pressure on the Islamist government in Sudan, to stop immediately the brutal killing of students and peaceful protesters in Khartoum, and to take retract the decision of lifting the subsides of fuel and foodstuff.

The Sudanese protesters in Cairo have demanded from the government of Sudan the release of political prisoners, to stop the bombardment of civilians in Darfur and South of Kordofan, as well as for the instant enforcement of rule of law. The government must work to achieve a comprehensive peace in Sudan.

It is noteworthy to add that Sudanese opposition groups and civil rights supporters based in Egypt were not allowed to protest in front of their embassy when Egypt was under the rule of the former dictator Hosni Mubarak. The former Egyptian president denied the freedom of expression and the right to demonstrate peacefully for Egyptians as well as foreigners in Egypt.

The right for foreigners to demonstrate is one of the slogans and the principles of the 25th January revolution that toppled President Mubarak and put an end to the dictatorial rule in Egypt. The Sudanese are free to express about their ideas and stance of their government under the current interim government in Egypt, more so than during the Muslim Brotherhood’s short, democratic authority. The Muslim Brotherhood in Egypt was politically supported by the Islamist regime in Sudan.

For these reasons the present interim government in Egypt, led by General Abdel Fattah –Elsisi, is supporting the Sudanese opposition with the aim to overthrow the Muslim Brotherhood regime in Sudan, which continues to support the followers of the deposed Egyptian president Mohamed Morsi in secret. Recently ousted Egyptian president Morsi is still claiming himself as the legitimate president of Egypt.

In the meantime many Sudanese political analysts and observers of the political crisis in Sudan they believe that the change of the current Islamic regime in Sudan by means of peaceful demonstrations is not possible under the sharp division between supporters of the Al-Bashir regime. The current political and social milieu in Sudan favors the survival and the continuation of Al-Bashir as head of state, despite his brutality, simply because he is the symbol of an Arab-Muslim president.

Equally, as abroad, sectors of Arab-Islamic Sunni elite, and the influential political and economic groups in Sudan prefer President General Omar Hassan Al-Bashir than a straightforward leader. Alternative leadership is sidelined due to its suspected origins from the armed opposition that currently represents the mass majority of the Sudanese population on the periphery. Also, the people of Sudan are further marginalized by their own government, seen by the ruling class as those who descend from the African (Negro) Muslims in Sudan.