Federal NDP fails to live up to its constitution: Courage Coalition

Federal NDP fails to live up to its constitution: Courage Coalition 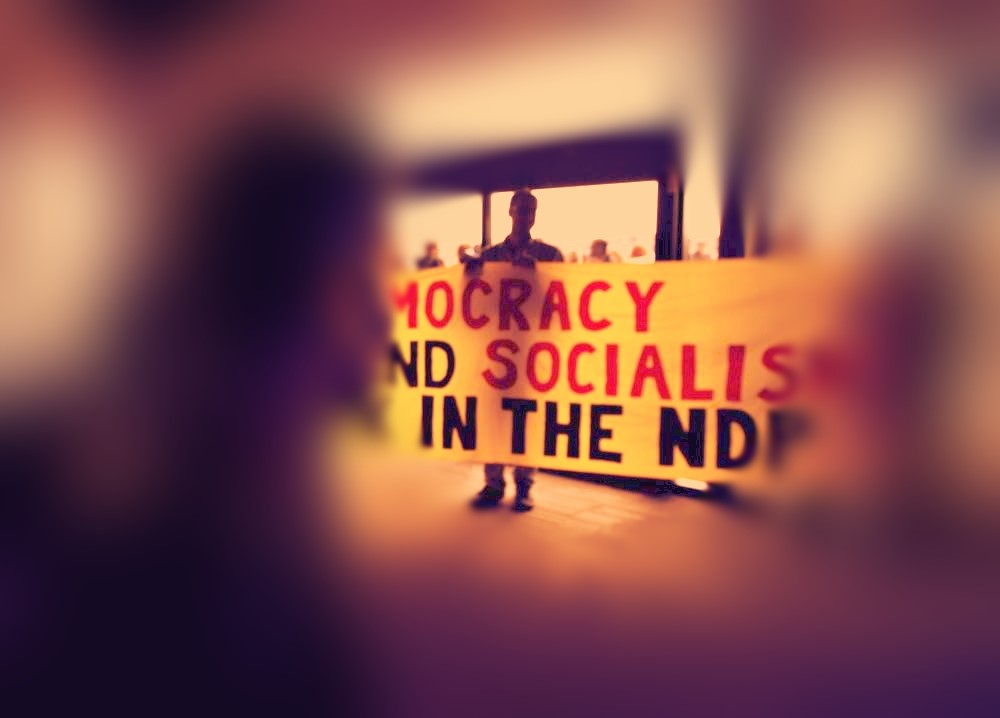 The Federal NDP has failed to include in its 2018 policy handbook 16 of the 29 policy resolutions passed at that year's convention, according to a grassroots group keeping tabs on the party.

In February, the Courage Coalition released a report calling the move by the federal party’s leadership an “unacceptable contravention of the NDP’s Constitution.”

“The party is beholden to the membership via the convention and the policy book,” Emily Quaile, a member of the Coalition, told the Media Co-op in a phone interview. “So, hiding that from the membership, making that opaque...is absolutely anti-democratic.”

According to the NDP’s constitution, “Conventions are the supreme governing body of the Party and shall have final authority in all matters of federal policy, program and constitution.”

Among the passed 2018 resolutions not included in the handbook were a call for universal dental care, abandoning the so-called war on drugs by decriminalizing all substances, paid sick leave, a Federal ban on street checks and carding, support for cooperatives and closing the wage gap. The group has made a spreadsheet of all policies (passed and not) which can be found here.

Quaile said while she couldn’t affirm the reasoning for leaving certain ones out while including others, the ones excluded were by and large “specific...calls to action” that addressed systemic issues, while the 13 passed were more general and “easier (to) fit with existing policy.”

“They don’t rock the boat very much,” she said of the 13 passed.

“What they didn’t include is more specific, and if they put it in the policy book, that might mean that they are actually held accountable to achieve those goals.”

Courage has made their report public on their website, and according to Quaile it was “engaged with by several prominent NDP members, MPs, and EDA (Electoral District Associations),” but they have had “no response” from any of the leaders as of time of writing.

It’s “very disheartening," she said, because their silence is “proving to the membership that they are not interested in remaining accountable, democratic and transparent.”

NDP President Mathieu Vick did not respond to an email asking for comment by press time.

Quaile said the group did “engage” with the NDP MP for Hamilton Centre, Mathew Green, through Twitter, where he tried explaining that the resolutions not included in the book were “policy directives (and) not part of the policy book or policy book amendment.”

But that’s not cutting it for Courage.

“There’s nowhere that actually lays out the definition of what a directive is versus a policy book amendment,” said Quaile. “Political policy is political policy, and we’re arguing that if something is passed at the convention, it must be accounted for somewhere."

Green was not able to respond to an email seeking comment by press time.

Courage’s February report follows a previous January open letter in which the group makes two demands of the NDP related to democratizing the process by which resolutions are chosen, debated and decided upon.

Until 2018, it was the national director who would elect a panel from among federal council members who would then prioritize and choose which of the proposed resolutions brought forward by each EDA makes it to the convention floor. There, Quaile explained, the debate is divided into seven categories or themes of the policy book, and each of those categories is allotted a certain time to be discussed/debated upon. Each category has space for only six to 10 resolutions, at best, she said.

This gave the panel an “immense amount of power” to determine which resolutions to vote on at the convention and thus turn to official party policy.

And it all happened without any oversight, she said.

The panel “would just pick which resolutions they wanted to see, not necessarily following the will of the membership.”

One of the resolutions passed that year was supposed to democratize that process, at least on paper, by allowing members themselves to prioritize and choose resolutions “instead of having it be the secret panel,” Quaile said.

“The title and spirit of this resolution is to democratize and modernize the current prioritization process,” she later elaborated in an email, “which means removing the power currently held by the federal council and office to make that initial prioritization, and giving that power to the membership of the NDP.”

To this end, the resolution – a copy of which was provided to the Media Co-op by Courage – directed the party, in part,  to “disseminate a proposal at least 10 months prior to the next convention via email to local EDAs and directly to members eliciting feedback.” It also resolved that “within four months of that convention, the National Director (would) operationalize an online mechanism for presentation, discussion, and prioritization of policy resolutions.”

Due to the COVID-19 pandemic, the 2020 biennial convention was not held, giving the NDP a whole extra year to address these issues, said Quaile.

Now, with less than a month to go to the 2021 convention beginning April 9, "they have not upheld a single one of their timeline commitments.”

The second demand was to publicize all policy books permanently for all members to have access well in advance of the convention.

The last time the policy handbook appeared permanently on the party’s website was in 2015, when Tom Mulcair ran for Prime Minister.

Since then, Quaile said, the document has appeared on the website only temporarily, just prior to the convention, and then it’s “erased."

The Courage Coalition formed in 2016 and has been fighting to change that ever since.

Away from its roots

Quaile said this is all part of the party’s long-time-coming shift away from the left and towards the centre. That shift was effectively solidified in 2013 when the NDP removed all references to socialism from their constitution, though some would argue it really began in 2003, when Jack Layton took over. Whatever the case, ultimately, Quaile said, the policy resolutions that have been left out of the latest handbook are those this current watered-down iteration of the federal NDP would consider too “radical."

But, Quaile said, that’s “ridiculous” because in reality these demands are simply “basic common sense” policies that are good for the environment, the earth and thus for humanity, given the pressing needs to shift to a sustainable green economy to address global warming seriously.

“We’re not taking particularly out-there or unsupported opinions,” she said. “We’re quite backed up by facts and data...and calling solutions to that ‘radical’ is really harmful.”

She pointed to the party’s push against movements for Palestinian rights, its resistance to the Leap Manifesto, and its support for the continuation of fossil fuel extraction, among others, as evidence that the party has shifted from its traditionally leftist principles.

If the party were to suddenly include all the missing resolutions in the 2018 handbook and were to then publicize it and apologize, it would certainly be a welcomed sign that the party is listening to its grassroots membership, said Quaile.

But “guarantees” about public “concrete procedures” and steps are needed to truly restore faith in the party.

Quaile said currently, while certain procedures like the candidate nomination process are theoretically supposed to be democratic, in practice they are “very opaque,” vertically decided and “not public to the membership.”

“If they are committed to being accountable to (their membership) and are committed to making these changes, then that means focusing on the spirit of that resolution, which is more democracy and accountability and transparency."

As of writing, the policy book remains on the website, but it is still missing the 16 resolutions.