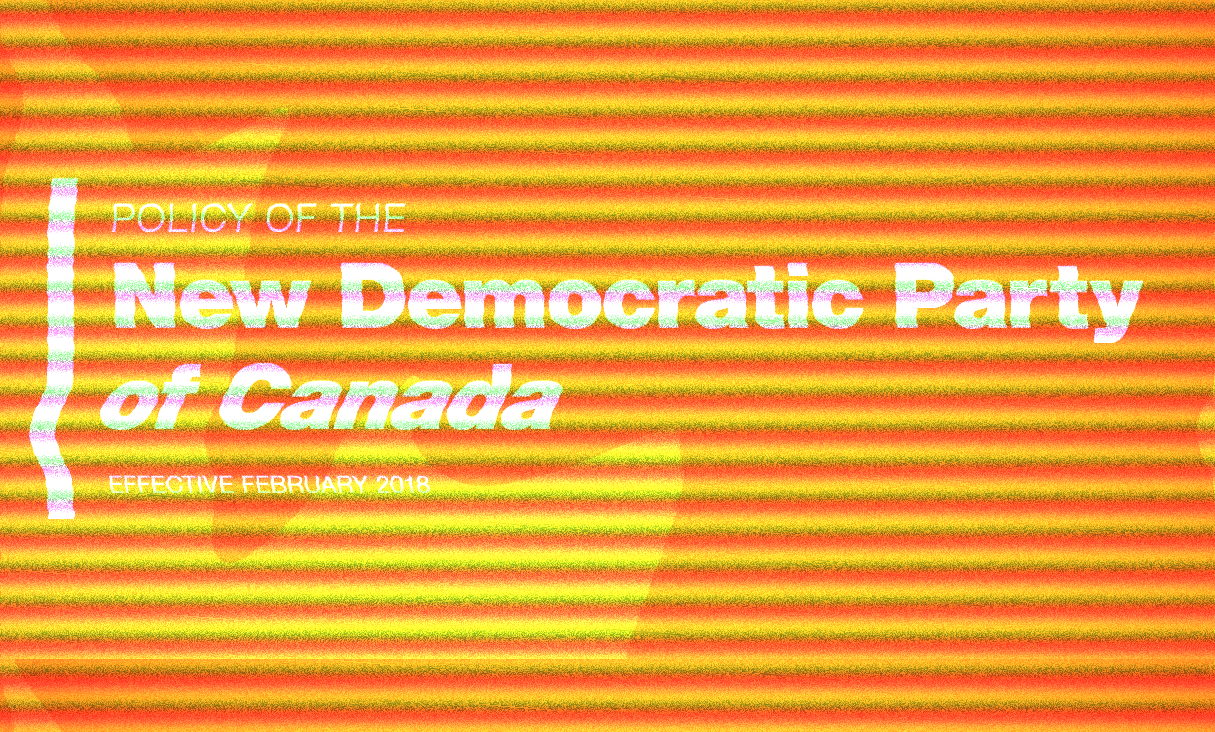 With less than three weeks to their 2021 virtual Convention, the Federal NDP has failed to meet the timelines outlined in a resolution passed at the last convention in 2018 to give party members ample time to review proposed policies before convention time.

The resolution to Modernize and Democratize the Convention Resolution Process (7-45-18) required the party to 1) “disseminate a proposal [for modernizing and democratizing the resolution prioritization process] at least 10 months prior to the next convention”; and 2) that “within four months of that convention, the National Director [must] operationalize an online mechanism for presentation, discussion and prioritization of policy resolutions.”

According to NDP president Mathieu Vick, “this is the first time ever that delegates will vote directly for resolution prioritization through an online portal without a central committee, and without (the) Federal Office having any say in the matter.”

“It’s a big leap forward,” he tells the Media Co-op by email.

But for Emily Quaile, a member of Courage Coalition, a grassroots group of members inside and out of the NDP trying to "bridge the divide between movement and electoral politics," according to their website, that “big leap forward” has not happened.

“The party has completely failed to live up to the timelines that the resolution detailed, despite having an entire extra calendar year to implement a democratic, modern, transparent, and accessible prioritization system,” she writes in an email to the Media Co-op.

“We have zero evidence that the new system will satisfy the requirements laid out by the 2018 resolution.”

A previous Media Co-op article published March 13th highlighted how 16 resolutions that had been passed at the 2018 convention had been excluded from the party’s current policy handbook. After party president Vick initially said he was unaware of the excluded policies and that he would look into it “because they should be included,” Vick sent another email standing by the exclusion.

“I don't have much to add to what you wrote from [NDP MP for Hamilton Centre] Matthew Green,” he says.

“Some resolutions are specifically worded: 'Be it resolved that the NDP policy book be amended to ...' and some are more action oriented: 'that the party promote...', the latter doesn't get into the policy book. There is no reason for not putting things that were passed at Convention in our policy book.”

In response, Quaile highlighted Courage’s stance on this directives vs policy distinction, noting that even long-time NDP members like Sid Ryan and Svend Robinson "have never heard of such a thing."

"If there is such a category called 'directives' and if the party is committed to upholding them, why is there no public record? Even if such a category existed...the party still refuses to explain why the decriminalizing drugs resolution is completely absent from the book when it cannot possibly be construed as a ‘directive,’ whatever that might be,” she writes.

On Feb 21, Robinson, who represented Burnaby as an MP from 1979 to 2004, Tweeted that in all the conventions he's attended "back to 1971," he has "never heard of this distinction between 'policies' and 'directives.'"

"When party members pass resolutions at Convention taking a stand on key issues, those should be included in any 'Policy Book'. That's democracy, transparency, respect for members who send resolutions to Convention and vote on them," he tweeted.

Likewise, Ryan, who's chaired "20 major conventions" over the last 30 years, also tweeted that he has "never honestly heard of a resolution that was duly debated and passed by the membership being referred to as a 'directive.'"

Vick takes issue with our previous article about the excluded policies, saying it gives “the impression that [the NDP] are not on board with these ideas” even though this “could not be further from the truth.”

“The reality is that these issues were all part of our election platform, which is a step further,” he writes, referring to the policies demanding universal dental care, the decriminalization of all drugs, paid sick leave and the end of street checks, among others. He also added that NDP Leader Jagmeet Singh has been “very vocal on all these issues.”

In response, Quaile reiterated Courage’s read of the situation, namely that the party higher-ups had arbitrarily “taken weaker positions on all those issues in the election platform than the original wording of the resolutions.”

“That is the opposite of ‘a step further’,” she says. “It is a betrayal of the party’s official position on these issues, as clearly and democratically determined by the NDP membership.”

Vick did not respond to requests for additional comment by press time.

As of March 24, the policybook has not been amended to include the 16 excluded policies.