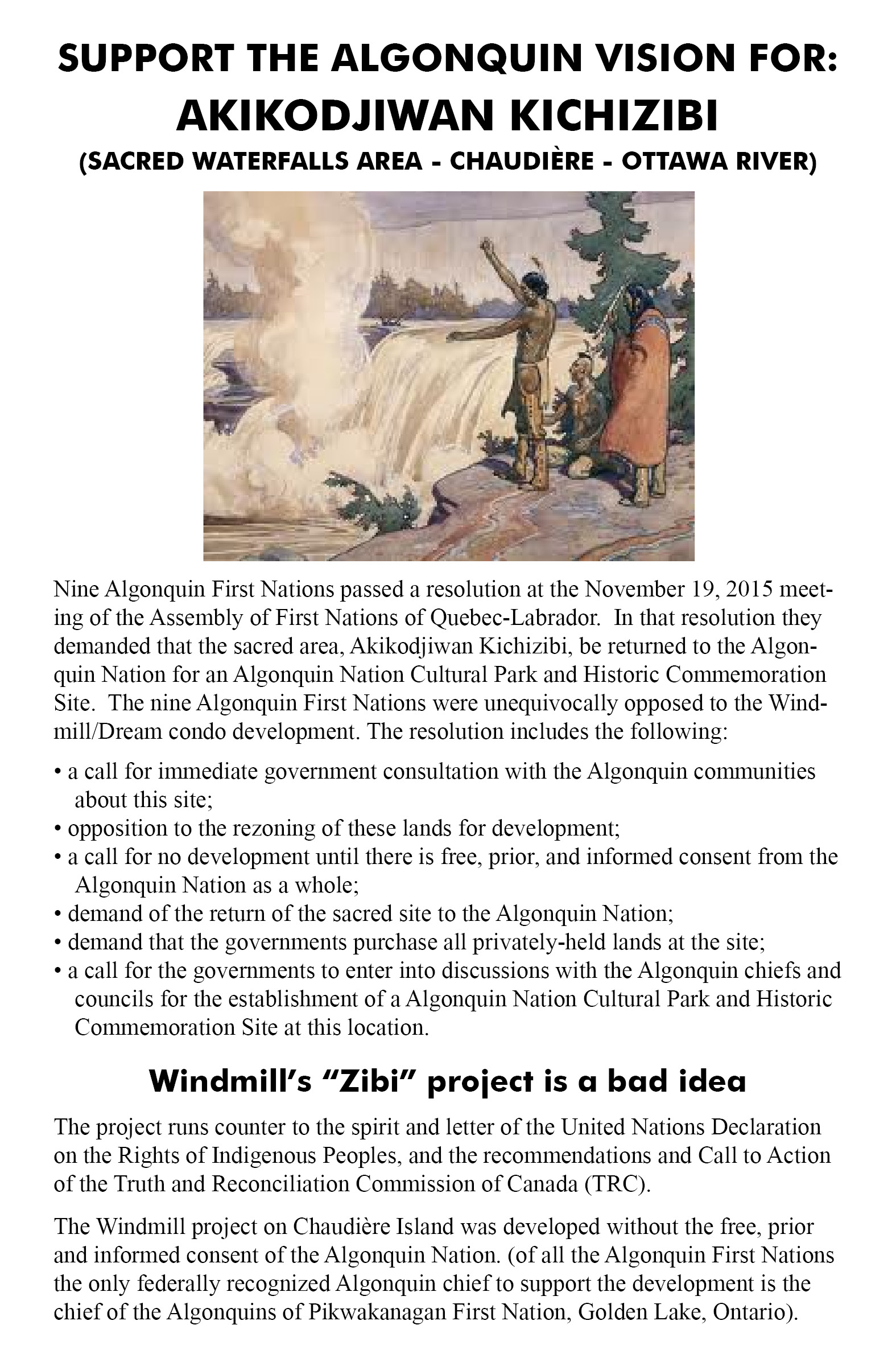 Correspondence in support of the Algonquin First Nations Call to Support Protection of Sacred Waterfalls Area - with Indigenous & Northern Affairs Minister Carolyn Bennett's office as well as INAC Ontario regional office employee, and further below with the National Capital Commission.

The Indigenous Affairs Minister's office will apparently be replying to the Algonquin chiefs in mid-to-late January, this will be the first acknowledgement / response from the federal government to communications initiated by these Algonquin chiefs earlier this summer, for an urgent matter where the developers have already broken ground on the site.

I am writing further to my original letter of Dec 15 (which you can find below) as well as subsequent phone calls with [INAC employee] at the Ontario regional office of Indigenous Affairs.

I thought it important to add some information that you may not otherwise be including in your considerations on this issue of the 'ChaudiÃ¨re Falls' sacred area in Ottawa/Gatineau that is slated for condo-commercial development by Windmill Development Ltd despite objections from nine Algonquin chiefs.

First, to address a statement from your department that was reported by APTN on Nov 26 2015: “With respect to the Windmill Development project on these privately owned lands at Chaudiere Falls: it is our hope that the parties involved – Windmill Development Group, the City of Ottawa, the Algonquins of Quebec and the Algonquins of Ontario – can work together to find a constructive, respectful and positive way forward"

It is important to note a few things. One is that part of the lands are officially owned by the federal government, held by the NCC. Two is that the City of Ottawa has ignored requests to consult with the Algonquin chiefs about this matter. Three is that given this is unceded Algonquin title land, it is up to the federal government to consult and ensure that Aboriginal title and rights are respected. Four is that although the federal and provincial governements are in a land claims process with the newly-created "Algonquins of Ontario" to cede these lands, to this point they have been ignoring the title and rights to these lands of the Algonquins not included in the "Algonquins of Ontario" organization.

Secondly, I wish to call your attention to the publicly-availalbe previous demands for consultation from the Kitigan Zibi Anishinabeg (Algonquin) to various levels and arms of governments - the NCC, the City of Ottawa, and Governments of Canada, Ontario and Quebec  - just to ensure you are aware of them. They follow below, relevant excerpts and links, with dividers in between.

As [INAC employee] mentioned to me, the Ontario regional office is currently working on a response which the minister's office is planning to finalize in the coming weeks.

I do hope this response will uphold the intentions and values of both the recommendations of the Truth and Reconciliation Commission, and the United Nations Declaration on the Rights of Indigenous Peoples.

The NCC says (Nov 12 2015) "we feel that the Federal Conduct will have little or no impact on potential Aboriginal title and rights. Please be advised that the NCC and PSP [Public Services and Procurement] are contemplating proceeding with the aforementioned* real estate transactions. Should a decision be reached to move forward, we anticipate closing the transactions during the spring of 2016."

* = "the proposed transfer of certain Crown land on ChaudiÃ¨re and Albert Islands (the "PSP Lands") from Her Majesty the Queen in Right of Canada to the NCC and subsequently from the NCC to the Windmill Development Group Ltd. ("Windmill"). ... In addition to the PSP Lands, land owned by the NCC, located along the Gatineau shoreline ... may also be transferred to Windmill."

Nov 20 2015 response from Kitigan Zibi Chief Jean-Guy Whiteduck, p2 of same link: "There are nine official Algonquin First Nation communities in Quebec and one in Ontario. All these communities must be consulted regarding the land in questions before any transfer is considered."

Note that the NCC seems to be saying that they are leaving it up to Windmill to do the consultations, when in fact it is the government's responsibility.

"I am asking that you table with the Ottawa City Council that the Chaudierre and Albert Islands like Victoria Island are lands that are considered as title lands by the Kitigan Zibi Algonquins. We have never ceded nor have we entered into treaty for these lands. I am therefore requesting that the the City of Ottawa elected Council immediately enter into a formal dialogue with the Kitigan Zibi Ansihinabeg leadership before making any decision related to zoning for the requested area. We believe that dialoguing with Kitigan Zibi is a required due diligence on the part of the city and would demonstrate the City's respect for our rights."

"Our  traditional  territory  has  always  been,  and  continues  to  be,  UNCEDED.  We  hereby  put Canada, Quebec and Ontario on notice that the status quo, in which our Aboriginal title lands are taken up by government and industry, is not acceptable.  We have watched billions of dollars of resources extracted from our territory with little to no benefit to our people. THIS MUST END.
We  intend  to  take  the  necessary  steps  to  resolve  our  outstanding  title  claim  over  our  traditional territory.  In  the  meantime,  until  our  Aboriginal  title  is  fully  recognized,  we  expect  the Governments  of  Canada,  Quebec  and  Ontario  to  engage  with  us  in  a  manner  that  reflects  the strength of our title."

ADDENDUM - Two recent media articles that are of relevance:

- I think this quote really speaks to what should be done:

“You hear this word quite a lot: Reconciliation. What does that really mean?” Peter Di Gangi, research and policy director at the Algonquin Nation Secretariat, told about 100 people at Southminster United Church.

“It’s easy for something to become a catchword, but when you really think what reconciliation means and what needs to be done at this time, the islands at Chaudiere Falls are an example of what could happen. Let’s stop, step back and think about what really needs to be done given the history of those islands and their meaning.”

"We now know, after more than a century of uncertainty, that there was once a large, complex and ancient indigenous burial ground there, at the very centre of what became Canada’s capital city.

We also know that this sacred site — so close to the thundering waterfall that punctuated the landscape for millennia before lumber mills and hydro dams obscured its magnificence — began receiving the remains of the dead some 5,000 years ago. That’s several lifetimes before the oldest and most renowned of the Great Pyramids of Egypt entombed the Pharaoh Khufu, circa 2,560 BC."

- After Boswell and archaeologist Jean Luc Pilon recently published this research in the Canadian Archaeology Journal, Boswell now writes there should be a National Historic Site established at "Hull's Landing" on the Gatineau shoreline. However, it should really be up to the First Nations what is to be done now that the research further backs up the traditional knowledge of the sacred site - and with the pending condo development, their prime and urgent current focus is on the return of the central part of this sacred site, the land directly at the waterfalls, to Algonquin stewardship. Please honour this in your role representing the entire country, and begin negotiations to set this right.

I am writing to support the demands of the Algonquins chiefs to protect their sacred site on the Ottawa River in downtown Ottawa/Gatineau.

I also urge you to stop ignoring their communications with your office, and instead begin discussions with them as per their request.

In October, four Algonquin First Nations call for the protection of the sacred site (Gatineau shoreline, and islands on the Ontario side of the border) in downtown National Capital Region on the Ottawa River.

It is currently planned for high-rise development by Windmill Development Group (they actually just broke ground this past week on the Quebec side).

In November, the AFNQL - including nine Algonquin chiefs - unanimously passed a resolution to protect the site. And then this month, the national AFN passed a similar resolution.

From what I understand, no levels of government have even acknowledged the receipt of the communications from the Algonquin chiefs on this matter, let alone started the discussions as requested.

It should be noted that the land in question is part of unceded Algonquin territory.

This lack of recognition is not acceptable, especially as the Truth and Reconciliation Commission wraps up its mandate and points to a better way forward.

Please take action on this matter, and being to negotiate with the Algonquin First Nations!

ALSO CORRESPONDENCE WITH THE NATIONAL CAPITAL COMMISSION
(after original message of Dec 15 2015 above):

Thank you for your email concerning the protection of the Algonquin Sacred Waterfalls Area.

We are pleased to confirm that the NCC will be conducting consultations once there is sufficient certainty regarding the negotiations for the federal lands. You will also be pleased to note that the regional First Nations leaders have been kept apprised of the NCC's role throughout the process.

Thank you for taking the time to write.

I am a bit concerned about your reply to my original letter regarding the Chaudiere Falls sacred site in Ottawa / Gatineau that is at risk of transfer to and development by a private corporation (Windmill Ltd).

I was able to find a copy of the NCC's Nov 12 letter to the Kitigan Zibi Algonquin chief in which it is stated the NCC is ready to proceed with the transfer of these "crown lands" to Windmill Development Group Ltd to be finalized in the spring.

(By 'these lands', I refer to portions of both Albert and Chaudiere Islands, as well as part of the Gatineau shoreline)

When you say that you will begin consultations once there is 'sufficient certainty regarding the negotiations for the federal lands' to what are you referring?

If you are referring to the Ontario land claim, the "Algonquins of Ontario" cannot negotiate away lands where the Aboriginal title is held by Kitigan Zibi, nor can the negotiations ignore the Aboriginal rights of the other Algonquin First Nations to the area.

When will the NCC or any other arm of the federal government begin to negotiate with these Algonquin chiefs?

Before or after transferring the crown land to a private corporation?

Obviously if it is after, then you are violating the constitution and the Indigenous rights of these communities, along with your new government's promises.

The Kitigan Zibi chief has indicated in his Nov 20 letter to the NCC that it is your duty to consult with all the Algonquin chiefs before doing anything with these sacred lands.

Note that it is not enough for, as you write, "the regional First Nations leaders [to] have been kept apprised of the NCC's role throughout the process" - notifying is not the same as consulting or having negotiations.

Please follow through on your government's promise to honour the TRC recommendations as well as the UNDRIP to usher in a new era of respect and reconciliation with the Indigenous first peoples of this land.