Glen Vowell band office lost the mortgage files, calls in RCMP to enforce eviction at start of winter during pandemic
by
Billie Pierre 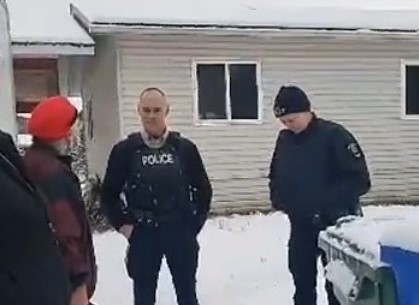 Footage of the RCMP evicting Robynn Muldoe was live-streamed by her aunt Lorinda Campbell, and has now gone viral and has been viewed over 9,000 times now. “As her aunt I can say this is crazy (that the) RCMP is here on the reserve without our safety considered and invited by the colonial band office admin,” Campbell tells the Media Co-op. “They have entered homes here without proper protections during this pandemic. Whose interests do they serve?”

Robynn Muldoe chose to occupy her late brother Mark Muldoe’s house two years ago. He had paid off 14 years of a 15 year mortgage on a rent to own house before his passing. After his wife chose to move away, taking the children with her, Robynn moved in and paid off the final year of the mortgage.

“I moved in because I wanted to keep this house for my late brother's children to inherit,” Muldoe tells the Media Co-op. “I wouldn’t sign a lease because the house was already under a mortgage. Now the band administration told me the file on the home doesn’t date back to when Mark Muldor was alive. Did they lose the file or burn it intentionally?"

"It’s been rough these past two years, and I always knew it would come down to this, but I can’t believe how bad we’ve been treated. I've had to take a leave of absence from my work for my Nation as a nurse due to my own health problems since June. I asked the band manager Velma Sutherland if I could focus on recuperating and to postpone dealing with this dispute until the spring and she agreed, but on Monday, when I tried to open my front door, the locks had already been changed.”

Asked how have things been since her locks were changed last Monday (November 16, 2020), Muldoe says, “My son is 10 years old and he’s afraid of the RCMP. There’s missing and murdered women along Highway 16 here, we’ve lost relatives, there's so many missing women and girls, and they’re not doing anything. Yet, the RCMP have continuously harassed me."

"On Monday night, while I was waiting outside my son’s hockey practice, 2 RCMP cars blocked me in by parking directly in front and behind me. All the parents and kids at my son’s hockey practice witnessed this. The RCMP said that they were just there to check up on me. Velma Sutherland the band manager told me that professional movers would be arriving at my place last Friday, but they came on Thursday. I asked them about the date change, and the movers stated that it had always been arranged that they move my things on Thursday. I was lucky to be able to grab one suitcase and some toiletries. How am I to find a place? I’m on a leave of absence from work, The COVID-19 pandemic is taking place right now, it’s really hard to find a place”

When asked for an interview, Glen Vowel band manager Velma Sutherland said she’s unable to, due to previous engagements.