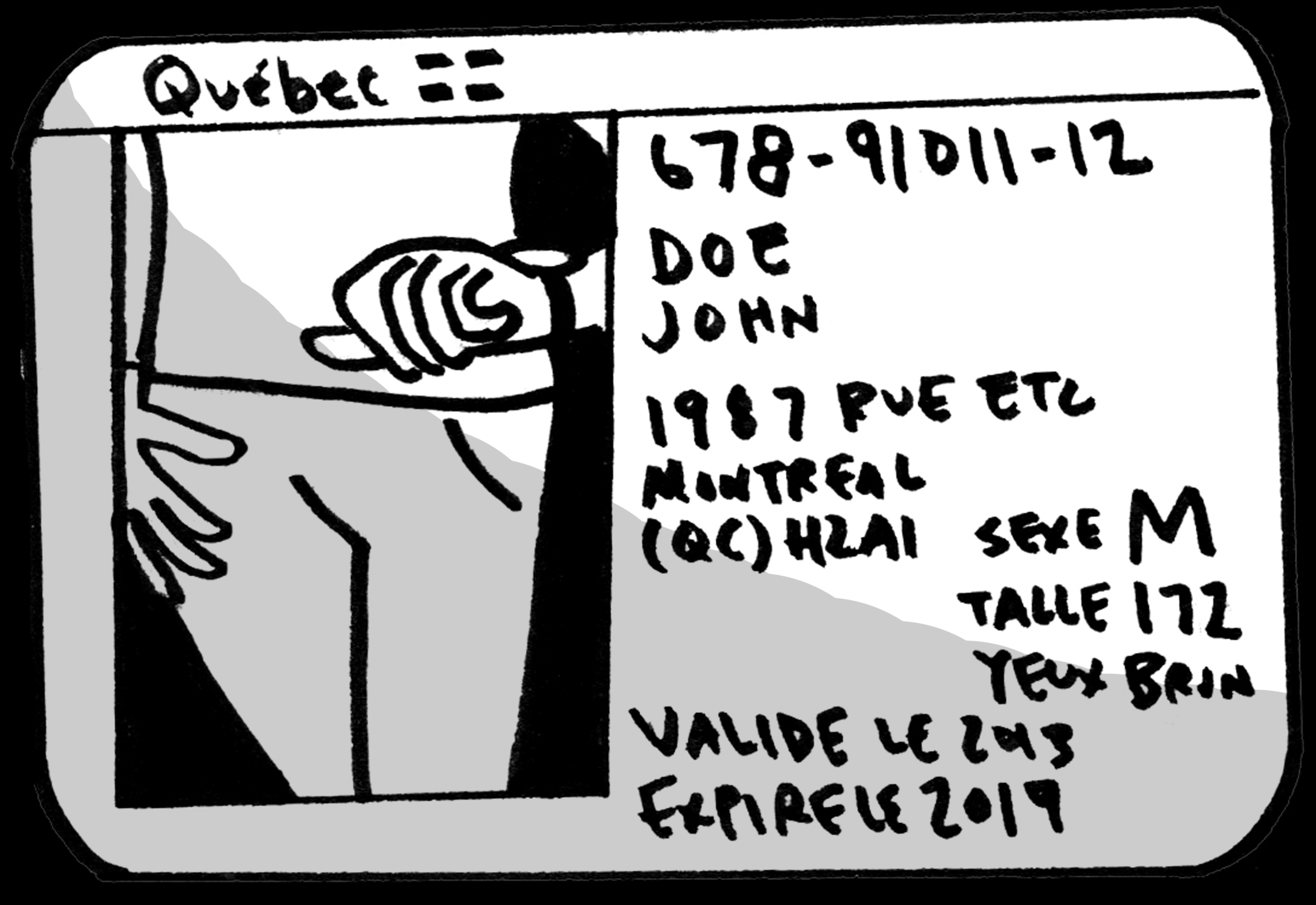 MONTREAL—Deena* emigrated from Jordan to Quebec in March 2010, hopeful about settling in a city where she could live safely as a transgender woman. Instead, she found herself caught in a multi-year long administrative nightmare.

Despite the fact that she met the requirements for changing her legal name and gender marker (the M or F that appear on official documents) to match her gender identity, she was prevented from doing so because she was a permanent resident and not a Canadian citizen. Quebec is the only province in Canada that requires citizenship in order to make these types of changes to one's legal documents.

This barrier was one of several up for debate in Quebec’s National Assembly last June as a result of the latest round of pressure from transgender activists, who have been fighting for decades to force important changes to the province’s Civil Code. Interventions made by members of the Conseil QuÃ©bÃ©cois LGBT’s Trans Committee were a response to Bill 35, which proposed minor changes on the topic of name and gender marker change, but which they felt fell drastically short of addressing the barriers trans people face.

“There’s no reason in the world the draft bill shouldn’t have already included amendments removing the surgical requirements for a change of sex designation, eliminating the citizenship requirement, and creating an avenue for minors to change their sex designations. The government has been told about these issues for a long time,” said Samuel Singer, lawyer and former coordinator at QuÃ©bec Trans Health Action (Action santÃ© travesti(e)s et transsexuell(e)s du QuÃ©bec, or ASTTeQ).

A report submitted by the Trans Committee to the Quebec Minister of Justice in May 2012 very clearly outlines these and other important issues for combatting transphobia and minimizing administrative bureaucracy in the province. Singer asserts that the same points have been brought to the attention of the province repeatedly for over a decade.

At ASTTeQ, Quebec’s only province-wide trans health organization, the citizenship requirement has been a particular concern. Acquiring citizenship in Canada is a lengthy and expensive process for anyone, and for many marginalized trans people it is never attainable. “When somebody has a criminal record, be it related to solicitation charges [for sex work], or shop-lifting, or self-defense in a situation where a person is being assaulted…the criminal record will prevent them from accessing citizenship, which will drag on the process of changing their legal documents, potentially for decades,” said Nora Butler Burke, current ASTTeQ coordinator.

Butler Burke told the story of one trans woman who has been living in Montreal without citizenship for 25 years because she can’t afford the cost of applying for a pardon from the federal government. “It’s meant that when she interacts with the police, when she interacts with a welfare agent, when she’s trying to go to school to get a diploma, she’s still using her legal birth-assigned name and gender,” she explains. Being outed as trans because of a discrepancy between legal documents and gender identity can result in negative experiences ranging from dirty looks, to denial of health and social services, to outright violence.

Gabrielle Bouchard, core staff member at the student-funded Centre for Gender Advocacy in Montreal, agrees. “Trans people without the right ID face discrimination in every single portion of their life. If you can’t find a job and you can’t have stable housing…marginalization just adds up, it doesn’t stop there. Those two are foundational to make sure that you will stay marginalized,” she told The Dominion.

Barriers to job and housing access are directly linked to transphobia that individuals without proper ID face in schools. Betty* is a transgender refugee from Latin America and an outreach worker with ASTTeQ. Like many immigrants who come to Quebec, Betty enrolled in French language classes when she arrived. She found that the already alienating experience of learning a new language was compounded by a lack of respect for her gender identity on the part of teachers and classmates. “It’s hard, and sometimes it’s painful. Because you don’t feel like people are respecting you and they are not giving you your place,” Betty said. While some individual instructors agreed to use Betty’s chosen name and pronoun, she said many insisted on using the name and pronoun that appeared on the official school records.

Deena’s experience was similar. When she pursued a CEGEP program to become a daycare worker, her school refused to assist her in finding an internship where she would not have to disclose her legal name and gender. She was told by the school’s director that “the parents of the kids have a right to know your ‘real’ identity in order to protect their kids.” After several unsuccessful attempts to advocate for herself, Deena left the program. Despite having worked as an engineer in Jordan, the barriers Deena faced in changing her legal documents prevented her from finding steady work in Montreal.

In addition to the citizenship issue, the Trans Committee reiterated to the National Assembly their demand to eliminate requirements for gender reassignment surgery (GRS). The Quebec Civil Code states that a person must have “successfully undergone medical treatments and surgical operations involving a structural modification of the sexual organs intended to change his secondary sexual characteristics” in order to change the gender marker on official documents. This stipulation has posed a number of serious issues for trans people in Quebec for decades, both because the Director of Civil Status has not maintained a consistent position on exactly which surgeries it requires, and because many feel it’s a violation of their human rights to demand they undergo surgery in the first place.

Similar requirements have recently been overturned as a result of legal battles in Ontario as well as in Argentina, where, in 2012, a bill was passed making it possible for transgender people to change the gender marker on official documents without undergoing any kind of medical transition. If the proposed amendments to Bill 35 in Quebec were to pass, it would represent the first such change at the legislative level that was not the result of a court ruling.

There are many reasons someone wouldn’t want or be able to undergo GRS, according to Billy HÃ©bert, manager of a community-based research and intervention project on the experience of aging trans people in Quebec health care and social services. “I’m thinking of a particular woman who was quite sick and couldn’t access [GRS] and had papers that were non-concordant with her identification and her appearance, and who faced a lot of discrimination trying to access healthcare…in her case, treatment for cancer,” HÃ©bert told The Dominion. His research shows that, by and large, accessing document changes becomes increasingly difficult for trans people as they age.

For Butler Burke, the elimination of the surgery requirement from the Civil Code comes down to an issue of bodily self-determination. “Legal documents are a way of regulating our movement and regulating our bodies, especially certain people’s movement and freedom. The more that we’re able to eliminate barriers to people’s freedom of movement and ability to live and survive, the better people’s quality of life will be,” she said.

While GRS has been covered by Quebec’s public health care system since 2009, there are many costly bureaucratic steps required to qualify for these surgeries, making it inaccessible for a lot of trans people in the province.

The third issue the Trans Committee pushed for at the National Assembly was the minimum age requirement. As it stands, individuals under eighteen cannot change their legal name or gender marker, with or without parental permission. “[The Director of Civil Status] is asking trans kids and trans youth, who are in one of the most vulnerable periods of their lives…to go through high school with this huge dichotomy between their lived gender identity and their legal one,” said Bouchard. Preventing them from changing their documents, she said, is essentially legitimizing the discrimination they face from teachers, classmates and school principals— discrimination she said leads to trans youth being one of the highest-risk populations for considering suicide.

An Ontario study undergone by the Trans PULSE Project showed that in 2010, almost 75 per cent of the trans people they surveyed had considered suicide in the past year, and that trans youth were twice as likely to seriously consider it than those over the age of 25.

After all the interventions made by trans advocacy groups at the National Assembly, none of the proposed changes to Quebec’s Civil Code were put to vote. Whether the minority ruling Parti QuÃ©bÃ©cois would have supported the amended bill is unknown. What is clear, however, is that it did not have the support of the Quebec Liberal Party, who, after several days of presentations and questions, insisted a broader social debate was needed prior to considering any part of the bill. If the bill gets revisited at all, it won’t be until the National Assembly reconvenes after the summer.

Trans activists aren’t holding their breath but instead are pursuing other avenues to achieve the results they want. The Centre for Gender Advocacy is spearheading an online funding drive to pay for the costs of a Quebec Human Rights Commission complaint as well as a lawsuit.

In addition to legal channels, HÃ©bert said there is a huge need for broader public mobilization: “That’s where important alliances can be made to make sure no one gets forgotten, particularly surrounding questions of citizenship.”

In the meantime, individuals like Deena often pursue extreme measures to change their documents. After years of being given the run-around by provincial and federal government officials and struggling with transphobia in her day-to-day life, Deena eventually flew across the country to Vancouver to have her name changed. Claiming she’d lived there for three months, the process took only half a day. “I tell people here in Quebec: I spent two years trying to change my name and I had it changed in two hours in BC.”

*Some names and other identifying details have been changed to maintain the confidentiality of interviewees.

Ashley Fortier is a Montreal-based writer and editor (ashleyfortier.com | @smashmtl).