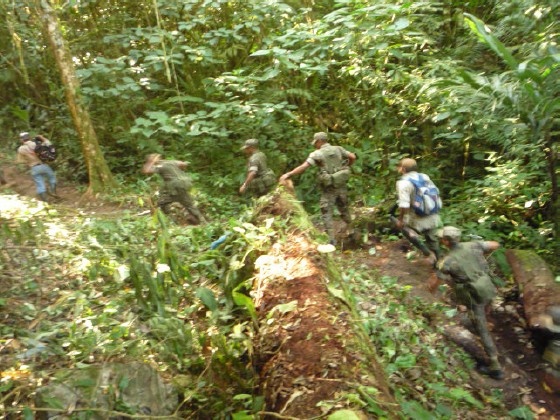 Since martial law was declared in Alta Verapaz, supposedly in order to fight drug trafficking, no real results have been shown. The results are more distracting than anything else, used to prop up the current government. Since it is lawless, this round of martial law began with an abuse of power and has begun to turn towards repressing Indigenous communities and to demonstrate its discriminatory and racist nature.

Below is the testimony of members of the Se’ Job’ Che’ community.

Se’ Job’ Che’ is a Maya Q’eqchi’ community of 17 families in the municipality of CobÃ¡n, Alta Verapaz. On Monday, January 10, 2011 at 10:00 am, 40 soldiers, 2 members of the National Civilian Police, and 20 park rangers [INAB guardarecursos] entered the area where the community tends their cardamom, corn, and bean crops. Without engaging in any dialogue, the military troops began shooting their weapons, and the campesinos had to run and hide away from the crop area. The military then began to destroy the community’s crops, cutting 300 cuerdas of cardamom [around 15 hectares], 300 cuerdas of beans, and 50 cuerdas of corn.

HÃ©ctor Arnulfo Ruiz, who was present as a representative of the FONTIERRAS government land institution, assaulted and attempted to rape Mrs. Adelina Yaxcal as she was hiding among the cardamom crops, ripping her traditional gÃ¼ipil blouse in the process. FermÃ­n Ayala, head of the National Forestry Institute (INAB) park rangers, attempted to bribe various community members, offering to spare their crops in exchange for Q50,000 [over $6,000].

The families were able to reunite in the afternoon, and then realized that during the raid they had lost 20 turkeys and 20 chickens, as well as other personal property such as work tools. By 5:00 pm that day rumors were circulating that the same actions were to be carried out in other Indigenous communities.

The National Indigenous and Campesino Coordinator (CONIC) calls for the intervention of the national human rights PDH institution, organizations that work for Indigenous rights, and international groups, to use political action and legal tools in response to these actions. This raid SHOULD NOT BE CARRIED OUT WITH IMPUNITY, considering the destruction of community crops, attempted rape, and the theft of the few belongings that the community had.

Members of the Se’ Job’ Che’ community have not invaded or occupied a protected area, as is claimed in justification of these actions. The community holds legal documents beginning in 1965, when the governmental agrarian institution INTA initiated the process of providing legal title for their land. FONTIERRAS and the Secretariate of Agrarian Affairs (SAA) are also familiar with the community’s historical use of this area. There has been no interest in resolving this problem on the part of state authorities. We cannot allow that the Guatemalan state continue its policies of exterminating Indigenous peoples.