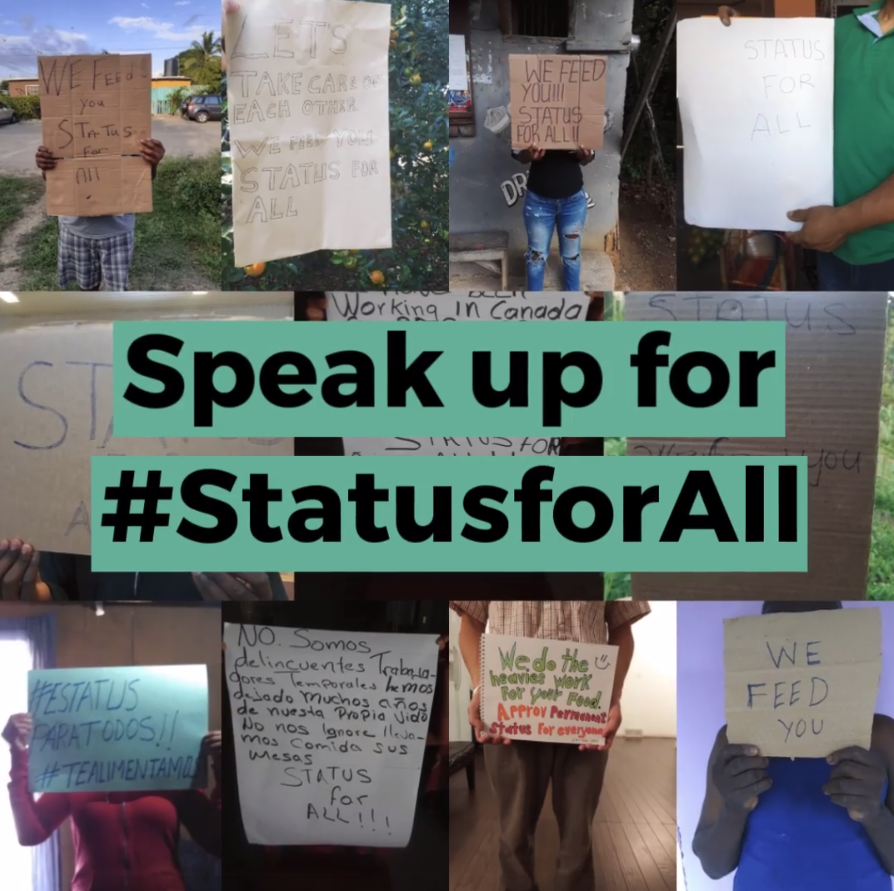 The letter comes just weeks after the government invited more than 27,000 people to apply for permanent residency under its Express Entry system, though it was only those under the Canadian Experience Class (CEC) that were chosen. This was possible because the usual high-score threshold average of 400+ points was reduced to a whopping 67 in light of the pandemic.

But while the move is good news for those applicants, advocates say, it excluded migrants in low-waged work, which includes many of the sectors that have been deemed essential during the pandemic. This means that farm workers, care workers, those in food processing, retail, delivery, warehouse work, cleaning, construction and more have been left to dry.

“Migrants, refugees and undocumented people have lost work and wages during the crisis but many have been shut out of emergency income supports,” reads the letter. “We call for a single-tier immigration system, where everyone in the country has the same rights... This work is necessary not just during a public health crisis, but to transition our economies away from the impending climate catastrophe.”

The pandemic has uncovered many of the systemic problems advocates have been shouting about for years, such as the fact that most of those stuck in low-wage work are groups already historically marginalized: women and racialized workers. With the added stress of being undocumented or lacking the certainty and protections permanent residents enjoy, and "because of a well-founded fear of reprisals, termination, eviction and deportation,” these workers often refuse to speak out against injustices and exploitation from employers, the letter states. And still, "federal immigration rules tip the scales against them.”

The Express Entry system, for instance, was introduced in 2015 as a way to fast-track permanent residency applications under three federal economic immigration programs based on exceptional scores on the Comprehensive Ranking System (CRS) criteria. While the CRS has been in place since the 1960s, the Express Entry system has effectively created a multiple-tiered system whereby those deemed high-skilled are given preference when the government needs to fill a quota of immigrants to allow in. Migrants are thus pitted against themselves in a Kafkaesque battle for the coveted Invitation to Apply (ITA) from Immigration, Refugees and Citizenship Canada (IRCC).

According to Moving2Canada.com, a “one-stop-shop information hub and support network for newcomers to Canada,” as per its website, “(t)hese draws occur regularly, approximately once every two weeks.”

Kit Andres, an organizer with the MRN and Migrant Workers Alliance for Change, said their campaign is therefore also drawing attention to this “divide and conquer” strategy intended to separate so-called high- from low-skilled workers. Despite being hailed as heroes and essential, they’ve been denied “the essential rights that they need to survive,” Andres explained. This is a desperate attempt to “divide the working class” based on otherwise arbitrary differences such as “immigration status, race, experience and education level.”

“So, farm workers are saying, we don’t want just status for us, we want it for everybody, no matter what work you do, how long you’ve been coming to Canada, what language you speak, or what your education level is,” they said.

One out of 23 people - or 1.6 million - currently do not have permanent status in Canada.

“That’s a lot of people who don’t have the same rights as everyone else,” Andres added.

The letter was also strategically released on the fifth Canada Agriculture Day to call attention to the fact that much of the food Canadians enjoy is planted, cultivated, harvested, cleaned and delivered by migrant workers. In 2019, 58,800 people came to Canada through two foreign worker programs – the Seasonal Agricultural Worker Program and the Temporary Foreign Worker Program’s agricultural stream, according to the National Observer.  Because of COVID, that number decreased by about 17 percent in 2020. But for those that did make it in, the same previous exploitative system awaited them.

For instance, said Andres, even though they don’t receive the same care due to their temporary status, temporary migrant farm workers still pay into the Employment Insurance (EI) and Canadian Pension Plan (CPP) out of their cheques. If they wanted to apply for EI, they would need a social insurance number, which is always attached to their work permit, which means once that permit expires, “they’re not able to access health care and other social services” like the rest of Canadians.

The national day was created by the big agri-food industry with funding from the federal government to ostensibly celebrate “food...and the people who produce it,” according to the website made for the day. But Andres said in reality it merely creates a “polished marketing image” of Canada’s food industry while leaving out the migrant workers responsible for the heavy-lifting but denied permanent status.

“So, farm workers use this day to...show that their power is growing and that they refuse to stay silent as they’re organizing together other migrants...refugees and undocumented people to win immigration status for all,” Andres said.

In a video circulated by the Migrant Workers’ Alliance for Change under the hashtags #CdnAgDay, #MigrantsFeedUs and #StatusforAll, more than 200 migrant workers came together to ask Canadians for their solidarity.

“We feed you!” read the captions on the video. “Speak up for #StatusForAll.”

John Jamieson, the president of the Canadian Centre for Food Integrity, a national membership-based non-profit charitable organization whose mandate is to try to educate consumers about where their food comes from, agreed it would be “wise" for the government to grant migrant workers permanent status.

“There's a certain level of skill to growing food, and one of the things that farmers have said for years is they rely on (migrant workers) because they know what to do when they get here,” he told the Media Co-op. “The people that are coming here are actually quite skilled, (so) maybe we need to move what the consideration of skilled labour is in relation to food production.”

While he insisted #CndAgDay is supposed to “make people feel good that we have a robust food system,” he conceded that “there’s a lot of people who are food insecure in Canada.”

“A lot of it is poverty,” he said. “A lot is (lack) of access….I don’t think it’s an easy thing to fix. It will take a concerted effort.”

According to Statistics Canada, in May 2020, “ (a)pproximately one in seven Canadians (14.6%) were estimated to live in a food-insecure household.”

Andres agreed that it must be a concerted effort to address and eradicate poverty, but they went further by demanding government action to address various other systemic social determinants that create and exacerbate food insecurity such as affordable housing, free public transit and  affordable food in order to “raise the floor” for everybody.

“When migrant, refugees and undocumented communities members are prioritized and cared for, every single person in that community benefits,” they said. “So, it’s about a reimagining of our economies and communities to centre care for every single community member.”

They also noted the dire impact the lack of immigration status has on both migrants themselves and the communities in which they live and work.

“Once you tug on one thread, you see how connected it is to everything else,” they said. “People need to look to their own communities and see who their neighbours are and what the needs are in their neighbourhoods and start there...and I guarantee it will tie into some of these largest issues like permanent status for all.”