#IdleNoMore Day of Action in Sudbury

#IdleNoMore Day of Action in Sudbury 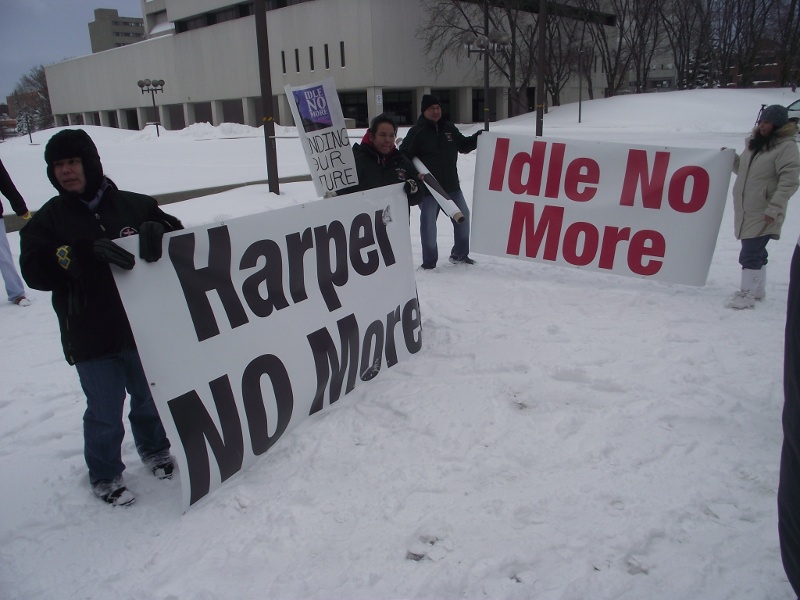 Despite weather bad enough for local school buses to be cancelled, around 250 indigenous people and supporters gathered in downtown Sudbury, Ontario, to mark the December 21 #IdleNoMore day of action.

Participants from the city itself and from many surrounding reserve communities gathered at Sudbury's city hall and shared music, dancing, and a few short speeches. When the action took to the streets, the drumming and dancing continued, and at several points the march stopped to round dance in key downtown intersections. During one of these stoppages, Patrick Madahbee, the Grand Council Chief of the Aninshinabek Nation, joyfully announced through a megaphone, "It's our land! We're dancing on our land!"

With an energy both celebratory and determined, the march made its way back to city hall for more speeches, more music, and an honour song for Chief Theresa Spence of Attawapiskat First Nation. Spence, currently in Ottawa, is in her eleventh day of a hunger strike to demand a meeting between the Canadian government, the Crown, and First Nations leaders in order to renew nation-to-nation treaty relationships.

The indigenous-lead #IdleNoMore movement, which was sparked by opposition to a number of pieces of federal legislation and energized by Spence's action, has rapidly grown into an effort to revitalize struggles against colonialism more broadly. The day of action on December 21 saw events across Canada and around the world.

Local event organizer Bruce McComber said that his hope for the event was "to try to raise awareness about Bill C-45," an omnibus bill that makes changes to a number of pieces of legislation related to indigenous people that the federal government is implementing without First Nations input or approval. McComber hopes more broadly that the many actions under the #IdleNoMore banner get Canadians to "look at what implementing the treaties would really mean." Along with being a path towards justice for First Nations people, doing so "would protect the waters ... and safeguard the resources that we all need" and therefore be of value to all Canadians, he said.

Through much of the march, Chief Madahbee and his Deputy Grand Council Chief Glen Hare carried a wampum belt that Hare said represents the nation-to-nation basis of "the commonwealth of the First Nations and the government of Canada." Hare added, addressing the federal government, "This is our Canada, not yours."

Chief Isadore Day of Serpent River First Nation echoed these sentiments when he listed colonial laws from the Papal bull of 1493 that supposedly allocated European jurisdiction in the Americas, to the English Crown's Royal Proclamation of 1763, to Bill C-45 today, and described them as "all illegal." He continued, "We're a sovereign people."

Isabelle Visitor of Sudbury, a participant in the action, blamed the mass media for the lack of knowledge among many mainstream Canadians about these issues. She said, "The media, it is owned by the corporations and the governments, and they keep everyone idle." For her, a central role for this new upsurge in activity is that "we must let the people know what the truth is."

The event closed with a promise of much more to come, but also an invitation to grassroots people to take the lead in planning actions. Chief Madahbee said, "Show us the way. You are the leaders. We are all leaders here. ... If anyone wants to organize anything, let each other know."

Scott Neigh is a writer and an activist based in Sudbury, Ontario. He recently published two books looking at Canadian history through the stories of activists, which you can learn about here and buy here. He blogs regularly on social and political topics.