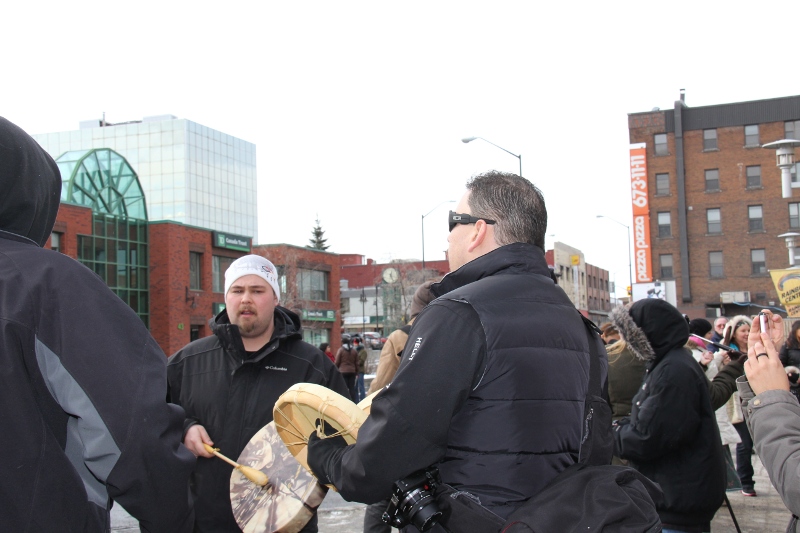 Bruce McComber is fed up that the contribution of First Nations locally is too often forgotten.

The 27 year old, originally from Wikwemikong on Manitoulin Island, was one of the organizers of the Wednesday Jan. 16 Idle No More peaceful protest outside the Rainbow Centre.

“The accomplishments and achievements of First Nations to this country are far too overlooked,” he complained. “For example, I heard an advertisement about Sudbury’s 100th anniversary,” he said. “All the major radio stations in the city played the message over and over -they said that Sudbury was built on the backs of hardworking people mentioning five or six ethnicities-English, French, Ukrainian - they did not mention Native people,” he said. “I was really upset at that,” he remarked.

“I know that the Sudbury area was inhabited by Native people at the time when it was illegal for Native people to work for the mines or even to hire a lawyer (to contest the hiring discrimination)-those types of injustices are often overlooked.” McComber said though past injustices could not be easily remedied today, it is crucial that Native nations no longer be excluded from the the profits that resource extraction corporations have taken from Native land.

The protest outside the Rainbow Centre was only one of many Idle No More protests across northern Ontario and across the country. CBC Radio One reported at 4 pm actions on the Ambassador Bridge in Windsor, the blocking of a highway outside of Edmonton, and protests in New Brunswick amongst other sites. CBC Radio One Sudbury at 4:30 pm reported protests in the Soo at the international bridge along with Idle No More road actions at the Serpent River reserve and also east of Sudbury on Highway 17 by the Nipissing First Nation.

“Idle No More is here today (in Sudbury) to show solidarity with the chiefs for a national day of action,” McComber said. “Although we are not disrupting we are educating,” he affirmed.

He noted Idle No More began to protest provisions in several federal bills that affected not only the rights of indigenous people but also the environment.

“Of course for Native people a core of our cultural teachings is that we live in harmony with the Earth and that the Earth is sacred,” he said. “The removal of environmental oversight that is coming from the omnibus Bill C-45 is such a great threat to the Earth that it has been a major rallying point for the Native people but also a major point of solidarity for Canadians,” he said.

“This is the day to show (Prime Minister) Harper what we are made of and that we will be idle no more,” Andrea Gustafson, another local Idle No More organizer, said. She added the omnibus bill would “put all of lakes and rivers at risk because they are not protected anymore.” The federal government has claimed that waterways are still protected by provincial legislation and their departments. Critics, including many scientists, have pointed out that the Harper government has laid off many fisheries biologists and undermined the ability of the scientific community to adequately monitor water quality across the country including closing an international aquatics centre in south eastern Manitoba with decades of research experience.

Though the number of protestors in downtown Sudbury was in the dozens, on the day Idle No More protesters marched through the city core to the Bridge Of Nations, McComber estimated anywhere from 150 to 200 protesters participated.

“The people were coming from all over -- Manitoulin, the North Shore, and here in the city of Sudbury which has a really high density of Native people,” he said.

McComber said helping organize the Idle No More protests was so inspiring for him that he felt prompted to return to school in the fall to perhaps take up legal studies. “ÃŒ want to help my people,” he beamed. He said he would even consider writing stories for the Grassroots: Sudbury's Media Collective site to help in the public education process for the wider community.

To learn more about writing for Grassroots: Sudbury's Media Collective, the Sudbury working group of The Media Co-op, or to let us know about upcoming events and issues of concern in the community, send an email to grassrootssudburymedia@gmail.com.