Kinder Morgan has until March 26 to clear the area they want to use, before annual migratory birds make use of the space. Then No Logging until August!
by
Billie Pierre
This post has not been approved by Media Co-op editors! 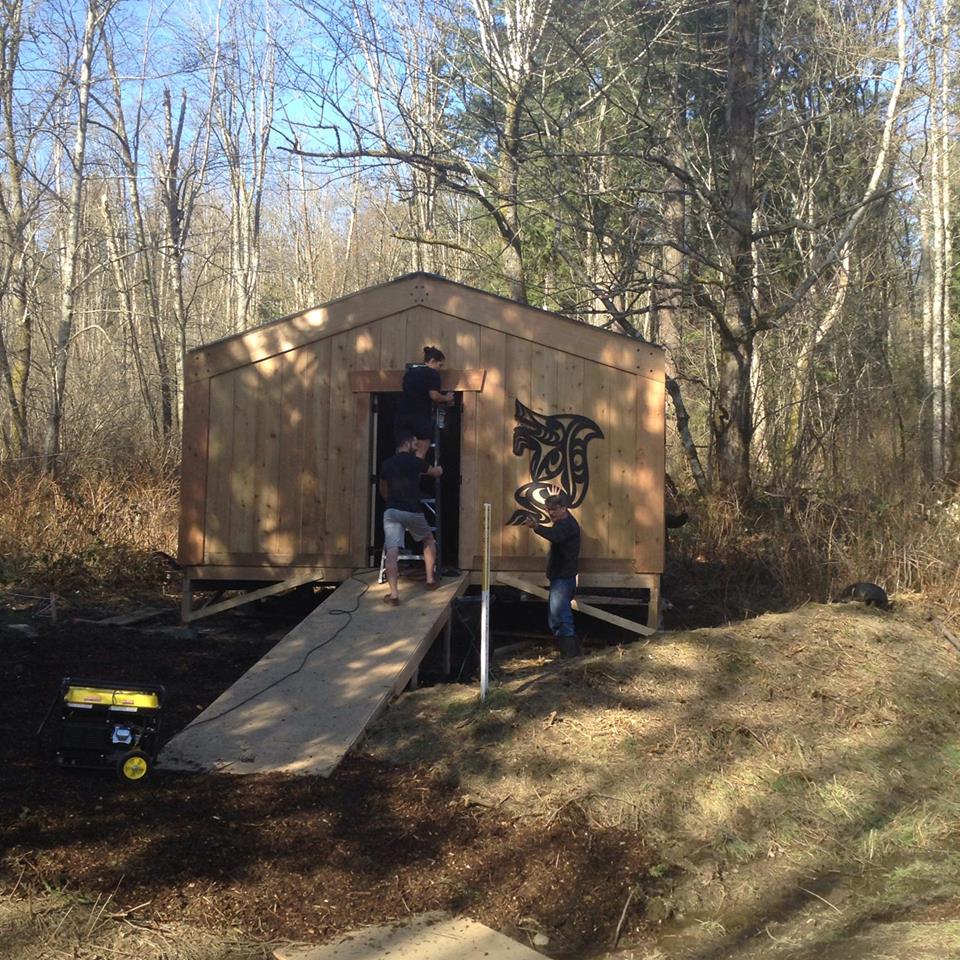 Today is International Anti-Police Brutality Day. It is also Day Two of the Injunction hearing at the BC Supreme Court in “Vancouver BC”, unceded Coast Salish Territories, against 15 defendants that Kinder Morgan wanted banned from within 50 metres of the Westridge Terminal Site, and the Kinder Morgan Tank Farm. Kinder Morgan included the names Jane Doe and John Doe, which could've make it possible to arrest anyone else who protests in the future. While court was taking place in Vancouver, the Burnaby RCMP were filmed close to the entrance of the Tank Farm. Ultimately, the injunction was granted, but at a much narrower to a 5 metre boundry. The Kwekwecnewtxw, the traditional watchtower built by the Tsleil Wututh people is within the 5 metre scope, and Camp Cloud is outside the 5 metre scope.

Currently, the energy giant is very limited in the work that they can do on the pipeline expansion. The Texas-based company is attempting to twin the Trans Mountain pipeline which would triple the capacity to 890,000 barrels of crude oil per day from Edmonton, AB, to the Westridge terminal in Burnaby, BC, and to Washington State. Kinder Morgan was given the go-ahead by the National Energy Board on February 15 to expand the Westridge Terminal, the Tank Farm, and to build a pipeline through Burnaby Mountain to join them. Currently, the corporation is attempting to cut down thousands of trees around Westridge Terminal in order to start a tunnel-drilling operation to cut a tunnel through Burnaby Mountain.

On March 5, three large tree-cutting trucks arrived at Westridge Terminal. Kinder Morgan said it needs between four to six weeks to clear trees and grade the Westridge site, and that work needs to take place before migratory bird restrictions come into effect on March 26. If crews don’t meet that window, clearing the site would be delayed until August, according to Kinder Morgan. Other work at the Westridge site includes installing a retaining wall.

Last Friday, a B.C. Supreme Court judge granted Kinder Morgan a temporary interim injunction against 15 activists. The company can now use the RCMP to forcibly remove and arrest these people if they are found within 50 metres of "Kinder Morgan property".

People at Camp Cloud KM Surveillance, which has been located outside of the Kinder Morgan Tank Farm in Burnaby BC since last November, live-streamed a video a few hours ago voicing concerns after hearing that the Burnaby RCMP were gathering nearby, and voicing that Camp Cloud, and possibly the Kwekwecnewtxw, could be at risk for a raid once the BC Supreme Court decides whether to grant Kinder Morgan the injunction.

The Kwekwecnewtxw is the traditional watchtower built by the Tsleil Wututh outside the Tank Farm during last Saturday's mass protest. It overlooks the tanker traffic in the Burrard Inlet.

All 15 defendants agree on these three points:

A judicial review to stop the Kinder Morgan pipeline expansion was filed  by the Tsleil-Waututh (North Vancouver), Sto:lo (upper Fraser Valley), Coldwater and Upper Nicola bands (Merritt) and the Stk’emlupsemc Te Secwepemc (Kamloops). Also included were the cities of Burnaby and Vancouver and the Raincoast Conservation Foundation and Living Oceans Society.

The review was heard in October 2017, and throughout the province the project is at a standstill until the federal government makes a decision - except in Burnaby. Kinder Morgan got approval to begin expanding the Westridge Marine Terminal and tank farm on Burnaby Mountain.

The National Energy Board allowed Kinder Morgan to bypass local laws and  permits after the company argued that it's a federal project. The City of Burnaby is appealing that decision. The B.C. government is also working to restrict any increase of diluted bitumen passing through the province while it studies spill impacts. In February, the NEB granted Kinder Morgan permission to build a pipeline tunnel through Burnaby Mountain to connect its tank farm to its tanker terminal on Burrard Inlet.

There have been nine arrests since Camp Cloud was set up. Notably, last Thursday, March 8 -- International Women’s Day -- three women chained themselves to trees, slowing down work for hours. The RCMP officers who arrested them were all men. They sexually assaulted one woman, making her strip off her layers of clothes, then gave her a t-shirt, an experience she said felt degrading and disrespectful. She told them: “You're lucky I let you arrest me, because you're criminalizing people who are defending the water you drink.”