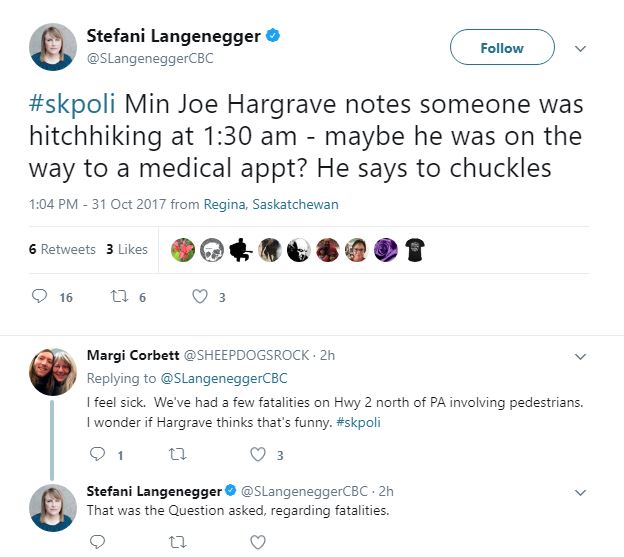 Joe Hargrave, the cabinet minister formerly responsible for STC, said he saw a hitchiker on the highway at 1:30 AM, and speculated that perhaps he was on his way to a medical appointment. This comment brought laughs from the benches on the government side of the house despite being a very real situation for many people in the province, especially those living in rural areas and on First Nations.

The 'joke' was made while answering a question about the Saskatchewan Government's dismantling of the Saskatchewan Transport Company, the crown corporation that provided bus service to rural communities in Saskatchewan until May of this year. But given the circumstances many people have been in as a result of STC no longer being available, the 'joke' is far too real for many people.  Medical appointments, parental visitations, funerals, etc., have all become much harder for people who used to depend on the service.

Stefani Langenegger, a CBC reporter, tweeted the disturbing response from the press gallery during Question Period in Saskatchewan's Legislative Assembly at 1:04 PM October 31, 2017.

The joke, the context, the fact that it got laughs, the fact that Langenegger's tweet is the only media coverage so far on the comment, all open a window to the worldview of Saskatchewan's ruling party.

#skpoli Min Joe Hargrave notes someone was hitchhiking at 1:30 am - maybe he was on the way to a medical appt? He says to chuckles