The meaning of the word â€œslutâ€

The meaning of the word â€œslutâ€ 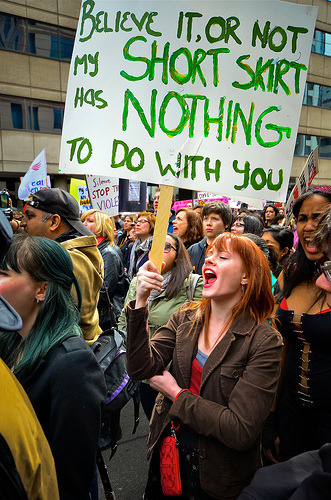 Slut or slattern is a pejorative term applied to an individual who is considered to have loose sexual morals or who is sexually promiscuous. The term is generally applied to women and is an insult or offensive term of disparagement, meaning “dirty of slovenly.”

“The word slut is often used to demean or control women and their dress and, eventually, their behavior,” says Evette Awalt. On Saturday, she will be leading a group of self-proclaimed sluts through the streets of Halifax. The Halifax SlutWalk follows in a long line of cities across the globe that have organized such protest marches.

Originating in Toronto in April of this year, SlutWalks are intended to re-appropriate the word “slut”: a term that has historically carried an overwhelmingly negative connotation. Many participants view these marches as a way of taking back control their sexuality and what defines it. Marchers dress as they please, and some literally bear the label “slut.”

SlutWalks in the past have been less than shocking. Halifax’s Sept. 17 version will be equally tame. But controversy surrounding the use of the term “slut” in its name has overshadowed SlutWalk’s original premise. “I felt very strongly about the message from the Toronto SlutWalk being about consent and that a person’s attire or activity is not provocation for sexual violence,” says Awalt of the idea she wants her event to convey.

The Toronto march was incited by a comment made by Const. Michael Sanguinetti during a crime prevention safety forum at York University in January. He said: “women should avoid dressing like sluts in order not to be victimized.” For Awalt, his comment was laden with a tone of victim-blaming or –shaming that places part of—if not all—the responsibility for a sexual assault on the victim.

“When you look at the different crimes, sexual assault is one of the crimes in our society where people hold the victim accountable for somebody else’s behavior,” says Irene Smith.

As Executive Director of the Avalon Sexual Assault Centre, Smith works in the province with the highest rate of sexual assault per capita at 40 attacks per 1,000 people (2004), and the city with the third highest rate of sexual assault in Canada at 92 assaults per 100,000. Nova Scotia also has one of the lowest rates of charge: in 2006, only 38.6 per cent of cases ended in a conviction; 14.9 per cent in an acquittal.

Smith attributes this discrepancy to a pervasive myth in legal institutions that victims of sexual assault are to blame for their attack. She is not aware of any blatant instances of bias in Halifax, such as that displayed by Const. Sanguinetti, but says myths and stereotypes surrounding sexual assault plague the criminal justice system.

Despite Canada’s rape shield law, which places strict guidelines on when and how an accuser’s sexual history can be used in court, Smith says defense lawyers “sort of slip it in through the back door” to discredit the accused’s credibility. She has also witnessed blurring of the Criminal Code of Canada’s definition of consent and the circumstances in which it cannot be provided, such as under the influence of alcohol.

These practices contradict much of what is known about the nature of this crime. “Sexual assault is about power and it’s about control,” says Awalt. “Therefore, the issue has nothing to do with how short my skirt is.” Statistics concur. Most sexual assaults are premeditated and opportunistic crimes of power—not sexuality. The majority of victims are attacked by somehow they know. And although the largest proportion of sexual assaults occur to women under the age of 25, people of all genders, races and age can be victims of sexual assault.

“So, the whole idea that how a woman dresses [then] she’s asking for it is really just kind of a way for society to let offenders off the hook; not holding them accountable for their behavior. Somehow,” says Smith, “holding the woman accountable for his behavior.”

Victim-blaming when it comes to sexual assault is not isolated within the legal system. Rather, says Smith, “It’s very much a societal myth and it’s often reinforced by society.” Male sexuality is valued over female sexuality, explains Ellen Taylor, Campaigns Coordinator for the Dalhousie Women’s Centre. She traces this dominance to the Puritan Age when female sexuality was demonized and virginity praised.

Today, little has changed. Taylor describes two conflicting stereotypes that guide our current views of human sexuality: that of men as “uncontrollable sexual beings,” and that of women as simultaneously “helpless” and “evil seductresses.” These stereotypes place the onus of not getting attacked on the victims, as well as the responsibility for their attack.

The repercussions on victims of sexual assault of this misappropriation of blame are devastating. Having grown up submerged in the myths of who is and who isn’t sexually assaulted, many come to believe they somehow incited their attack. Feelings of guilt are common, as victims tend to internalize the blame imposed on them by society. The trauma of sexual attack is extended far beyond the attack itself, says Taylor.

Awalt believes the stigma associated with sexual assault contributes to the estimated 88 per cent of attacks that go unreported. But events like the SlutWalk help to open a dialogue about sexual assault and its associated myths. Awalt hopes this discussion will lead people to reconsider society’s approach sexual assault awareness: “We do not teach enough that you do not rape, or you do not sexually assault people. Those words are not out there.”

Smith agrees: “For decades, we’ve been saying to women, ‘Don’t get raped;’ instead of saying to men, ‘Don’t rape.’” She sees a need to educate young men on exactly what constitutes sexual assault and consent, and the consequences of committing such a crime. Encouraging people to actively prevent sexual assault and to avoid engaging in being a bystander should also be included in awareness campaigns, she adds. “I think we need to start, as a society, realizing this is a societal problem and we need a societal response.”

The Halifax SlutWalk will begin at Cornwallis Park at 11 a.m. on Saturday, September 17.