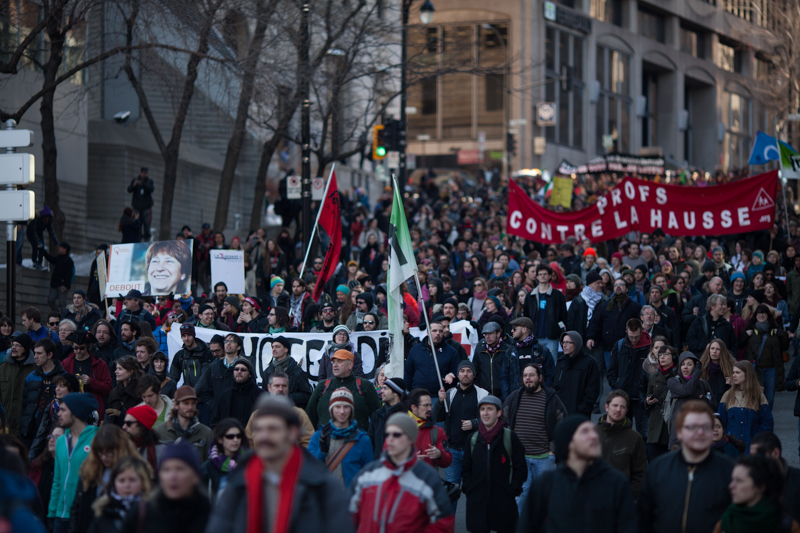 A rebellious and beautiful protest took the streets today in MontrÃ©al, to collectively denounce the economic violence of neoliberal austerity measures in QuÃ©bec.

Although mainstream media reports tilt toward a police-driven narrative, on the ground thousands and thousands of people collectively took control of the streets, risking arrest in openly defying P6, the MontrÃ©al bylaw that bans free protest.

Given the mass nature of the demonstration, organized by l'Association pour une solidaritÃ© syndicale Ã©tudiante (ASSÃ‰), possibilities for police interventions to halt the action were blocked. Although numerous people were injured, bruised and bloodied, in underhanded police violence during the final stretches of the action, after many protest participants departed.

Today’s protest takes place in a context of state repression.

Only a couple weeks ago hundreds were detained and kettled in a mass arrest at the annual protest against police brutality in MontrÃ©al. Over the last year thousands have been arrested and charged for taking the streets, while thousands are starting to pass through the legal system for charges stemming from the mass student strike in 2012.

In many ways today’s protest broke a fear barrier in inspiring ways, taking back control of the streets and reorienting the mainstream political narrative in the context of a grotesquely cynical QuÃ©bec election campaign.

At the heart of today’s mobilization was an open rejection of austerity, a mass rally in discord with corporate capitalism, an urgent call for radical economic revisioning and social justice.

On the streets thousands of people chanted « a-anti-anti-capitalista ! » as the ASSÃ‰’s banner at the front of the protest read « Aux riches de faire leur juste part ! » calling out growing economic inequality and the concentration of extreme wealth, exemplified by figures like PQ candidate Pierre Karl PÃ©ladeau.

As politicians from across the mainstream spectrum continue with cynically calculated moves toward QuÃ©bec’s election, the protest today equals an inspiring breath of politics shaped by grassroots people power. Walking on the streets, watching countless people's faces light up with expressions of joy and rebellion on this spring day, will remain in my mind forever.

The political target of today’s action were the ruling Parti QuÃ©bÃ©cois (PQ), who since taking office in the fall of 2012 have moved to embrace the violent logic of austerity, while embarking on a racist political campaign with the Charte des valeurs quÃ©bÃ©coises. PQ politicians are openly embracing disgusting racist tirades, as seen recently with Janette Bertrand, while mobilizing a xenophobic vision of QuÃ©bec nationalism that has lead to physical attacks against Muslim women on the streets of MontrÃ©al. At public hearings on the issue PQ politicians moved to officially ban the word racism at the hearings, while allowing racist rants to flow on the microphone.

In many ways the PQ’s disgusting embrace of racism is strategic in the context of austerity, as politicians cut funds for public institutions and heighten the economic violence of neoliberal austerity, a false sense of xenophobic nationalism is mobilized for the « QuÃ©bÃ©cois de souche » across class lines, while the economic reality worsens for the majority in reality, both for QuÃ©bÃ©cois and everyone else, especially racialized communities.

Reality and the PQ charter are very distant, as the mainstream QuÃ©bec nationalist movement, which is generally backing the charter, refuses to address the colonial nature of these lands, as indigenous peoples continue to face extreme marginalization and political violence.

On the streets today chants and speakers at the ASSÃ‰ rally clearly and loudly denounced the Charte des valeurs quÃ©bÃ©coises.

As thousands of students took the streets, the PQ's political exploitation of the 2012 student uprising is strikingly clear, politicking that then saw many politicians then wearing the carrÃ© rouge, who now are fully embracing austerity.

The PQ government has sustained a Parti libÃ©ral du QuÃ©bec imposed tax on public healthcare, that stands as a barrier to full and universal access to public health care, while raising no major challenge to the proliferation to private healthcare clinics. Also the PQ has moved to hike university tuition with indexation, while in parallel cutting public funding to universities and colleges.

Now moving into the depths of austerity, the PQ’s most recent budget sees a hike to public daycare fees. All austerity-driven moves that occur as the PQ sustains the majority of corporate tax breaks in QuÃ©bec, essentially giving millions upon millions to the elites of the corporate sector.

Again on public healthcare, PQ politicians are raising no serious concerns on the sustaining Conservative cuts to federal health transfers, while remaining silent on the expiration of the Federal Health Accord a few days ago, a move that the Conservatives in Ottawa are certainly embracing behind closed doors. Although the PQ claims the mantle of protecting the interests of people in QuÃ©bec, their silence on these critical austerity-driven shifts on healthcare policy are telling, policy changes that are deeply detrimental to the long term sustainability of a universal public health system.

Although polls indicate a PQ fall from power this upcoming week, the mood and focus of the protest today had little to do with electoral politics, but everything to do with building a grassroots movement against the violence of austerity economics. Certainly ASSÃ‰’s campaign against austerity, taking place within a broader movement, will continue post election with more street mobilizations, as most certainly a Parti libÃ©ral du QuÃ©bec government will only continue to deepen austerity.

On the streets today the feeling was inspiring precisely because such mass numbers were calling not for reform, but for transformative social change, voicing a radical and principled critique of the compounding economic injustice defined by neoliberal capitalism in QuÃ©bec and globally.

Stefan is a writer, musician and community activist who works with ComitÃ© d'action solidaire contre l'austeritÃ© - CASA in Montreal @spirodon