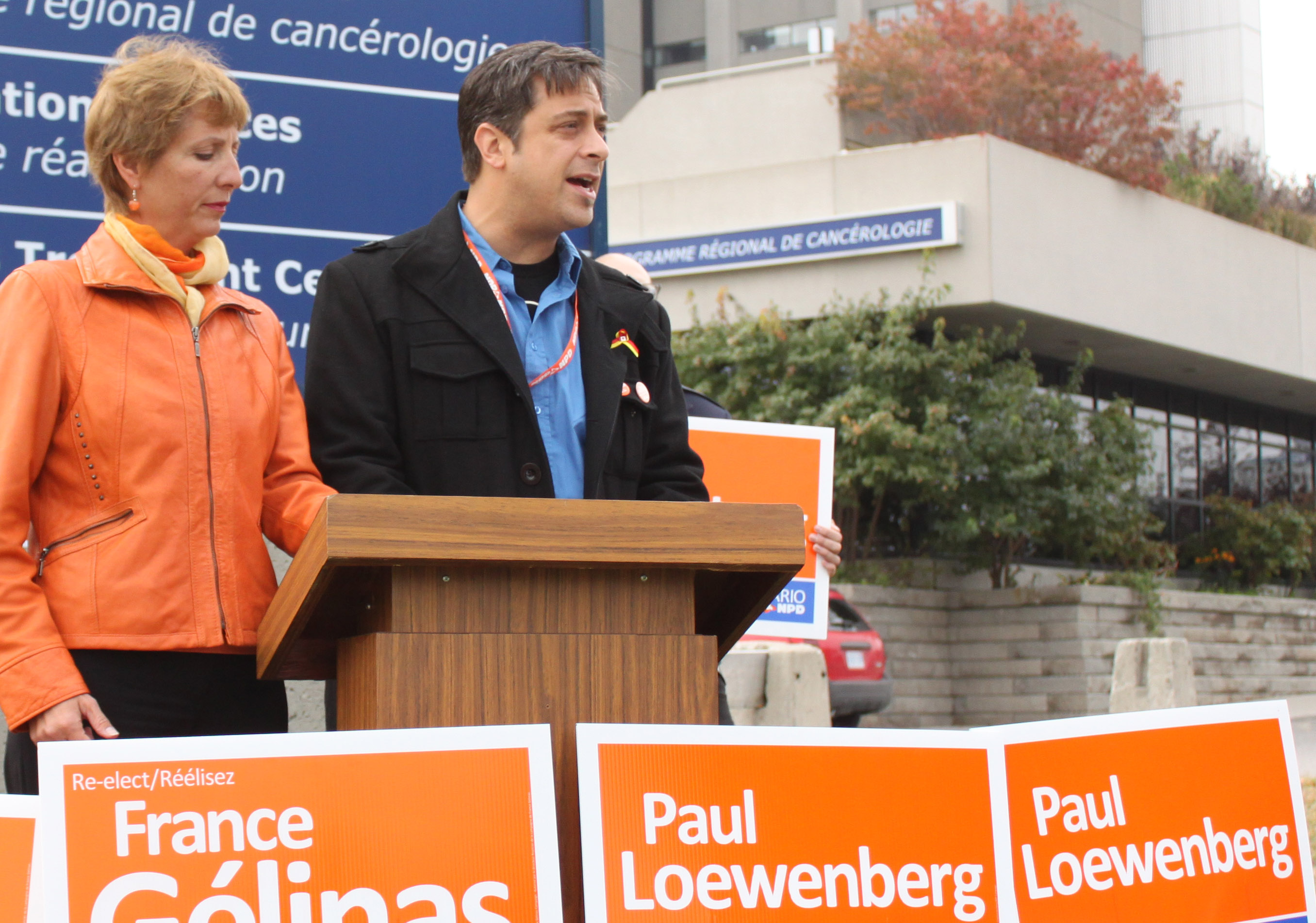 “Home care is failing in Nickel Belt,” said NDP incumbent France GÃ©linas outside the Sudbury Regional Hospital Sept. 21. “We must revamp home care (programs) so they meet the need of people-too many frail seniors are forced to use hospital emergency services in my riding,” she added.

“Northern Ontario can no longer be ignored when it comes to accessible health care,” NDP Sudbury Riding candidate Paul Loewenberg quipped beside GÃ©linas. “New Democrats will listen to the needs of Northerners, including the 25,000 Sudburians (who signed petitions) who are calling for a PET scanner.”
Loewenberg said up to a billion dollars is wasted by the Liberals on health care consultants and their studies.
“How many more doctors and nurses and hospital beds could we have?”

They were backed up their provincial leader Andrea Horwath who made an NDP  provincial health care announcement in Hamilton at the same time.
Horwath said if the NDP were elected they would cap the salaries of hospital CEO and executives at $418,000 per year.
“Forty eight hospital executives were paid more than $418,000 in 2010, compared to 12 executives in 2003,” she stated in her background release. The data was compiled from the Ontario Ministry of Financee but GÃ©linas added that the top executive at the hospital behind her was paid below the proposed salary cap already.

In May 2010 Horwath tabled the proposal in the Capping Top Public Salaries Act, which applied to executives across the public sector, according to her background paper. “It was defeated by the Liberals and Conservatives,” she stated.
Instead of paying inflated hospital executive salaries the NDP northern caucus would ensure

Sudbury had a PET scanner to serve all of Northeastern Ontario, Loewenberg said.
Richard Eberhardt, Loewenberg campaign chair, said the PET scanner promise would “resonate” with the Sudbury riding electorate because implementing it would mean the end of expensive trips to southern Ontario health centres where the equipment currently resides.
“It’s our issue alone in this campaign,” he said.

For his part, Bartolucci noted in his campaign brochure that Sudburians had “$7.3 billion reasons to be proud” including $2.2 billion invested in local health care since 2003 with 400 more nurses, 450 more long term care beds and $1.2 million to St. Joseph’s Continuing Care Centre for example.