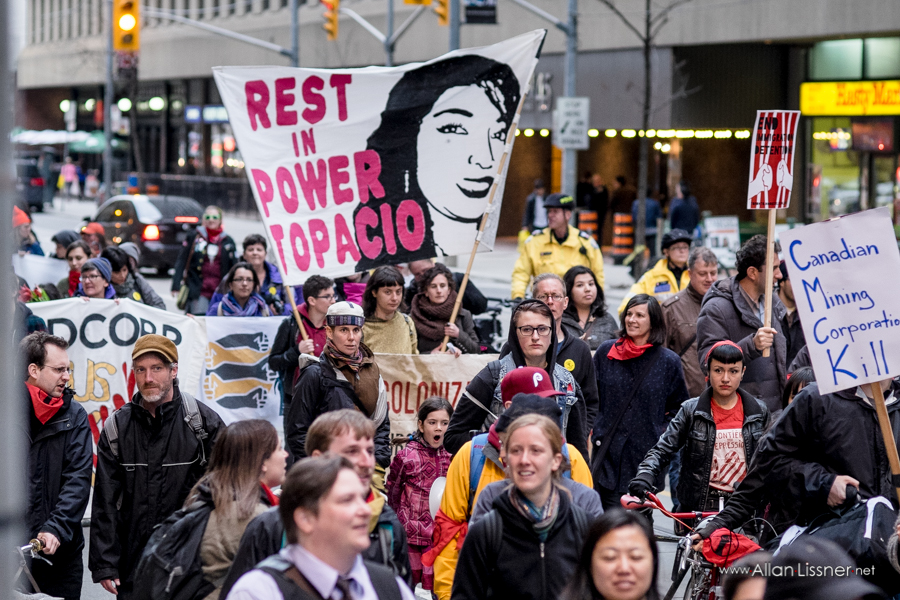 On May 1st, as Goldcorp announced the year’s profits at their annual shareholder meeting in Vancouver, more somber events were happening in Toronto and in Guatemala to hold the same company accountable for the murder of 16-year-old mining resistance activist, Merilyn Topacio Reynoso Pacheco.

In Toronto, over 60 people gathered on Adelaide Street in front of Goldcorp’s offices for a memorial to honour Topacio’s life and to denounce the violent and cowardly act that killed her. At the same time, Topacio’s family, friends and community members were gathering in Guatemala to commemorate her activism and leadership, and to demand justice for her death.

Topacio was assassinated by unknown gunmen on April 13th in Mataquescuintla, Jalapa, Guatemala. Her father, Edwin Alexander Reynoso who accompanied her at the time, was also shot and remains in critical condition. Both Topacio and her father were active in the resistance against Canadian company Tahoe Resources' Escobal mine, in San Rafael las Flores, Santa Rosa. Topacio, along with her work as the Youth Coordinator of the Resistance in Mataquescuintla, was also a poet and musician.

Canadian company Goldcorp owns a 40% share in the Escobal mining project which Topacio and her father have been resisting in defense of their community's right to prior consultation, self-determination and human rights. At her funeral, Topacio's mother promised: “The resistance doesn't end here, my love.”

“One of the ways we can honour Topacio’s life and her mother’s promise is to stand here today and denounce Goldcorp for their responsibility in this act of violence, as well as in all of the violations of human rights and environmental rights that community members have faced since the mine opened in their region,” said Rachel Small, a member of the Mining Injustice Solidarity Network (MISN).

Attendees heard some of Topacio’s poetry, her favourite music, and speakers who shared messages of solidarity and a commitment to continue to support this struggle. Candles, flowers, and a large painted banner that said “Rest in Power, Topacio” filled the busy downtown corner as people expressed their collective sadness, anger, and determination, as well as a moment of silence.

As the memorial was taking place, 36 international human rights, environmental justice, and solidarity organizations delivered a letter to Guatemala's Attorney General, Claudia Paz y Paz, demanding justice for the attacks against Alex and Topacio Reynoso. “We condemn this violent attack and call on your office to conduct a full and impartial investigation to ensure that that those responsible are brought to justice,” the letter states.

The document also identifies other incidents of violence and injustice that have occurred in communities surrounding the mine, including two occasions when police violently evicted a peaceful, legitimate, and legally located encampment outside the mine. The former head of security for the mine is currently facing charges for shooting peaceful protestors during one of these instances.

After the memorial, participants joined in the annual May Day march through Toronto streets, sharing with hundreds of people the message that Canadian mining companies must be held accountable for their actions. In solidarity with the international M4 movement, many dipped their hands in red paint symbolizing the destruction of health and the environment brought about by Goldcorp's mines.