Toronto's first Black police chief is retiring early. His legacy was to maintain the brutal status quo of policing. What comes next?
by
Fernando Arce 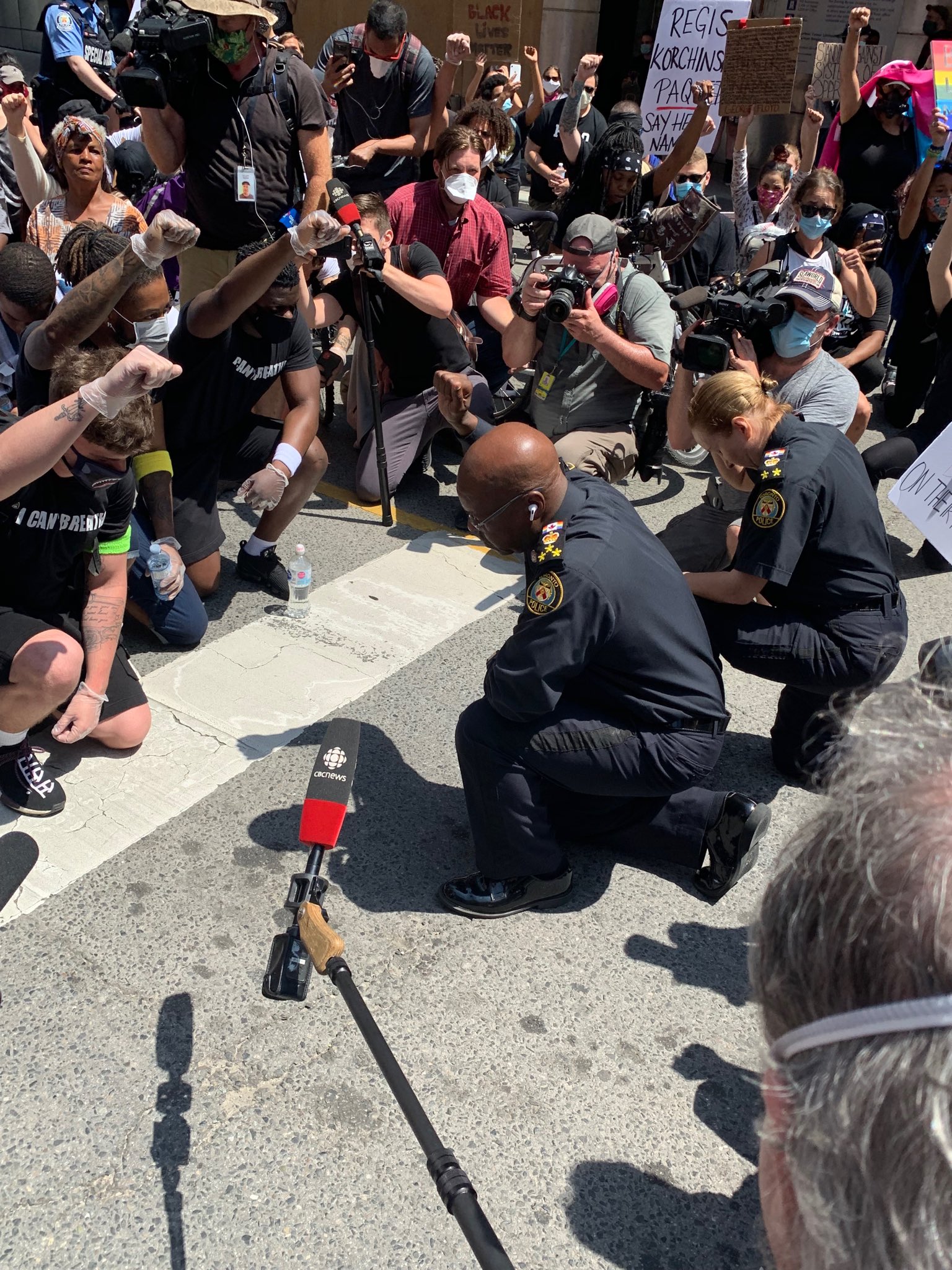 “If we don’t take action now,
We’ll settle for nothing later”
- Rage Against the Machine

Toronto Police Chief Mark Saunders said on June 7 that he would be stepping down as of July 31 – surprising many, including his rank-and-file.

Just two days before, he had knelt with people at a rally against anti-Black racism, which critics denounced as a choreographed photo-op for cops.

So it came as a surprise when he suddenly said that he wanted to cut his contract short by eight months to become a "full-time parent and husband," after 37 years on the force and four as chief.

Though he cited a "host of reasons" – while failing to specify any in particular – it's unclear exactly what prompted his decision. He claims it wasn't because of #DefundThePolice and that it didn't come from higher ups, including the mayor or premier.

But the timing “is not a coincidence,” Syrus Marcus Ware, an artist and organizer with Black Lives Matter - Toronto, told the Media Co-op.

It is clear that his resignation is a testament to the increasingly powerful #DefundThePolice movement.

And it’s only the beginning.

With all eyes on them, cops around the world are “scrambling to try to figure out what they’re going to do to prove their relevance” to communities, says Ware. This means in the days and months ahead there will be “a lot of shake ups in police forces as they try to desperately maintain control.”

A Cog in the System

Naturally, at the time, some folks wondered whether he'd be the “better of two evils,” according to Butterfly goPaul, a resident member of Jane Finch Action Against Poverty (JFAAP) who spoke with the Media Co-op.

But having been brutalized and surveilled by police for far too long, members of that working class neighbourhood – mostly Black and Brown folks and multi-generational immigrants -- found it hard to believe that simply electing a Black chief would make a substantial difference. “Whether it’s a Black cop leading it or not,” says Butterly, “that distrust is intergenerational.”

It soon became evident Saunders was merely a keeper of the status quo and that no amount of luke-warm, reactionary reforms would fix the problem of anti-Black racism in Toronto’s police.

Perhaps one of his biggest failures was on the racist practice of carding. In 2018, three years after committing to eradicate racial profiling through “proper training,” the Ontario Human Rights Commission published a report stating that a black person in Toronto was still nearly 20 times more likely than a white person to be shot and killed by police.

Neil Price is a writer and the Associate Dean at the Faculty of Social and Community Services at Humber College. In an interview with the CBC, he noted that “right out of the gate,” Saunders “struggled to build...essential relationships” with the communities he was supposed to serve.

In 2016, for example, Saunders refused to meet BLM-TO's members who clamoured for accountability outside his office following the police murder of Andrew Loku. In 2018, he blamed the LGBTQ community for not cooperating in the investigation of Bruce McArthur, who’s been charged with the murder of six people in Toronto’s Gay Village, even though members of that community had been publicly seeking answers since 2017.

Most recently, Saunders failed to act after Regis Korchinski-Paquet was thrown off her 24th-floor apartment balcony by police, according to witnesses. Her family had called the cops to help the 29-year-old, who was in distress. Cops claim she jumped.

Even by reformist mainstream standards, Saunders was seen as a passive cog in the system, unable and unwilling to deviate from the forged path or to take a principled stance. “He held his place as chief, but I'm not sure he made very much useful change," John Sewell, a one-time Toronto mayor and the coordinator of the Toronto Policing Accountability Coalition told the CBC.

The reality is that anti-Black racism is deeply interwoven into Canada’s colonial institutions and no amount of reforms will fix that. Simply “increasing diversity in the police [won't] solve...the inherent anti-Blackness and white supremacy that is built into the police system in Canada," Ware said in a recent TVO interview.

The very existence of institutions like the police is founded on the criminalization of Black and Indigenous people in order to protect the colonial plunder and capitalist development of Indigenous lands. So “it doesn’t matter what kind of training you do,” adds Butterfly. You can “put in a Black [police] chief and put all the anti-oppression training,” but the institution of oppression will still remain.

That’s why the movement to #DefundThePolice refuses to back down from its demand to fully disband police forces. “There is no ‘better’ form of policing,” Ware says. “We need a...different system.”

Understanding the increasing weight of this demand, some cities have been looking into reducing police budgets. In Toronto, two councillors have proposed a 10 percent reduction to the Toronto Police Service's +$1 billion budget.

That’s a welcomed “start,” says Ware. But “don’t forget: we’re coming for the other 90 percent.”

Butterfly echoes that: “It’s all or nothing.”

A Space to Dream

Saunders’ quitting, activists say, should be seen as a welcomed opportunity, not a void to fill. It’s a half-opened door “that we can kick open,” says Butterfly.

Butterfly, who’s been organizing in the Jane and Finch neighbourhood for over 27 years, says that money could be much better used in neighbourhoods that have been historically underfunded and neglected.

“Teachers that care about our children when they come teach them. We need mental health services that really speak to intergenerational trauma and poverty and systemic racism. We got to give love and put it back into the community instead of policing and surveilling and exploiting people coming in… We need to put back social enterprise and economic development. We have to give space for children to dream.”

When this happens, results are palpable.

Andrea Vasquez Jimenez is the co-director at LAEN Latinx, Afro-Latin-America, Abya Yala Education Network, one of the lead organizations that successfully fought to scrap the Student Resource Officer (SRO) program in 2017 from the Toronto District School Board. Until then, the program consisted of stationing cops throughout Toronto high schools.

As a result of scrapping that program, she explained during a recent webinar, there has been a “cultural shift away from punitive disciplinary actions…[to] restorative practices" like contacting parents and guardians and increasing social worker support.

This has had “immense positive impacts” on students, with suspensions and expulsions "plummeting" by 24 and 53 percent, respectively, and graduations increasing between 10 and 15 percent.

This is a time of upheaval, and there seem to be more questions than there are answers. And that’s okay.

What is clear, says Ware of BLM-TO, is that “we are in a moment of system collapse” as “capitalism [draws] its last breath right in front of our eyes.” And as the Old System is destroyed to make way for the New One, “possibilities for a lot of change and new ideas to be planted and to grow into new ways of working and organizing” must be explored and embraced.

There are small victories along the way too.

In Atlanta, for instance, that police chief also resigned following the killing of a black man sleeping inside his own car; police budgets are coming under scrutiny; police accountability bodies like the Special Investigations Unit in Toronto have committed to collecting race-based data, which can help determine racial discrimination patterns; software giants in the United States are refusing to give their facial recognition software to police until a national law is in place.

These concessions are a good start, but they must be capitalized on. The tide of revolution must not be allowed to roll back.

“Revolution is not a one-time event, [but] a process,” says Ware. “We could see abolition in our lifetime, [and] these are the steps that we must take to get to our broader goal of abolishing the police state.”

Of course, it won’t be easy.

The very idea of defunding police forces seems radical to many because policing is the only way the system has taught us.

We've been led to believe that people who commit crimes must be punished and put away as a form of providing justice to the victims. For many, first questions about a cop-less society conjure images of murderers and rapists running amok. "What about violent crime?" we quickly ask.

Yet, according to StatsCan, between 50 and 80 percent “of the calls police respond to are in fact non-criminal in nature and comprise incidents such as alarms, disturbances, domestic disputes, traffic accidents, sick or injured persons, overdoses and mental health-related calls.”

And according to the 2018 Corrections and Conditional Release Statistical Overview, since 1998, overall crime rate has decreased by 36.3 percent. Since 2000, violent crimes decreased by 26.5 percent.

Additionally, police are actually “terrible” when dealing with victims of domestic or gender-based violence, says Sandy Hudson, a leading member of BLM-TO. During a recent webinar, she explained that cops neither stop nor prevent those types of crimes, and that they often show up after they’ve occurred.

In fact, she said, they are “really bad at attending to people who are not the right kind of victims,” such as Indigenous women, sex workers and people from communities “traditionally undervalued in our society.”

Instead of police, she proposed, it should be people trained in how to be sensitive to victims’ needs that attend these situations. Ensuing investigations should be conducted by “civilian-based agencies that are better equipped to address our needs for safety and security.”

Currently, most people thrown into the criminal justice system are themselves victims of underfunded schools and neighbourhoods; of rampant unemployment as a result of that underfunding; of poverty as a result of neglect; of substance abuse as a result of hopelessness; victims of racist profiling; criminalized land-defenders; victims of a neoliberal agenda that protects private property above human life.

Attempted murder, homicide and sexual assault, in fact, make up only 0.06, 0.09 and 0.86 percent of cases in adults courts, according to the Statistical Overview.

Knowing this, why should our default be to call police in emergencies?

Even cops know they have no business being the first responders to these situations.

“I’ll be the first to admit, we aren’t the appropriate agency to be dealing...with mental health crises or homelessness,” Peel Police Chief Nishan Duraiappah told the CBC in a live interview June 18. “We don’t want to be the ones responsible for those moments of crisis that we are not equipped for.”

When Saunders was confronted with the idea of losing 10 percent of their obscene budget, he ridiculed the idea, calling it “naive.”

But just imagine if that money going to paying cops’ salaries to attend non-violent emergencies was put to better use.

The faster we come to understand that cops shouldn’t be the default for responding to emergencies, the faster and easier it will be to defund the police, and the less pain and death we will see.

As Butterfly says, “you invest in people and communities, and they’ll do well. [But] you put policing, surveilling and harm, and people die from the inside out – if the cops don’t get at you first.”