Search on for missing Neskonlith councillor

Search on for missing Neskonlith councillor 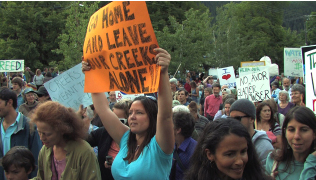 MAY 9, 2011--What was supposed to be a fun Mother’s Day camping trip has turned into a desperate search for a missing Neskonlith Indian Band councillor.

Neskie Manuel, 30, was last seen sitting by the fire at his family’s campsite on the Neskonlith reserve early Sunday morning.

“Nobody knows where he is,” relative Michelle Jones said Monday. “I don’t feel good about it.”

The hours since Manuel disappeared have been long for his family, who have scoured the open terrain around the family’s plot of land on the southwest tip of Neskonlith Lake.

A team from Kamloops Search and Rescue took up the search late Monday afternoon. Jones also put a request out to band members for anyone with quads, horses and boats to meet at the Neskonlith Band Hall at 8 p.m. to join the effort if Manuel isn’t found by then.

The family gathers for a camping trip every Mother’s Day. Manuel was the last one sitting around the campfire, with a cousin wishing him goodnight at about 1 a.m. Sunday.

Manuel might have wandered off, but Jones can’t imagine why. She said none of the 30 or so campers heard anything.

There’s no chance he got lost, as Manuel knows the property well. And there are no cliffs for him to stumble over in the dark, she said. It’s a four-kilometre walk to the nearest road, but Manuel left his belongings behind.

“He’s gone off the grid before, but he takes his stuff and he tells someone,” said Jones.

Manuel isn’t married and doesn’t have any children. He’s part way through his first term as a band councillor and is a former helicopter mechanic, computer programmer and radio show host.

He’s six feet tall, weighs 180 pounds and has short hair. Jones said Manuel wears glasses but might not have been wearing them when he disappeared.

re-posted from the Kamloops Daily News