Should Canadians Be Worried If Trudeau Appoints Bill Blair To Cabinet?

Should Canadians Be Worried If Trudeau Appoints Bill Blair To Cabinet? 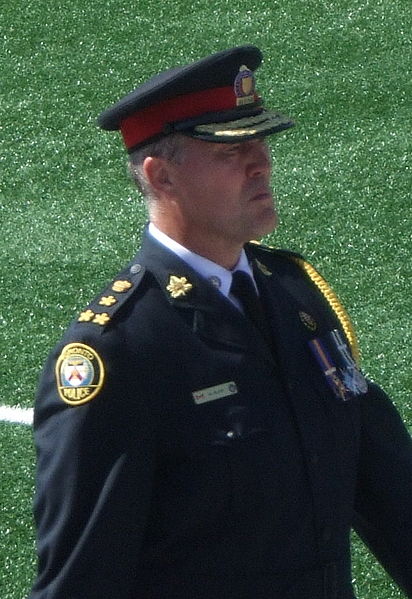 Bill Blair, former Chief of Toronto Police Services from 2005-2015, was elected in October in the riding of Scarborough Southwest to represent the federal Liberal Party. There is speculation that Blair will be included in Trudeau's list of cabinet ministers on Wednesday, perhaps in Public Safety, Defence or Justice.

What legacy does Blair bring from his time with the Toronto police?

Bashiyr Douglas (traditional name Snefer Sena Hotep) had his first interaction with Toronto police two weeks after moving to the city from the southern United States in 2011. Walking near his home in Scarborough that night "three police cars drove up and blocked me in" says Douglas. "They grabbed me and patted me down, 'let me see your ID, we need to make sure you live here'," he remembers them saying.

Incidents like these, foreign to me as a white person in Toronto, have been all too familiar for racialized people like Douglas (a black man) under Blair's police force.

I, as with many people I know, did not understand the magnitude nor the specifics of racial bias in the police until Desmond Cole's Toronto Life article was published this spring, describing his personal experience of having been stopped and questioned over 50 times by Toronto police for seemingly no reason other than being black. The now-infamous practice is known as "carding". After Cole's piece was published, stories came pouring out from all over the city, with white people and others seemingly more willing to listen than before.

Douglas, thinking back on his interactions with Toronto police calls it "racial profiling, as they say: carding. It's the same as the States. The same mindset. White supremacy, you know?"

Horrific treatment of racialized groups by police, like of indigenous women in Val-d'Or Quebec and the Highway of Tears in BC, is a widespread and pressing issue in Canada. The previous government took little to no action. Some hold higher hopes for the incoming Liberals.

But whether Blair has the track-record to address these deep problems is a curious question. He became Chief of the Toronto force in 2005 acknowledging racism there. He vowed to increase diversity and be more responsive to racialized communities. Some steps were taken to open dialogue. But right from the beginning he institutionalized carding, a patently racist practice, and his support for it has hardly wavered. A revised carding policy was approved by the Police Services board in April 2014 but Blair disregarded the directive and did not implement the changes.

Under Blair carding has also represented a massive information-gathering project. The data collected at each carding stop is put into a central system, and the public doesn't know what that is used for or how long the information is kept. These carding stops and information gathering have been called a violation of "constitutional and privacy rights" by the Law Union of Ontario.

Edward Keenan at the Toronto Star noted this spring that Blair's persistent defence of carding "incinerates his own legacy of goodwill". It appears Blair came in promising real changes around addressing acism then delivered few, perhaps even working in the opposite direction. It is not a promising legacy.

Another blemish in Blair's career was his handling of the demonstrations at the G20 Summit in 2010. Hundreds of peaceful protesters in downtown Toronto were detained in cages or forced to sit in the pouring rain surrounded by police. Ontario Ombudsman AndrÃ© Marin called it “the most massive compromise of civil liberties in Canadian history.” (To be fair, the internment of Japanese Canadians during WW2 and seizure of their property was certainly worse.)

Major media outlets have not forgiven Blair yet, with both the Globe and Mail and Toronto Star penning recent editorials on his actions during the G20 Summit. Citing similar concerns, Political Director Brent Patterson at the Council of Canadians last week called for Trudeau not to appoint Blair to cabinet.

Trudeau, who becomes Prime Minister on November 4, has defended Blair. Some critics might not be surprised by Trudeau's support, given the Liberal leader has been criticized for "subtle racism" and stereotyping the African Canadian community.

The Liberal's approach to crime, including voting for surveillance-state Bill C-51, is hard to distinguish from that of the outgoing Conservatives. A Blair appointment to cabinet that may indeed signal the supposed "Real Change," really means more of the same when it come to addressing racism and protecting civil liberties.