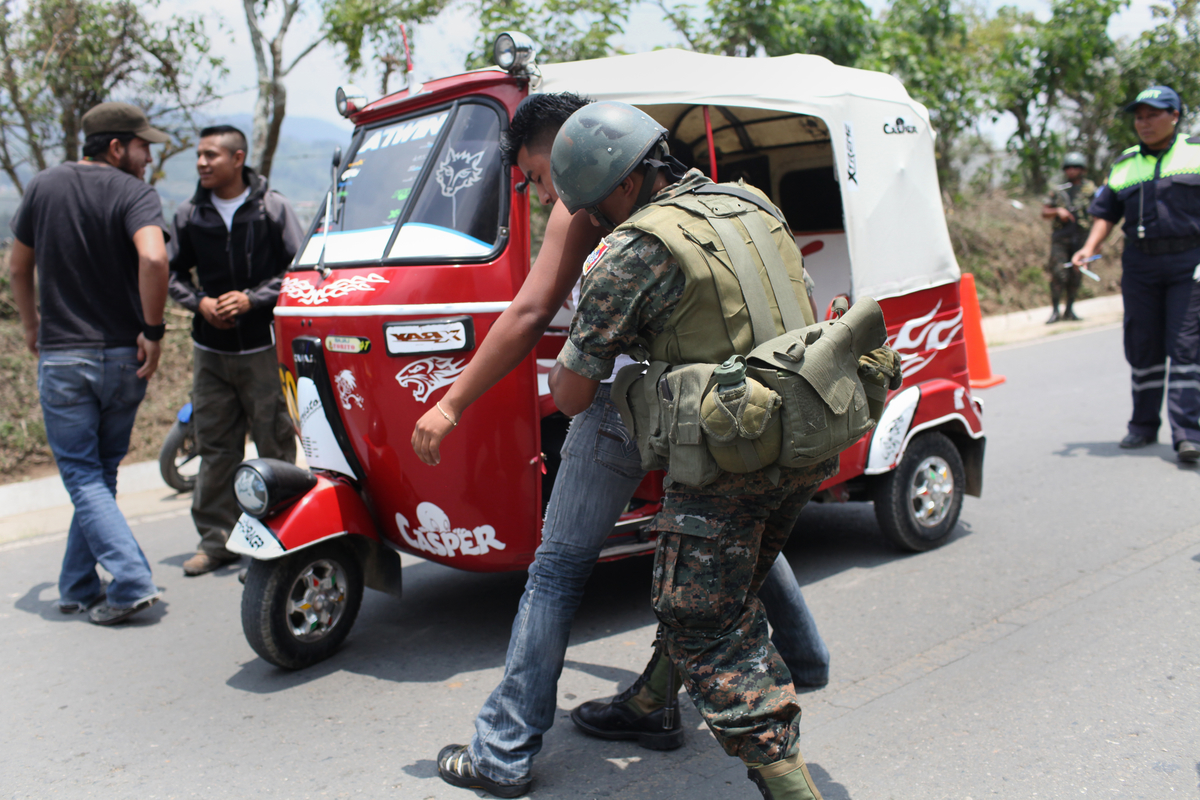 “I’m here to say, sometimes I can’t take the tears, the blood we’ve seen,” Santiago continued. “I’m here to testify so that we never experience this again in this life.”

Santiago was one of hundreds of thousands of Guatemalans who bore the brunt of the counterinsurgency campaign waged by the Guatemalan military during the country’s 36-year internal armed conflict. Truth commission reports published after the Peace Accords were signed in 1996 found that the military had targeted mostly indigenous communities, employing scorched earth tactics that included extreme forms of sexual violence, acts of cultural genocide, and the massacre of entire communities under the guise of combating guerrilla forces.

Despite great personal risk for speaking out, more than a hundred witnesses testified alongside Santiago with the hope that in telling their story, these horrific crimes would never happen again. For many Guatemalans, however, heavy military repression continues.

Resistance movements against extractive industries have gained momentum in the past several years in Guatemala. This stems from a pattern where territories have been granted to foreign mining and energy companies without the free, prior and informed consent of local communities.

Such is the case in San Rafael Las Flores, a village made up mostly of peasant farmers in southeastern Guatemala. Residents grow tomatoes, onions, beans, corn and a variety of other crops for both export and local consumption. In this same agricultural area, an exploitation license to develop a silver mine was granted to Canadian mining company Tahoe Resources, Inc, on April 3, 2013.

Despite enormous local opposition, the Canadian company, 40 per cent owned by Vancouver giant Goldcorp, is set to begin commercial production of silver in early 2014.

Guatemala’s right-wing president Otto PÃ©rez Molina, a retired general and adamant genocide denier, responded to protests in the area by declaring a state of siege on May 2 of this year. He sent in the military and suspended civil liberties and constitutional rights for residents.

This marked the second state of siege in just over one year. On May 1, 2012, PÃ©rez Molina declared a state of siege in the municipality of Barillas, in the northwestern highlands of Guatemala, after major protests erupted when security guards for the Spanish hydroelectric company Hidro Santa Cruz shot and killed two community members.

That state of siege lasted for 16 days, and dozens of people were arrested, many of them leaders in the resistance movement. None of those arrested was ever charged. After spending months in jail, the men were finally released for lack of proof of ties to violence or organized crime.

According to Yuri Melini, Director of the Centre for Legal, Environmental and Social Action (CALAS), when the government declares a state of siege, it represents a restriction of many civil liberties and constitutional rights. “The freedom of mobility, the presumption of innocence, the right to protest, and freedom of association are among some of the rights that are suspended,” said Melini.

One year after the state of siege in Barillas, the government declared another in four municipalities near the Tahoe mine—San Rafael Las Flores and Casillas in the department of Santa Rosa, and Jalapa and Mataquescuintla in the department of Jalapa—using the pretext of combating narcotrafficking and organized crime. “We believe the [state of siege] was enacted in order to repress the social protest against the mine,” Melini told The Dominion. “The government inserted the military into the picture and, with it, fear into the population.”

On April 29, protests took place in communities near the mine to denounce rising violence and the increased police presence in the area since Tahoe began exploration several years ago. Community members were also demonstrating against violent actions taken two days earlier by private security employed by Tahoe Resources who shot at members of the peaceful resistance movement, sending five men and a youth to hospital with bullet wounds.

The company denied wrongdoing. “Our investigation has shown that only non-lethal measures were taken by our security,” stated Tahoe CEO Kevin McArthur in a press release. “We regret any injuries caused by rubber bullets, but we take the protection of our employees and the mine seriously.”

But hard evidence flies in the face of McArthur’s claims. Melini says ballistics reports from the public prosecutor’s office and the National Institute of Forensic Science show that live ammunition was used during the shooting. All of the men who sustained injuries have since been released from hospital. At least three of them had lead bullets taken out of their bodies. Seventeen-year-old Luis Fernando GarcÃ­a Monroy, who suffered extensive damage to his face from a bullet wound to his cranium, requires facial reconstruction surgery.

Since then, two Tahoe employees, including the company’s head of security, have been arrested and placed under house arrest awaiting the start of evidentiary hearings in July.

Tahoe’s refusal to acknowledge the violence surrounding their project spurred the Justice and Corporate Accountability Project (JCAP) at Osgoode Hall Law School in Toronto to file an official complaint against the company with the Ontario Securities Commission on June 1.

“We are concerned that Tahoe Resources has downplayed the serious crimes for which its employees have been accused in comments to the press and that it has not issued an official statement since the wiretap evidence came to light that would correct earlier errors,” stated lawyer Shin Imai of JCAP in a joint press release issued by JCAP and MiningWatch Canada.

According to Sandino Asturias from the Guatemala-based Centre for Guatemalan Studies (CEG), it is nothing new for the government to use states of siege. The legal framework stems from the Law of Public Order, adopted in 1965. The Law of Public Order gives unrestricted freedoms to the military to intervene in issues of internal civilian security once a state of siege is declared. “The military is an apparatus of the state, whose main focus is the defense of territory and sovereignty,” said Asturias in a phone interview with The Dominion.

The Law of Public Order contradicts the Peace Accords, which saw an important separation between the military and civilian institutions, like the national police. “[States of siege] completely change democratic processes in the country, and revert it back to military control,” said Asturias. “When this happens, abuses occur and it makes the rights of everyone in the country more vulnerable.”

Guatemala has one of the highest murder-per-capita rates in the world, ranking seventh according to a United Nations Study from 2011.

This is the context within which President Otto PÃ©rez Molina came to power in January 2012. His platform was a promise of mano dura—the use of an iron fist to restore security in the country and combat drug trafficking and organized crime. But observers say the militarization under PÃ©rez Molina’s program is taking place in resource-rich areas.

“The pretext for states of siege is framed as one of civilian security,” Asturias told The Dominion. “But actions being taken by the military are in places where there aren’t high rates of violence or insecurity in the country. Instead, it is where there are mining and strategic megaprojects. The military enters under the guise of protecting civilian security, but instead it is to protect private mining interests.”

The same week that RÃ­os Montt was convicted of genocide, communities near the Tahoe mine were remilitarized under a state of siege. The decision to convict the former president for his crimes has since been overturned by the Constitutional Court in a 3–2 decision that is sending the case back to a prior stage in the trial with a new panel of judges. The case is expected to resume next April.

But survivor and President of the Association for Justice and Reconciliation Benjamin JerÃ³nimo made the links between the past and present clear in his concluding statements before RÃ­os Montt was convicted. “All who died, all the family members that we lost, we were not animals. They were not dogs or beasts…they were human beings who had the right to life, the right to freedom, right to peace, to security,” he said.

“We should no longer have the military in communities. It is no longer time for that. That is why the Peace Accords were signed, to respect rights.”