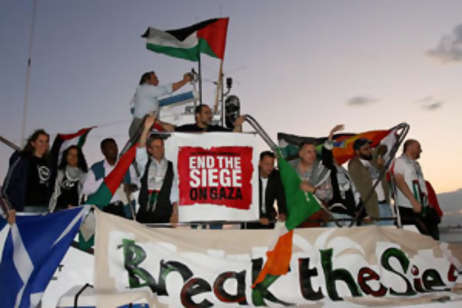 It was easy to choose the campaign for the second installment of the Tipping Point: after a year of preparation, June 27-July 1 is the week for the Canadian Boat to Gaza (CBG). If strong support is signaled across Canada, it could ensure the survival of the all those on board, a break in the blockade against Gaza and a big step forward in the international movement for a free Palestine. Not bad for a project that began in earnest roughly a year and a half ago.

A handful of organizers, as Wendy Goldsmith explained to me from her home in London, Ontario, had travelled to Egypt for the Gaza Freedom March in December 2009. In lock-down, on a bus in Cairo, the initial discussions about a CBG began. Over what turned out to be five days, the organizers waited to see if they would be able to leave Cairo and continue the historic attempt of opening the border to Gaza through Egypt.

During the waiting game, thesecond international flotilla was announced “We saw how the stronger the pressure to not allow the seige to be broken, the greater we need to resist, the more we have to become better organizers, and the group of us all agreed: Canada needed to have a presence on the convoy. We wanted to make sure there would be a ‘Canadian Boat to Gaza.’ So that’s when we started putting plans in place,” explained Wendy.

The immediate and primary goal of the campaign is to challenge and break Israel’s blockade on Gaza. The Canadian Boat, named Tahrir (“Liberation” in Arabic) departs eminently from various points in the Mediterrean. The 45 passengers from across Canada will sail the sea and, if all goes well, enter Gaza, bringing medical supplies and, hopefully, leave with new passengers.

The secondary goal is to challenge Canada’s complicity and political and economic alignment with Israel. Wendy elucidates.

“Last month, John Baird, [Canada’s] Foreign Affairs Minister, called the boat ‘provocative’ and warned that he supported Israel’s so-called ‘right to defend themselves’ against the flotilla, and that Canada wouldn’t be coming to the help of the Canadians if there was an attack [by Israel on the CBG]. This is unacceptable. The government should be ensuring safe passage and putting pressure on Israel that they won’t harm the boat.”

The Canadian Boat to Gaza is firmly rooted in an international movement for the freedom of the people Gaza, and for a free Palestine. When chatting about public reactions to the boat, Wendy points out a common misunderstanding, which is to look at the issue through a charity, rather than solidarity, lens.

“One of the arguments against the boat is that humanitarian aid can get into Gaza through a different route, so why all the energy to get the boat through? Some people only want to understand this as an access-to-humanitarian-aid issue. Which it is not. It’s about freedom. We want people in Palestine to have the same freedom as we have here in Canada: freedom of movement, of speech, as well as access to medical supplies, education and food. We need to break the border for people. Not just provide humanitarian goods.”

Over the past 17 months, the core group of 10 organizers of the Canadian Boat to Gaza worked impressively hard with awe-inspiring results. The significant time spent on outreach to other Palestinian solidarity groups paid off: their network quickly grew to 200 organizational endorsers—from labour to faith-based to community and social justice groups, with hundreds of people across the country donating time, energy and money to the project. The Canadian Boat to Gaza raised more than $350,000 from fundraisers and individual donations across the country.

Wendy believes the Canadian Boat to Gaza is having a positive impact on social movements across Canada.

“In terms of solidarity it has been incredible—in terms of energy and connecting. There needs to be lots of actions to eventually lead to the opening of the borders and ending the blockade. Everything is valid; no one knows what the one definite action will be. This is one tactic among many, and for it to be successful, this is the week where we need everyone across Canada to step up and support the boat.”

The Canadian Boat to Gaza is urging everyone to speak up in support of its massive act of civil disobedience. Those on board and those organizing ask everyone to contact their local MPs and ask what they are going to do to ensure safe passage of the Tahrir. As it stands right now only one MP has publicly endorsed the boat. NDP’s Alex Atamanenko, representing the Southern Interior of BC, is the lone voice backing the boat and the campaign.

After contacting the representative paid to listen to your concerns, Canadians need to put pressure on corporate media both locally and nationally. Believe it or not there has been very little coverage of the Canadian Boat to Gaza’s courageous trip. Call or email the editor and ask why there are no reports, editorials or opinion pieces on the action.

Finally, people are encouraged to come together and show their support for the boat. Actions are already being prepared in a dozen cities, with the hope that there will also be autonomous banner drops and flashmobs as well as leafleting across the country.

More info on the Canadian Boat to Gaza can be found here: