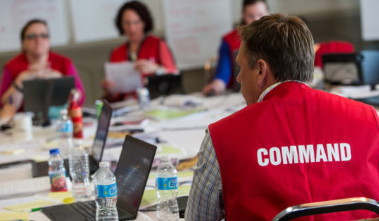 In a statement made to the Media Co-op just before 10 am PT on Monday, August 16, a spokesperson for the Trans Mountain pipeline indicated, "The Trans Mountain Pipeline and our facilities remain operational and we have equipment and plans in place to protect our facilities in the affected areas including Kamloops, Merritt and the North Thompson Region."

On Sunday evening, the town of Merritt, BC, issued an evacuation alert due to wildfires, and the Coquihalla Highway was shut down between Hope and Merritt. The pipeline follows the highway along that stretch. The sky in the area on Sunday afternoon was dark and red, filled with smoke and ash.

The fire, known as the Lytton Creek wildfire, is the same one that levelled the nearby town of Lytton in June during a record-shattering heat wave.

The pipeline project, which aims to transport tar sands oil once constructed, is fully owned by the government of Canada. It is opposed by traditional Indigenous governments in the area, such as the Secwepemc Nation.

The construction is also happening amid an ongoing climate emergency, the urgency of which was reiterated last week with the release of the dire first section of the new Intergovernmental Panel on Climate Change (IPCC) report. Greenhouse gas emissions need to be reduced quickly and significantly, prompting groups like the Tsleil-Waututh Nation Sacred Trust to assert that the TMX pipeline's construction jeopardizes "international and national climate commitments and puts our planet at an even greater risk than it sits at already."

These risks include increased occurrence of extreme weather events such as wildfires, heat waves, and flooding.

The Liberal Party of Canada, which bought the pipeline project in 2018 while they held a majority in parliament, yesterday initiated an election, two years ahead of schedule.