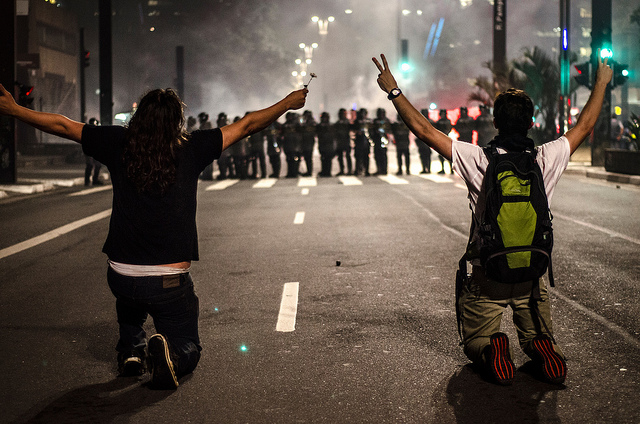 CURITIBA, BRAZIL--As the world tuned into the FIFA Confederation Cup this week, Brazilians took to the streets, in a series of protests that has everyone in the country talking. Police repression against the Movimento Passe Livre (Free Fare Movement) and protests against exorbitant World Cup preparations have struck a chord with the population and have provoked a national dialogue on more than just transportation.

Protests across the country are planned today. In SÃ£o Paulo, Brazil’s largest and most important city, over 240 000 people have joined the FFM's Facebook event, one day before the organization will sit-down with the left-leaning mayor Fernando Haddad. Born in 2005, the FMM is a social movement that aims to make a collective transportation a public good. Demonstrations started last week and were marked by severe police repression. The protests have spread to other urban centres such as Rio de Janeiro and Brasilia. Journalists from various media outlets have been targeted and the police has been widely criticized for shooting rubber-bullets and using tear gas on peaceful demonstrators.

The movement, referred to as the “salad uprising” after a reporter from Brazilian magazine Carta Capital was arrested for carrying vinegar in his backpack, is evolving quickly as different political currents jockey to define and articulate priorities. This divergence is aided by the government and media that try to draw the line between legitimate and illegitimate demands and tactics.

Earlier this year, FFM protests in GoiÃ¢nia, Natal and Porto Alegre all won important concessions, but the movement only captured national and international earlier this week in SÃ£o Paulo. Images of injured protesters and aggressive tactics including shooting rubber bullets from close range used by the military police have been extensively shared on social media.

The protest was a response to a bus and metro fare hike at the beginning of June. The new plan increases the fare from R$3,00 to R$3,20 (approximately 10 cents). The government says it’s necessary to keep up with increasing costs. The FFM is calling for public control of the buses and metro, making collective transportation right in a country doomed by increasing inequalities and a rising cost of living.

Ten cents might not seem a lot for Canadians, but protesters argue that the hikes benefit the private collective transportation companies and place an unnecessary financial burden on the poor. Although Brazilians have seen their wages climb steadily over the last decade, the minimum wage is about CAD$350 a month. The financial burden on poor families is aggravated by the city’s severe urban mobility problems. Mass transportation is notorious for being crowded, dangerous, slow and poorly connected. The sprawling metropolis is also known for monster traffic jams and air pollution. These issues resonate with people across the country, as people feel higher wages don’t compensate for long and stressful commutes.

In conjunction with the opening of the Confederation Cup, activists from the Movimento dos Trabalhadores Sem-Teto (Homeless Workers Movement) protested in front of the ManÃ© Garrincha stadium in BrasÃ­lia and MaracanÃ£ in Rio de Janeiro. Like in SÃ£o Paulo, protesters were met with repression from the military police, further fuelling widespread anger. The Brazilian diaspora has also protested in France, Ireland, the United States and even Canada.

Across the political spectrum, there is a widespread sentiment that prices are too high and services remain inadequate. The population is also fed up with corruption culminating with this year’s so-called mensalÃ£o corruption scandal, a vote-buying scheme that has deeply hurt the credibility of the ruling left-of-centre Workers Party. People, however, diverge on tactics and the root causes. The FFM is autonomous, horizontal and is employing direct action tactics. It offers a radical critique of the urban mobility problems that fall in line with social justice principles. A year before the kick-off the very costly 2014 FIFA World Cup, Brazilian urban youth seem determined to put pressure on the government and demand better public services.