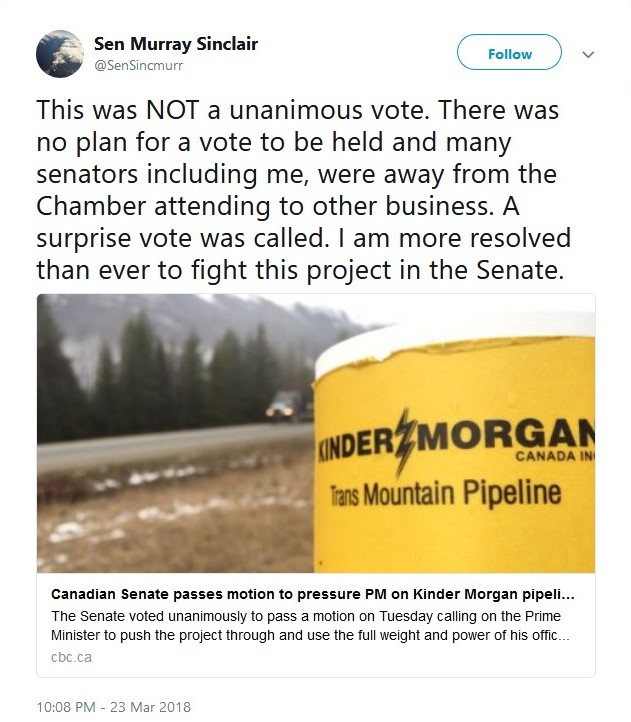 Last week, the CBC and a number of energy industry publications reported on an unanimous vote by the Canadian Senate to express their support for the Kinder Morgan Trans Mountain pipeline, which runs from Alberta to the west coast. A section of the motion (No. 298), moved by Conservative Senator Richard Neufeld of British Columbia, reads:

"That the Senate urge the Prime Minister to bring the full weight and power of his office and that of the Government of Canada to ensure that the Trans Mountain Pipeline Expansion is completed on schedule;"

In an interview with the CBC, Neufeld stated that, "It was eight o'clock at night so not all senators were there, but all the senators knew that I was going to be speaking to it, and so that's why it was unanimous."

What Neufeld and the CBC fail to mention that the Standing Senate Committee on Aboriginal Peoples was away from Ottawa at the time. Senator Lillian Dyck, Chair of that Committee, and herself a member of Gordon First Nation in Saskatchewan, says in an email statement that the Committee "was on a  prairie committee trip concerned with how a new nation to nation relationship ought to look this week, so I was not in Ottawa on March 20th."

The Committee's absence is especially relevant as the Trans Mountain pipeline runs through very large sections of unceded Indigenous land on the west coast, in so-called British Columbia, and several First Nations communities along the route oppose the project, and have not given their consent.

It is not hard to see the irony of the settler-dominated Senate, the supposed beacon of 'sober second thought,' voting unanimously to call on the government to support a project that tramples Indigenous rights while at the same time its own Committee on Aboriginal Peoples was away on a trip discussing "how a new nation to nation relationship ought to look."

But would the vote have gone differently had members of the Committee on Aboriginal Peoples been present? It's hard to say.

When asked, Senator Dyck, the Chair of the Committee, would not state whether she supports or opposes the motion, saying only, "Our committee was away all week and I haven't had time yet to look up the motion."

The Committee has some Indigenous representation, but is settler-dominated. One prominent member, Nancy Greene Raine, famed downhill skier, was a driving force behind establishing the massive Sun Peaks ski resort, which was intensely opposed and resisted by the Secwepemc, the title-holders to the land. Construction of the ski resort was eventually completed, despite Secwepemc opposition. Senator Raine was not on the Committee's field trip but was in the Senate on the day of the unanimous pro-Trans Mountain vote, according to the Hansard (debate transcript).

The day the motion was voted on, Indigenous land and water defenders, along with settlers, were blocking work on the Trans Mountain project, with the RCMP arresting several people.

Senator Murray Sinclair, one of the few Indigenous Senators (Sinclair is Ojibway) though not a member of the Committe on Aboriginal Peoples, made clear via Twitter on March 23rd that he was not present for the vote, and that the Senate was not unanimous in its support of the project. His tweet:

"This was NOT a unanimous vote. There was no plan for a vote to be held and many senators including me, were away from the Chamber attending to other business. A surprise vote was called. I am more resolved than ever to fight this project in the Senate."

Another motion to express the Senate's support for the Trans Mountain pipeline, brought forward by Conservative Senator Doug Black (Alberta), will soon be discussed and voted on in the Senate.