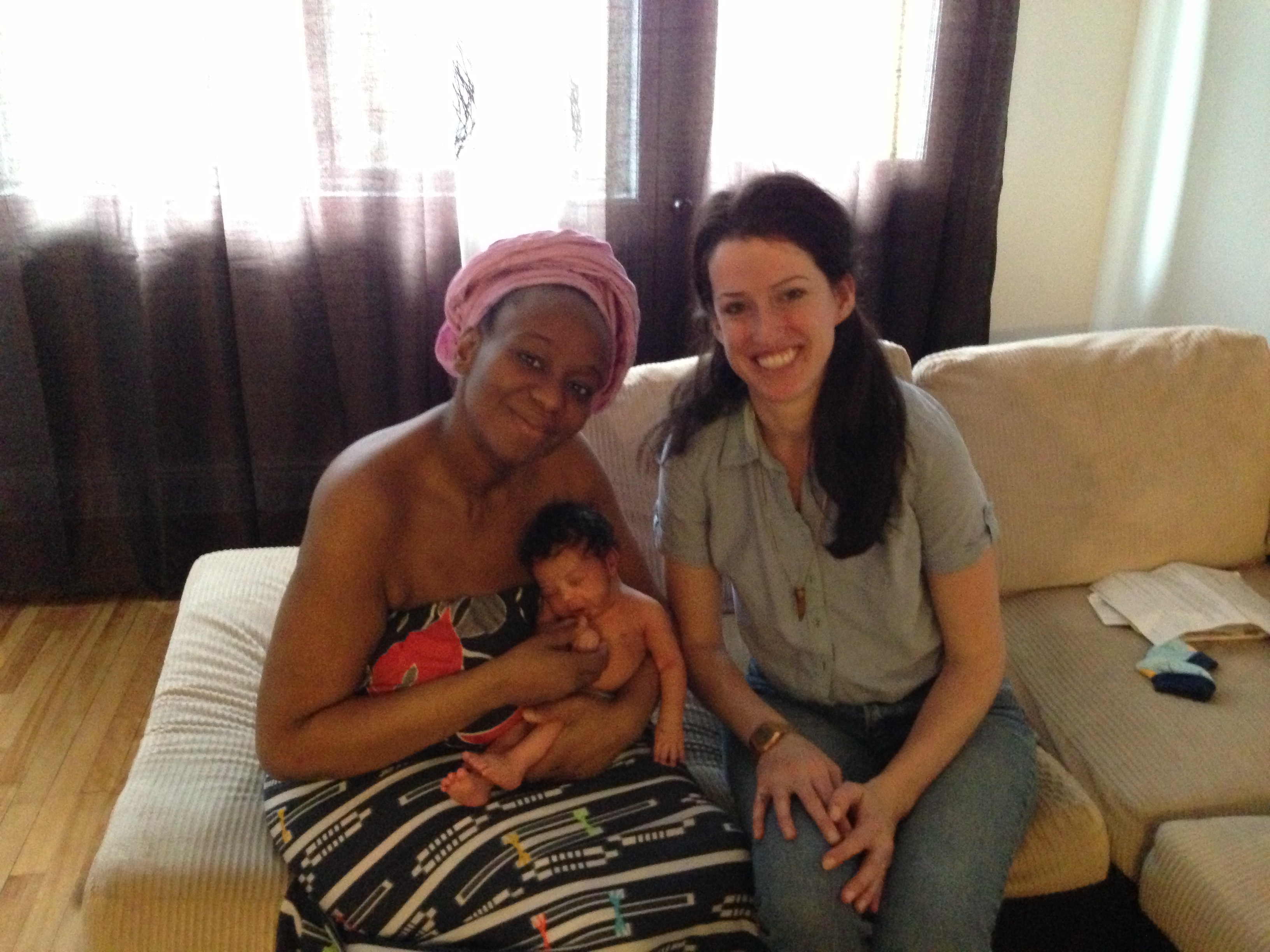 MONTREAL—Violet worked as a secretary and raised her two teenage children by herself. Her husband had been killed two years previously. After his death, Violet moved to another town and “kept quiet” but a year later, her cousin advised her that she was in danger, so she prepared to move from Mexico to Canada and make a refugee claim.

By the time the family arrived in Canada, people from Mexico were no longer eligible for extended health care. Violet was diabetic and needed insulin. Violet’s daughter Julia was 35 weeks pregnant by the time Violet had saved enough money for the flight. They arrived in Canada and stayed with a friend. Violet managed to navigate the process of making a refugee claim and she had enough money saved to get by. She had brought a few months’ supply of insulin with her and she hoped to find some work, but she had not budgeted for winter clothes or her daughter’s needs.

Violet’s daughter found out that she was not eligible for prenatal care or covered for the cost of delivery. She went to a free clinic for one prenatal visit. She was referred to a volunteer doula organization where she was assigned a doula who would come with her to the hospital.

Julia went into labour at noon. Her doula came to her house and told her that because the hospital charged per day from midnight, it was better to wait until then to be admitted. At midnight, they went to the hospital where Julia was offered an epidural, which she accepted. Julia had a baby girl and went home the day after. The hospital stay, plus the charges for the obstetrician and the anaesthesiologist, came to almost $10,000. Violet agreed to pay $300 a month and signed a contract.

When the baby was two months old, Violet learned that she would be deported, along with her son, her daughter and granddaughter. Unfortunately, this kind of story is becoming increasingly familiar in Canada.

On June 30, 2012, changes to health-care coverage for refugees took effect in Canada. Since 1957 the Interim Federal Health Program had provided interim health-care coverage for refugees. This program covered refugees until they were eligible for provincial coverage, or refused refugee claimants until they were deported. Early in 2012, the federal government suggested that the program was at risk. “Too many tax dollars are spent on asylum claimants who are not in need of protection,” said the Minister then responsible, Jason Kenney.

Kenney stated in a press release that the federal government should not “ask Canadians to pay for benefits for protected persons and refugee claimants that are more generous than what they are entitled to themselves.” The suggestion was that there were thousands of fraudulent claims for refugee status (and health care) that were robbing Canadian taxpayers and their health services.

Slashing the Interim Federal Health Program (IFHP) was the government’s next step. Since June 30, 2012, the IFHP provides three types of coverage. According to the Citizenship and Immigration Canada (CIC) website, some refugees are still eligible for full coverage (Government-Assisted Refugees, who are recognized as refugees before their arrival in Canada, or victims of human trafficking). The second category provides restricted health-care coverage for some health conditions, although it is unclear which services are covered and at what moment.

A third category includes refused refugee claimants and refugees from a Designated Country of Origin (DCO) who come from countries that have been deemed safe by the Minister of Immigration. These claimants are only eligible for health care for conditions that “threaten public health and safety” such as tuberculosis, for example, or a violent psychosis. Most European countries are on the DCO list, including Hungary. But this list also includes Mexico, where violence towards women is rampant and from which pregnant women continue to flee.

Pregnant women who fall into the last two categories are only eligible for health care "of an urgent or essential nature." Since prenatal care is ongoing and does not target an acute condition, it is not considered essential.

According to immigration lawyer Mitchell Goldberg, these changes have “had a devastating effect on people.” Statistics are difficult to obtain, as we cannot estimate how many people would have applied for refugee status and obtained medical care if the changes had not been made. But according to Richard Goldman, lawyer with the Committee to Aid Refugees, the number of refugee claims has decreased by 60 per cent since the changes were made. Data from the Canadian Council for Refugees website shows 20,000 refugee claims in 2012, which was reduced to less than 5,000 in the first half of 2013. This means that in 2013, there were 10,000 or more potential refugee claimants who were trying to go to another country, who were in Canada without papers, or who chose to stay in their country, where their lives could be at risk.

These changes in policy concerning refugee claimants has also made it more difficult for any migrant woman seeking prenatal care or care during delivery. The ensuing situation can be described in one word: chaotic. According to Jos Porter, Health Services Coordinator at Head and Hands' community clinic, women are now afraid to go to clinics; no one knows what to charge and no one is sure which case belongs to which category. Because of the confusion about care for refugees, all women without resident status are now being treated with suspicion and aggression at hospitals when they give birth. According to a volunteer who works with this population, women with student visas, work visas, non-status women and women in Canada under the Live-in Caregiver Program are regularly harassed for cash deposits by medical caregivers.

John Docherty, coordinator of RIVO (RÃ©seau d’intervention auprÃ¨s des personnes ayant subi la violence organisÃ©e), an organization that provides support and therapy for survivors of torture and other forms of organized violence, says “there is so much confusion that no one knows who is covered, or how, and doctors are saying that they can’t work with this population because they don’t know if or when or how they will get paid. We’re all pretty discouraged.” Amelie Waddell, a social worker who works with pregnant refugees and refugee claimants, says everybody is depressed because "we are running out of strategies.”

The plight of pregnant women refugees varies from province to province. In Quebec, the province is attempting to fill the gap by providing coverage for those who need it. In Ontario, all women are eligible for midwifery care for free, but refugee women are often not aware of this. Manitoba has also adopted measures to provide coverage for those who have been affected by the cuts. In the rest of Canada, refugees and refugee claimants are turned away from hospitals and clinics if they cannot afford care.

This is “the tip of the iceberg, as women who could be eligible for care are now afraid of disrupting the [refugee] application process,” says Porter. She says there is a lot of uncertainty and fear amongst pregnant women and that there is a huge amount of confusion amongst health-care providers. We are not seeing the women who choose not to go to clinics or who choose to birth at home without adequate care.

RIVO's funding has decreased dramatically due to the IFHP changes, because fewer people are eligible for this type of support. John Docherty explains that this population (which includes pregnant women) have almost no access to appropriate resources any more.

According to Docherty, his organization received a letter from CIC in April 2012 and the changes went through in June. No input from health-care or social service providers was requested between the time the changes were announced and when they took effect. In May 2012, the Wellesley Institute, based in Toronto, designed a Health Equity Impact Assessment that would try to predict the impact of these changes upon the refugee population. They predicted that “the health of refugees would be negatively affected by the changes to the IFHP and that some populations, such as women and children, would be disproportionately impacted.

In October 2013, they concluded that “…unfortunately, evidence is now mounting that these outcomes are occurring.” The report describes several case studies: a refugee claimant, 36 weeks pregnant, was told by her obstetrician that the IFHP would no longer provide insurance for her pregnancy or delivery and that she must bring in $3,000 for her next appointment. A young female refugee claimant was 18 weeks pregnant as a result of a sexual assault while being used as a sexual slave. She had no IFHP coverage to support her during pregnancy.

Grassroots groups across the country that offer volunteer services for pregnant women and their families have tried to step in with some success, but as Docherty says, "the cracks are so big that we don’t know who is falling through them."

Rivka Cymbalist is a writer and birth attendant who is director of Montreal Birth Companions.