This Was Our Playground

This Was Our Playground 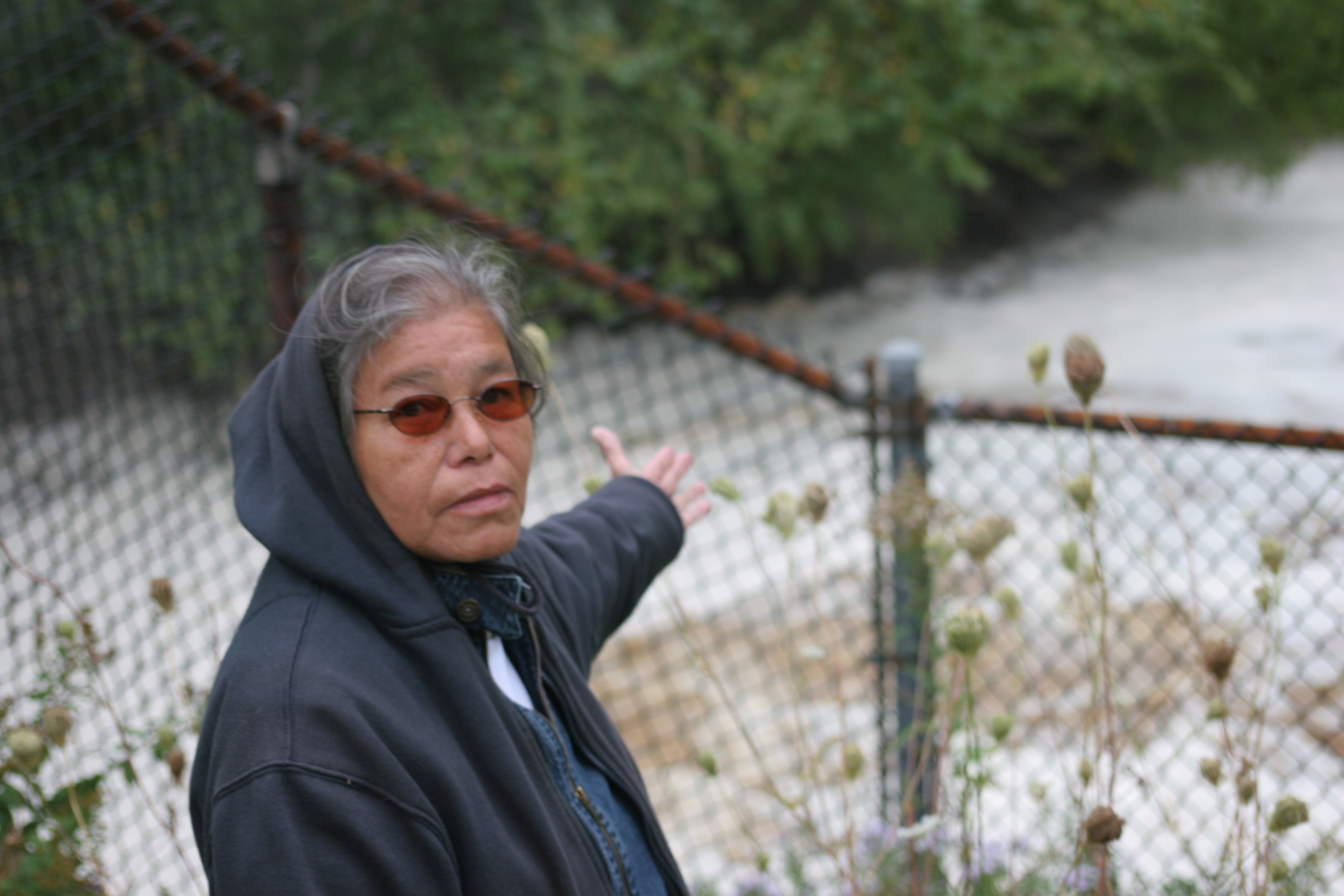 We are looking at a rushing torrent of bubbling, dark brown liquid. It gushes out of the mouth of a 2.5 metre pipe. The flow expels hundreds of litres of effluent waste per second. Foul foam, crust, and spray, lines the banks of a canal that contains the noxious outflow.

The smell from the outflow is overwhelming; an unidentifiable potpourri of chemical soup. This is Boat Harbour, Nova Scotia. The Backwater. We are standing at the tail-end of a pipe that has, for over 40 years, been dumping effluent waste from the Abercrombie Point Pulp and Paper Mill into what was once a natural tidal estuary.

“This was our playground,” says my companion, Maurina Beadle, from Pictou Landing First Nation. Hobbled by a stroke, but still able to clamber around a chain-link fence should the need arise, Beadle has echoed this phrase all day. From the desolation of Moodey's Cove, where a brown tide now washes where swimmers once came to frolic, and shellfish were harvested by the bucket; to the brave little town of Pictou, population 5,000, its own harbour now poisoned and devoid of fish; to the bleakest black of Boat Harbour itself; all of this was a Mig'maw playground for thousands upon thousands of years. Now, the beaches are lined with strange warnings, that sinkholes may appear at any time, and Boat Harbour is decimated.

Something has gone horribly wrong here, and the foul smell that hangs over the entire area is simply the most obvious of indicators. This is a place, and a people, made sick by a mill; sanctioned, subsidized, and approved of, by all levels of government.

In the early 1960s, the Pictou Landing Indian Band was swindled out of Boat Harbour. Representatives of the Band were brought to an in-operational, and hence pristine, effluent treatment site in Saint John, New Brunswick. They were told they could expect the same quality of water at Boat Harbour. And things have never been the same since then.

In 2008, after an extended history of broken promises, backroom dealings, and indemnity agreements signed between the provincial government and the mill, the provincial Conservative government at the time promised to shut down the treatment facility at Boat Harbour. In September of 2010, after effluent-dumping-as-usual continued, the Pictou Landing Indian Band decided to sue the province, as well as current and past owners of the mill, for a variety of charges, mostly related to loss of environmental enjoyment and health-related issues.

It is now 2011, and the effluent continues to flow. As we have reported, a draft “Capacity Building Agreement”, worth $3 million if the band ices its lawsuit for the next 24 months, is now on the table. It would be unfortunate if this offer were accepted, seeing that the poisoned waters of Boat Harbour, the often-leaking effluent-dumping pipe, and the noxious fumes from the mill, do not just affect the Mig'maw of Pictou Landing.

“Pictou is another Lunenberg. Or a Bridgewater. Or any of those nice towns on the South Shore. This fits in that group. But with that thing over there?” says Pictou town councillor Raymond Gregory, motioning to the smoke-belching mill that ruins an otherwise picturesque fall day. “We're never going to realize the full potential of what we have here in Pictou. People have to live with that for some miserable bastard to drive a Mercedes and live in the big castle on the hill. That’s the price people have to pay around here. It’ll make you sick! But even over here at the courthouse, you can’t get the high end people [to pay attention]. The judges, you’d think they’d get in on this, but everybody’s tied in, making a nice, neat, little nest.”

We have also reported that health issues abound in Pictou County. Logic suggests that elevated rates of cancer and respiratory disease amongst its citizens might prompt some action from the provincial government. But, according to Ron Kelly, spokesperson for the Pictou County Watershed Coalition, the only action the current Dexter government is good for is a 'run-around'. Kelly's group wants an epidemiological study done of the community. An epidemiological study would be the first step in identifying the root causes of Pictou County's various health problems. Unfortunately, all Kelly's gotten so far is a bureaucratic-sized head-ache.

Given the breadth and scope of this run-around, whose trail runs cold in classic bureaucratic rhetoric, it is difficult to determine which provincial department, if any, is actually managing the Boat Harbour file. There is certainly no solution on the table for cleaning Boat Harbour, or diverting the effluent from the mill to another suitable location. Unfortunately, there is the constantly-pondered notion of building an effluent-dumping pipe directly into the Northumberland Strait, but seeing as how Pictou Harbour water has promptly given shellfish Leukaemia in lab tests, this doesn't seem like much of a good idea for Nova Scotia's fishing industry.

And while the local health authority says it’s not possible, an epidemiological health study is indeed doable. In 2009, Inka Milewski of the Conservation Council of New Brunswick undertook a epidemiological analysis of her province, and was able to determine cancer levels right down to the community level. Milewski found that occupational exposure to carcinogens was the likely cause of elevated cancer rates in Saint John, and that the 'old standby' excuse of cigarette smoking didn't apply, as rates of smoking in Saint John are below the provincial average. Cancer-related groups applauded the quality of the study.

The Abercrombie mill, for its massive pollution, has received tens of millions of dollars in bail-outs, loans, more loans, and grants, from all levels of government. None of this $100 million+ has ever been earmarked to deal with the issue of Boat Harbour.

In a May of 2010 press release, Northern Pulp notes that it has “reaffirmed its commitment to environmental stewardship” and has signed an agreement with the Pictou Harbour Environment Protection Project. Which sounds nice, until you realize that the president of the PHEPP, Jack Kyte, was former Public Affairs manager for Northern Pulp, and Robert Christie, Executive Director of the PHEPP, who now considers himself an environmentalist, was a former bigwig for Canso Chemicals, and has been tight with mill bosses for decades.

Speaking of mafia, it bears noting that the Northern Pulp mill has in fact been sold to Paper Excellence. Paper Excellence, as we reported, is a shell company of Indonesian conglomerate Asia Pulp and Paper, which is itself the tree-cutting arm of Sinar Mas, a company with well-known ties to former Indonesian dictator Suharto. Greenpeace has launched a successful campaign against Asia Pulp and Paper products, due to its polluting ways, and large North American box stores now refuse to carry its products. Apparently, perhaps for fear of name-brand recognition, Paper Excellence is not changing the name of the Pictou mill. But take note, the Northern Pulp mill is now an Asia Pulp and Paper acquisition, and is now in cahoots with manufacturing a product that is banned by many chain stores.

As for Maurina Beadle, herself involved in a battle with the government for childcare, after her stroke she spent weeks learning to walk again. Her recovery room had a horrible view of the Abercrombie mill. Now 54, having lived with the stench, and sight, and pollution, of the mill for all of her adult life, she maintains her resolve to see it shut.

“Far too many tears have cried over this.” says Beadle. “And far too many years have gone by. You're looking at the younger generation and the babies that are coming up. You don't want them to grow up the same way. You don't want to see them hurt in any way, any more than we were hurt when we were growing up with the paper mill. It doesn't matter which way you look at it, it was a hardship all around. And yes, it would be nice to see it close down, totally. Once and for all.”