Fighting to get police out of Winnipeg schools

Fighting to get police out of Winnipeg schools 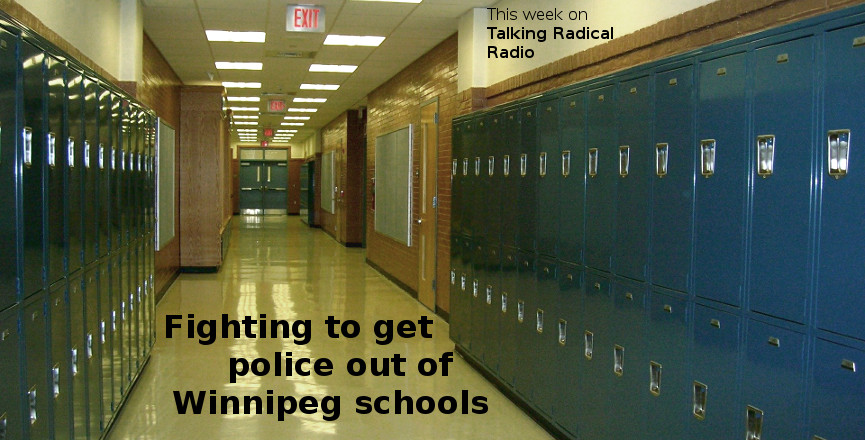 Cam Scott, Daniel Friesen, and Irene Bindi are community organizers and members of Police-Free Schools Winnipeg. Scott Neigh speaks with them about the struggle to get police out of Winnipeg schools.

In general, middle-class white people tend to experience police as a source of safety. But lots of people not in that category, particularly Black and Indigenous people, tend to be targeted by police for surveillance, harassment, arrest, and violence, and so experience police as a source of danger and harm. Ending police involvement in particular spaces, activities, or mandates is one practical way of reducing the number and kinds of encounters with police that people who experience them as dangerous have to navigate. It can also free up resources that can then be invested in a more genuine and equitable vision of safety, or really in whatever it is that communities need.

Like pretty much everywhere, in Winnipeg there is no shortage of critical voices pointing out the many harms that the police do to communities. In 2020, police killings of Indigenous people have in partciular been making headlines in Winnipeg, especially since they killed three Indigenous people in three separate incidents in ten days back in the spring, including a 16 year-old girl. This spring and summer saw significant mobilizations in the city as part of the continent-wide uprising against anti-Black racism and police brutality, including an online petition with over 115,000 signatures calling for, among other things, defunding the Winnipeg police.

Earlier this year, a group comprised initially mostly of teachers, but also some parents and community members, got together to start strategizing about how to get police – often called "school resources officers" or SROs – out of Winnipeg schools. People in communities across the country have been increasingly concerned at the risk posed by police in schools and there have been campaigns to get them out in a number of cities, including successful ones in Toronto in 2017 and in Hamilton, Ontario, earlier in 2020.

The group started out by collecting the stories of people's experiences with police in Winnipeg schools. What they heard fell into two broad categories: Some people talked about acute incidents in which police mistreated students, and their presence created or exacerbated conflict. This sometimes transformed a simple question of student behaviour into an encounter with the criminal legal system, sometimes including violence by police and charges against students. Encounters like that are a key element of what gets called the school-to-prison pipeline for Black and Indigenous youth.

And the other main category of stories talked about the less visible but just as devastating way that police presence changed the experience of school for some students and staff, and made them feel less safe and actively uncomfortable, often because of prior trauma from police. Some people dealt with this by avoiding the officer, avoiding particular spaces, even avoiding school in its entirety. In effect, police presence contributed to pushing Indigenous, Black, and other marginalized youth out of school.

This fall, the contract between the local school divisions and the City of Winnipeg that put police into schools was up for renewal. The group mounted a campaign to stop the city from renewing it. They mobilized the stories they had collected, testimony by people who felt able to talk on the record, and a range of lobbying and social media-based pressure tactics to demand that the renewal be delayed and a report be prepared on other cities that had ended their SRO programs. Though they got support from a number of councillors, they were unsuccessful.

Now, the group is focused on the city's school divisions. They are demanding that each division do an equity-based review of its SRO program. "Equity-based" means that the review would specifically seek-out and centre the voices of people in groups likely to experience harmful effects from police presence. Such a report was a key step in the decision to end the SRO program in Toronto, and the group is confident that this would also be true in Winnipeg. While there has been vehement opposition from some city councillors and school trustees, many trustees in particular seem open to the idea of reviewing the program, and members of Police-Free Schools Winnipeg are hopeful.