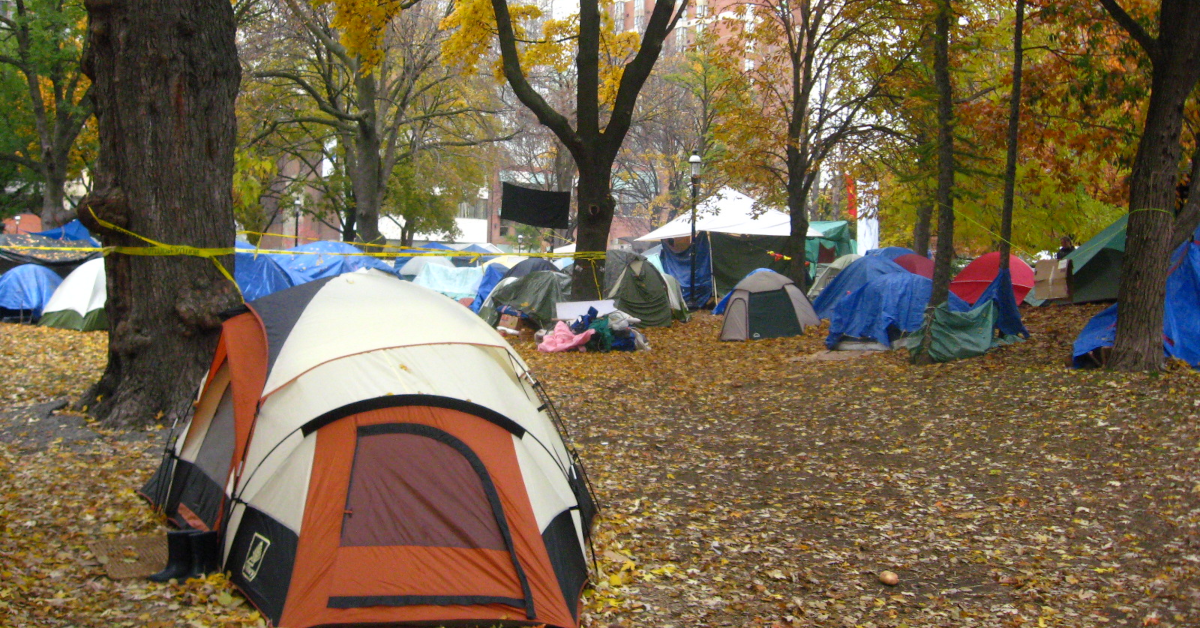 Vicky Levack is a human rights advocate based in Halifax whose work focuses on disability and on gender, with a particular interest in housing issues. These days, she is active with the PADS Community Network, a new grassroots formation in Halifax fighting – as their acronym summarizes – for permanent, accessible, dignified, and safer housing for all. Scott Neigh interviews her about housing and homelessness in Halifax in the context of COVID-19, and about the role of the PADS Community Network in supporting encampments of unhoused people in the city.

The basic features of Canada’s ongoing housing and homelessness crisis have been pretty much the same since the mayors of the country’s ten largest cities declared homelessness a national disaster back in 1998. Wages at the lower end of the labour market and social assistance payments are way too low. Private-market rental housing is mostly not affordable (and is often terrible quality when it is). And there isn’t nearly enough rent-geared-to-income social housing to meet the need, and governments have not put serious money into building more in decades. There are also all kinds of questions around accessibility and supports that, again, Canada’s neoliberal governments give a fraction of the required resources. And far too often when pushed to do something, said governments treat the problem as purely about a lack of supply in the private rental market, with no recognition that whatever measures they take to incentivize the construction of new for-profit rental housing, incomes will still be too low, rents will still be too high, and lots of people will still be homeless.

In Nova Scotia, social assistance and disability rates for a single person are $620/month and $855/month, respectively. Yet the average rent in Halifax for a bachelor apartment is $865, and a one-bedroom is $1,016. If you consider apartments that are actually on the market and available to be rented, the numbers are even higher, with a one-bedroom averaging more than $1,500. A living wage in Halifax, which includes being able to afford housing, would be at least $21.80 an hour, but the minimum hourly wage in the province is only $12.95. About a quarter of tenant households in the city live in housing that they can’t really afford. From 1993 until late 2020, Nova Scotia had no rent control.

Since the onset of the COVID-19 pandemic, despite certain kinds of emergency supports from governments, plenty of people are worse off than they were. In Halifax, rents have gone up significantly at the same time – by as much as 20% for a one-bedroom unit between January 2020 and January 2021. And as for how that has translated into homelessness, Levack said, “It’s astronomical now. It’s getting worse and worse.”

Even before the pandemic many unhoused people had a lot of concerns about emergency shelters being full, unpleasant, and unsafe. That, too, has worsened with COVID. In many cities, including Halifax, a subset of people without a permanent place to live have decided that it is safer avoid the shelter system and to instead set up their own encampments in parks and on other public land. A group called Halifax Mutual Aid was offering support by, among other things, building small insulated shelters for encampment residents.

And as in many other cities, in Halifax these efforts by homeless people to keep themselves safe have been vigorously opposed by some business owners, politicians, and middle-class residents. This came to a head on August 18, when Halifax Regional Police evicted people from encampments in parks, and confiscated tents and other shelters. Police tried to restrict journalists in covering the actions, used pepper spray on protesters (including on a ten year-old child), and made numerous arrests. Many encampment residents reported they were not offered any, let alone suitable, alternative housing. Levack said, “Many of the officers acted like bullies and thugs, and not like protectors. They’re supposed to protect and serve. Well, I think the only people they’re protecting now – and they made that very clear with their actions on the 18th – the only people they’re protecting is the wealthy. They’re not there to protect the little guy.”

The PADS Community Network formed pretty much in direct response to the events of August 18. Because so many people who had been evicted from parks had nowhere else to go, many ended up re-settling in other parks. The primary work of PADS is supporting encampments. They help obtain supplies, and activists stay on-site to, at the very least, witness, and perhaps prevent, future police attempts to harass or evict encampment residents. Being so new, they are also hard at work establishing themselves as an organization. The community network is fully aware that encampments are an emergency measure only, and they have also been active in putting pressure on governments to both make improvements to the local emergency shelter system and to find real solutions – to do what needs to be done to make sure that everyone who is currently homeless in Halifax gets permanent, accessible, dignified, safer housing.

Levack’s advice to people in Halifax is clear: “Instead of blaming the people who are suffering, blame the government that is doing nothing to help them. Punch up, not down.” She continued, “I look around me, and I think we’re, we’re part of the G7 – Canada is, right? So how can we be one of the most affluent countries in the world, and still have people living like this? It just disgusts me.”