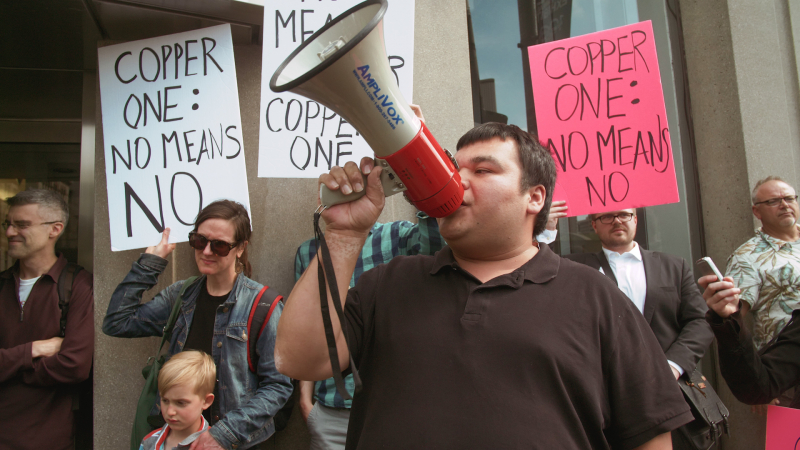 If Canadians want to understand why some First Nations are sitting out the Canada 150 celebrations, they need look no further than to 15 community members who took an eight-hour drive from Barriere Lake in Quebec to Toronto on Thursday.

The Algonquins attended the Annual General Meeting (AGM) of the Copper One mining company to let them know there will be no mining on their territory. They have repeatedly, unequivocally, over the course of six years, notified Copper One that they intend to protect the headwaters of the powerful Ottawa and Gatineau Rivers and the effected lifeworlds of ecosystems and communities downstream.

They were not even permitted to read a statement at the AGM: instead they were bullied, assaulted, threatened with arrest by police, accused of trespassing, and met with a thick line of “legal counsel” and security blocking their entrance into the meeting. The wonder of it all was the spirit of determination that remained undiminished and even galvanized by Barriere Lake in the face of the junior mining company’s obviously threatened response.

Barriere Lake have witnessed the anguish of other communities whose lands have been effected by mining, including the Secwepemc since the Mount Polley disaster who witnessed the largest tailing pond spill in Canadian history poison hundreds of river systems in their interior BC territory a few years ago.

Prime Minister Trudeau rode a wave of Indigenous support into power, promising for one thing, to implement the United Nation Declaration of Indigenous Peoples Rights (UNDRIP), to which Canada is a signatory. UNDRIP protects Indigenous peoples’ right to free, prior, and informed consent. But these promises have unspooled in a familiar way.

Confederation was a non-event for Indigenous people. They were not in the room when it was signed and they were not invited into the discussion. They are only included in brief mention under the federal head of power in the jurisdictional divisions of power between the federal and provincial governments.

But Canada’s assertion of sovereignty did not extinguish Indigenous peoples’ responsibility to the lands they had been occupying for thousands of years, nor their structures of governance, or their decision making authority that did not derive from a foreign power, but from the responsibilities passed down for generations from their ancestors.

The Algonquins have an encyclopedic knowledge of their territory. Their forest management includes food, beverage, medicine, utility, craftwork, ritual, ceremony and commercial uses, and involves the use of mammals, birds, insects, inanimate objects, fish, flora, and fauna. For example, they know which trees are good for snowshoes and baskets, which fish make the best glue, which insects indicate the best time to hunt sturgeon along the lakeshore. At least 104 plants have been used by the Algonquins for medicine that treats everything from kidney and urinary ailments, including medicines specifically for women to deal with menstruation and childbirth, as well as for treating cancer and diabetes. It is this knowledge, the Algonquins maintain, and their protection of it, that is the source of their jurisdiction.

In 1991, Barriere Lake signed an agreement with Canada and Quebec to co-manage resource use on their lands. Despite being lauded by the United Nations as a trailblazing achievement, both colonial governments failed to honour it. Modeled after a three-figure wampum exchanged between the Algonquins, the French, and the English around 1760, the Trilateral Agreement turned out to be another link in a chain of dishonoured agreements.

Barriere Lake’s vision of co-existence offers a solution to the problem of conflicting Indigenous and Canadian laws. But instead, the governments used every trick in the book to malign the community and squirm out of their obligations. The worst of this treatment involved the destruction of Barriere Lake’s customary governance system in 2010 by ministerial authority of an archaic clause of the Indian Act that had rarely been exercised in almost one hundred years.

On July 1, what will Canadians be celebrating? To live here proudly, we need to respect the Indigenous governance structures that are tied profoudly to the future viability of these lands.

Shiri Pasternak is assistant professor in the School for the Study of Canada at Trent University, and the author of Grounded Authority: The Algonquins of Barriere Lake against the State.

Video by Micheal Toledano, with footage from Trinity Nonoshkasi Matchewan. No commercial use without consent.