‘I was afraid I was going to kill somebody’: Former CO speaks out against culture of violence, neglect in Saskatchewan jails

‘I was afraid I was going to kill somebody’: Former CO speaks out against culture of violence, neglect in Saskatchewan jails

Chronic overcrowding, underfunding, lack of basic nutrition are only part of wider systemic problem
by
Gabbriel Schivone and Abby Stadnyk 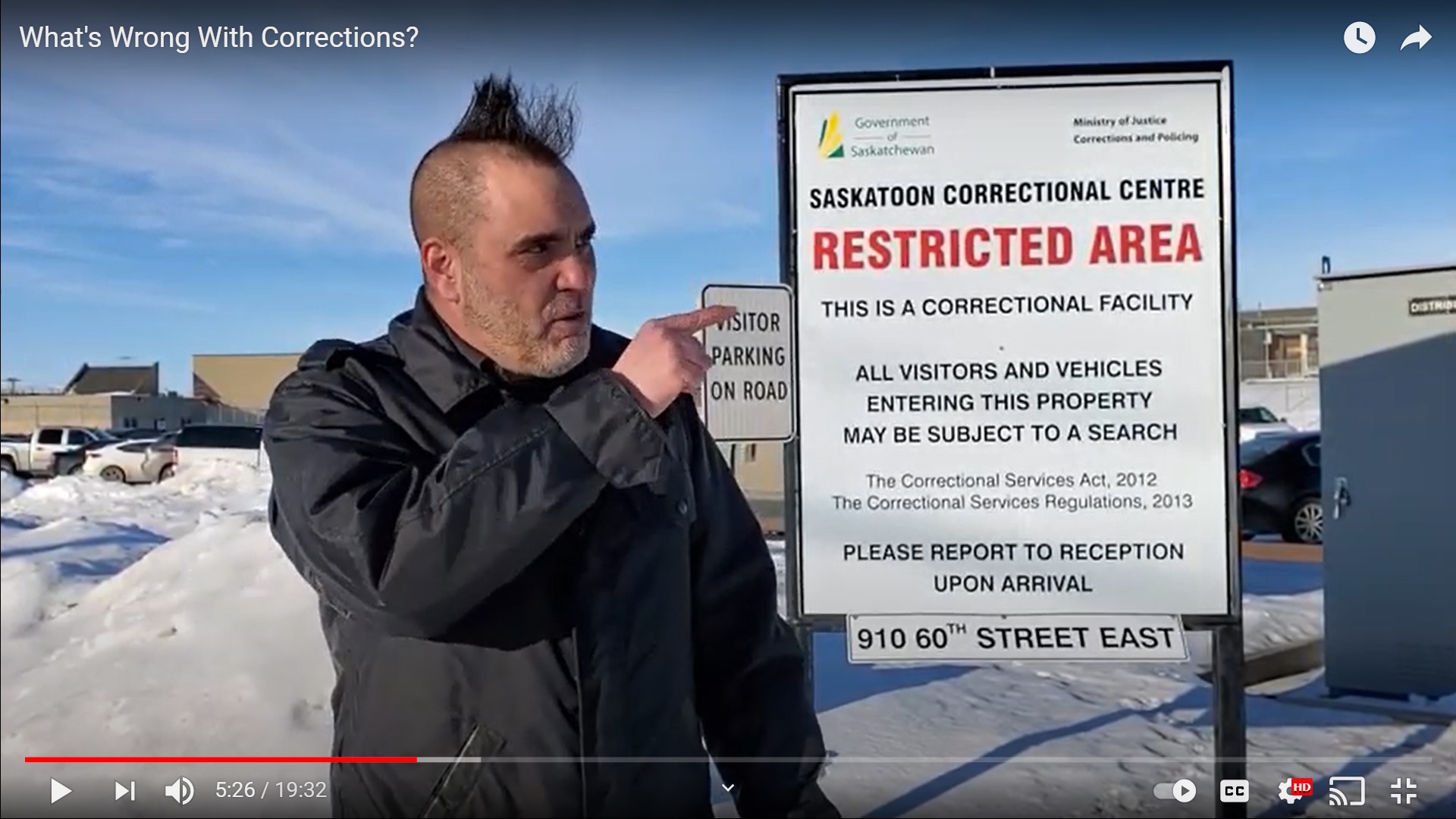 A former Saskatoon correctional prison guard is breaking ranks to speak out against the injustices he says he witnessed inside the provincial prison system during his 22-year tenure.

Through his YouTube channel, Making Corrections, correctional officer Chris Katzell takes aim at the Saskatchewan government of Premier Scott Moe for maintaining the deplorable conditions in that province’s jails. His videos help shed light on a dysfunctional correctional system that perpetuates problems such as chronic overcrowding, underfunding, lack of basic nutrition and a general apathy towards the physical and mental health of staff and prisoners.

Though Katzell says he is not familiar with the phrase “prison abolition,” his criticism of the penal system and advocacy for a systemic overhaul is very much in line with the modern prison abolitionist movement that has gained more ground, especially in public discourse, in the last two decades. It’s important to note, however, that the abolitionist movement dates back at least to the 1970s, following prison uprisings in Attica, NY in 1971 and Walpole Prison (now the Massachusetts Correctional Institution—Cedar Junction) in 1973, and the disastrous “war on drugs” that began in the 1980s and which has done nothing more than turn the U.S. into the country with the largest prison population in the world.

He also quickly identified with the term, once he heard it. The idea of abolishing the prison industrial complex as we know it, he said in an interview with the Media Co-op, “sounds like the right direction.”  Like building a new world in the shell of the old, he says he believes part of abolition should be to “evolve the system that’s already there and you elevate it.”

Katzell’s critiques come on the heels of developing troublesome situations at Saskatchewan jails including recent COVID-19 outbreaks at both the Saskatoon and the Regina Correctional Centres, as well as prisoner hunger strikes and community actions in support of Saskatchewan prisoners. In one post titled “Ex-CO Challenges Top Sask Party Officials - Where Is Your Integrity?” he blasts Saskatchewan Minister of Corrections, Public Policy and Policing Christine Tell for mismanaging the government’s COVID-19 response by failing to implement appropriate health and safety measures to protect staff and prisoners

However, he stresses, these issues are nothing new, as they stem from the government’s resistance to systemic change like providing appropriate funding for effective programs addressing mental health. COVID-19 has merely exacerbated conditions that are, in fact, endemic to Saskatchewan jails

It “just happens to be the current issue,” Katzell points out in one of his videos, referring to the Coronavirus. “The problems are the same as they’ve always been.”

In another video, Katzell takes aim at the politicians who allow these conditions to continue. First, he turns his attention to Minister Tell.

“You have a background as a psych nurse,” he reminds her. “You should know exactly what goes on in this kind of place…. You built yourself up to being a sergeant with the police. You should know how to handle corrections

His most scathing critique is reserved for Premier Moe, however, who in 1997 killed a person in an automobile crash and received only a “ticket for driving without due care and attention,” according to a CBC report. Katzell reminds the Premier that, if not for his “privilege,” he could have “ended up on the wrong side of the bars

He concludes the video by demanding the premier take responsibility for the state of Saskatchewan corrections.

“Scott, obviously you can’t handle time in jail…because you did whatever you could to dodge your own accountability,” he says. “Well, you know what? It’s too late. There’s no dodging anymore

A Culture of Violence

Like Katzell, journalist Shane Bauer also has much to say about the culture of violence and abuse that characterizes the prison system. From 2014-2015, Bauer went undercover as a prison guard at the Winn Correctional Center in Winnfield, La., an experience out of which he wrote the book “American Prison

In an interview with Perilous Chronicle earlier this year, Bauer observed that prison staff “tended to have very little sympathy with prisoners."

"I think that maybe starts as a survival tactic, or just a way to kind of get through the job," he said during the summer 2020 interview. "And then they end up becoming cruel, or at least indifferent.”

“The people who weren’t like that,” he continued, “would just end up leaving.”

Speaking to the Media Co-op, Katzell directly attests to this as he recalls various examples of violence and bad behavior that he and other guards perpetrated against inmates and even colleagues. Although he is technically still a corrections officer for contractual reasons, after he repeatedly advocated about his deteriorating mental health, ultimately stating that the prison system had turned him into a danger to himself and to inmates and colleagues, the prison administration finally removed him from his job, drastically demoting his pay.

Once he reclaimed his humanity, Katzell explained during the interview with the Media Co-op, he began calling for compassion toward everyone involved in the system.

“If you still don’t understand...that justice demands compassion and mercy and grace, I don’t know what to tell you,” he says.

As an example, he cites recent derogatory comments directed at prisoners who led an uprising at the Prince Albert Correctional Centre. While some members of the public, he says in a video, have blamed prisoners – and even staff – for the event, he insists the responsibility “falls solely on the government and their policy and how they handle Corrections

“[T]he government does not care about the inmates,” he says

He also draws attention to the hyper-incarceration of Indigenous people, who make up 75 percent of prisoners in Saskatchewan jails but only 16 percent of the overall provincial population.

“We owe [Indigenous people] a lot more, to make sure there’s a change,” he says.

Whistleblowers in the prison system are extremely rare, but they do exist, just as there are dissidents in other areas of law enforcement. More common, however, is advocacy and resistance by prisoners themselves. Perilous Chronicle’s November 2020 report documented more than 100 instances of prisoner resistance in North America in the first 90 days of COVID-19, which hit prisons particularly hard.

Katzell is committed to growing such efforts, however small they may be.

Katzell, born and raised in Saskatchewan to working-class parents, rambled through a series of thankless jobs serving at gas stations and fast food restaurants in his early 20s. Then, the summer he spent as a youth counselor showed him his calling was to work with children, so he eventually attended a two-year program at a polytechnic trade school specializing in youth care. His studies involved placements in a group home, an addiction centre, a school and a jail. After graduating, he found that work as a prison guard, which came with benefits and a union, was a powerful incentive, and his taller-than-average, bulky frame was suited for the position

He first worked in youth detention until 2013, when he transferred to adult incarceration work -- by which time his life had gone into a tailspin from the emotional and mental strife of the job. After having worked in corrections for 22 years, Katzell says, he finally “escaped” the system in 2016, but not without suffering from PTSD, which he says is commonplace among guards

According to the Prairies region for the Union of Canadian Correctional Officers citing an internal Correctional Service of Canada (CSC) report, “correctional officers in male medium-security prisons have a 36 percent PTSD rate,” a CBC report states.

"[That PTSD] rate is higher than any other workplace we know of out there right now," local Union of Canadian Correctional Officers president James Bloomfield is quoted saying. "It is very high, compared to the private sector

In his first video, posted on Christmas Eve 2020, Katzell stands at the front entrance of the jail, staring intently into the camera as he discusses the way the prison environment perpetuates violence

“I had to leave” Katzell says in the video, his hair styled upright into a tall spike down the middle of his head, “because I was afraid I was going to kill somebody

He says no one listened to his health concerns – neither the Saskatchewan Government Employees’ Union (SGEU), nor the Workers’ Compensation Board (WCB), or the Ministry of Corrections. According to him, they were more concerned with getting him “back to work” than with his well-being

In a recent interview with the Media Co-op and Perilous Chronicle, Katzell explains he was transferred to a social services desk job at an income assistance office, but his deteriorating mental health, still not fully acknowledged, kept flaring up. He was consequently labeled too much of a risk to work and lost his psychological/medical coverage. Since then, he has been surviving on meager disability coverage

By mid-December 2020, he says, the union stopped helping him.

At that point, after exhausting all the internal channels for redress, he decided to blow the whistle because, as he says in one of his YouTube videos, “I’ve already had everything taken away.... They can’t take any more

In 2017, he faced and overcame suicidal ideations. It was that moment of ultimate loss that gave him the strength to start fighting back

Katzell’s videos are not only a way for him to air his own grievances, however. His goal is to illuminate the shared concerns of staff who, he says, are muzzled, unable to voice their views about the system without censure, ridicule, or even being fired

“If you have any…stories that you want to share, especially evidence-backed,” he addresses fellow staff in one of his videos, “get ahold of me and let’s see what changes we can make together

“As employees, we’re not allowed to speak out about what goes on, because it would embarrass the government,” he says in the interview. “So we could lose our job and there wouldn’t be anything that the union could do about it. And I’ve just seen too many under-staff go through similar circumstances”-- co-workers who want to speak out “and just can’t

As for the other prison guards and workers who Katzell is appealing to join him in speaking out, he spares no illusions of the obstacles that will be in their way, because “the more you fight,” he says, “the more you look like a problem – especially when you’re fighting something systemic.”

Still, since he posted the videos, he says he has been moved by the former inmates, advocates and corrections workers outside his area who have reached out to thank him and share their stories.

While the intense video-making process has drained his strength, Katzell says he is nevertheless committed to making more in the hopes of helping others find their voice and join him.

This article is a co-publication between The Media Co-op and Perilous Chronicle.

Gabbriel Schivone is a writer from Tucson, AZ, and founder of the Longshot newsletter of fiction and journalism.

Abby Stadnyk is a contributing writer to Perilous Chronicle based in Edmonton, AB, Canada. Follow her on Twitter: @AbbyStadnyk