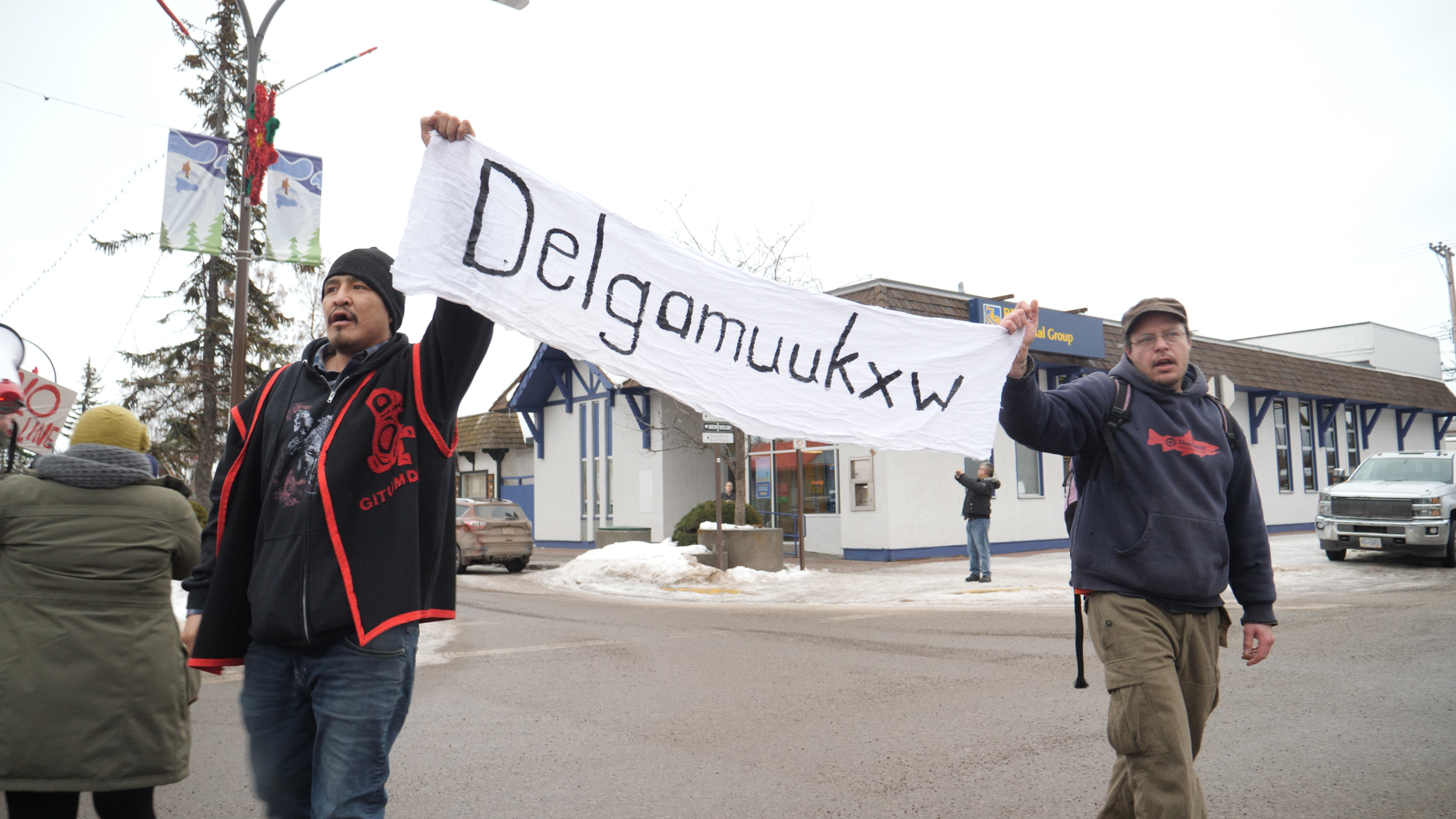 Ten years ago, the Unist'ot'en, the C’ihlts’ehkhyu / Big Frog Clan built a cabin at Talbits Kwah at Gosnell Creek and Wedzin Kwah (Morice River) to defend their territory from seven proposed pipelines. Today, that cabin is also a land-based wellness centre for the Wet’suwet’en people. ‘Heal the Land, Heal the People’ is a slogan found on the Unist’ot’en Camp’s website.

Last October, when the TransCanada-owned Coastal GasLink pipeline project got its final approval, the Gidumt’en Checkpoint was announced in the Wet’suwet’en feast hall with the support of all the chiefs present, as per Anuc niwh’it’en (Wet’suwet’en law). At that moment, all five clans of the Wet’suwet’en formally opposed all pipeline proposals. The Gidumt’en Checkpoint, which is 20 km from the Unist'ot'en camp, acts as the first line of defense against attempts to enter the territory.

In December, TransCanada was granted an interim injunction by BC judge Marguerite Church to be able to cross the bridge to access Unist'ot'en territory. Then on Jan. 7, 2019, the RCMP, and judging by their combat-style fatigues and automatic weapons, possibly INSET, an Integrated National Security Enforcement Team (the RCMP’s anti-terrorism tactical unit), arrived at the Gidumt’en Checkpoint. Their convoy was to escort pipeline workers across the bridge onto Unist’ot’en territory to start the preliminary work on the Coastal GasLink pipeline, which intends to transport natural gas from Dawson Creek to the proposed LNG Canada facility near Kitimat The RCMP let the workers through while blocking anyone else from entering, including journalists. Though the RCMP denies having anything to do with it, at the time, internet and cell service suddenly stopped working at Unist'ot'en, all effective blocks to limiting or preventing communication from the Wet’suwet’en.

Freda Huson the spokesperson of Unist’ot’en and her partner Dini Ze Smogelgem, the Hereditary Chief of the Laksamshu Clan have worked tirelessly on protecting Unist’ot’en from pipelines since the start, 10 years ago. The mother of hereditary chief Dini Ze Smogelgem of the Laksamshu Clan had passed away three days before the raid, and the timing of the RCMP raid was probably planned for when everyone at the Unist'ot'en camp was in mourning, in hopes that they were vulnerable.

For the time being, the Unist’ot’en are allowing TransCanada workers to cross their bridge. But demonstrations and actions across Canada and around the world in support of the Wet’suwet’en - which has put the RCMP directly in the spotlight – continue. Without strong public support,   would the RCMP have continued to block the flow of people entering Gidumt'en and Unist'ot'en? Maybe there would be no updates from Unist'ot'en, and maybe TransCanada would have had more room to bend a rule or two and do work that they haven't received government approval to do.

By the end of January, a court date will likely be set for the injunction application to be heard.  Because of Delgamuukw, the landmark 1997 decision recognizing that Aboriginal Title is not extinguished in the Wet’suwet’en and Gitxsan territories, the injunction may not be granted. The Delgamuukw decision has never been implemented by Canada, and this case may force the issue in the courts. TransCanada may try to complete as much work as it can before the court hearing.

Canada continues to attempt to cloud the general public’s already limited understanding of  Unist’ot’en by publicizing that INAC-created (Indigenous and Northern Affairs Canada) band councils and First Nations along the pipeline route have all given their support for this project. While this is true, it's also true that First Nations and band councils were created by the Canadian government through the illegal Indian Act of 1876. There are pre-confederation laws, early Canadian laws, as well as the Canadian Constitution which all affirm Aboriginal Title, which is a collective right to the use of and jurisdiction over a group's ancestral territories. (See an in-depth look at these laws.)

Sovereignty, or any recognized Indigenous right to traditional land, even in the most limited capacity, is expensive for the government and a buzz-kill for industry. Natives who are living on and protecting their land and water, and who are doing so outside of any colonial Canadian system, are labeled “splinter groups”, and “aboriginal extremists”. Canada has been preparing Canadian law-enforcement to identify, discredit, isolate, criminalize and remove these people out of the way from getting in the way of any profits to be made.

Since the 1990 Oka Crisis, when the Mohawk Nation in Kahnasatake successfully stopped a golf course expansion that threatened to desecrate their burial grounds, Canada has taken steps to prevent it from happening again.The Canadian military attacked the Kahnasatake blockade with the intent to kill anyone who tried to maintain it. The Mohawks defended themselves well, but also got tremendous support from all over Canada and the world. That support put pressure on Canada and helped the Mohawks achieve their victory.

In 1995, when Secwepemc people, who became known as the Ts'peten Defenders (Gustafsen Lake), ignored a trespassing notice and continued to stay on their territory, they had to defend themselves from the largest paramilitary operation in BC’s history. There wasn’t the same widespread support as there was during the Oka Crisis. Why not? Maybe because of the RCMP’s attempts to isolate the Ts'peten Defenders. A video recording of RCMP officers planning what they called “a media-smear campaign” was publicized in court, and the mainstream media reporting of “The Gustafsen Lake Standoff” was incredibly racist - rationalizing and downplaying the high level of state violence.

Since 9/11 (Sept 11, 2001), Canada has been actively taking steps to label and treat Native groups as terrorist organizations. First Nations and bands are monitored, but the federal government specifically attempts to discredit “splinter groups” of “aboriginal extremists” that operate outside elected INAC band and tribal councils and attempt to consolidate perceived power within these federally-funded organizations.

By 2003, the Integrated National Security Enforcement Teams (INSET) were created and stationed in all major cities. Canada showed its commitment to protecting the oil and gas industry by setting up an INSET in Calgary in 2012. The sudden jump of RCMP funding into INSET in 2013-14 can be explained by the widespread and peaceful Idle No More protests, followed by the victorious Mi’kmaq struggle against fracking exploration on the Elsipogtog reserve in New Brunswick. Forty people were violently arrested by RCMP and possibly INSET at a blockade, and there were nationwide protests held to support the Mi’kmaq. Ultimately they won a province-wide moratorium on fracking in New Brunswick.

The RCMP’s Project Sitka was publicized in March 2016. This was a nation-wide project where various RCMP detachments collected extensive intelligence on Indigenous people across Canada from 2014-2015. Eighty-nine people were identified and their personal information was organized into profiles that were then shared across Canada with other law enforcement agencies. These were people who attended Missing and Murdered Indigenous Women marches, Idle No More rallies, land claims settlements, and who organized opposition to resource extraction projects. They gathered information from personal records and social media, then profiles were created and made available to front-line officers, analysts, and other law enforcement agencies through two police databases: the RCMP’s Automated Intelligence Information System, and the Police Reporting and Occurrence System. The National Post reported also that the RCMP refused to answer whether the people who were being monitored had committed any crime.

In the present, the federal government is currently getting served their nightmare, again. The Hereditary Clans of the Wet'suwet'en Nation have vast support in their efforts to protect their territory from pipelines. Large numbers of the general public are standing with the Wet'suwet'en, people everywhere and are speaking against the violations the RCMP have made against the Gidumt'en. More people care about the safety of Native people, clean land and clean water over “a handful of jobs” and the development of the LNG industry.

Canada claims that fracking for natural gas is a sure thing, but it is harmful to watersheds, ecosystems, soil health and there are many human health concerns. And is it really the great market the government makes it out to be? How can it be a valid motivation for their actions in the distant and recent past against indigenous nations?

For the Wet’suwet’en clans, chances are high that they will stop the injunction in the upcoming court case, and the Coastal GasLink project will be stopped on their territory. There is also another separate challenge is being brought forward. This pipeline project did not go through a federal review process, because the actual pipeline is limited to BC. However, it will conjoin to infrastructure in Alberta, making it inter-provincial, and arguably should be federally regulated. The National Energy Board has agreed to consider a jurisdictional challenge of the Coastal GasLink pipeline’s approval. This was filed by Smithers-based environmental consultant, Michael Sawyer. Pushing for a federal review is another tactic that can cause delays in this project, and one which could cost the investors.

Despite what happens, it’s important that the support in solidarity with the Wet'suwet'en be ongoing, wide-spread, and visible in order to help maintain their safety. The possibility that TransCanada will try to complete as much work as possible, and that the courts will drag their feet with the hearing is real, so now is the time to pressure the investors and the federal government.

What can we do? Solidarity actions, court support, etc.

Keep yourself informed on the updates from Unist’ot’en, as they are publishing their own press releases regularly. Their website is https://unistoten.camp/ . There is information there on how to make donations to legal funds, monthly donations, and one time donations. Wet’suwet’en Access Point on Gitdumt’en territory. The Unist’ot’en and their allies will be facing mounting legal fees in order to protect the territory. Legal funds for the Unist’ot’en land defenders are absolutely crucial and a main priority at this time. Click here to donate to the Unist’ot’en Camp Legal Fund.

Please note: Cheques must be made out to “Tse Wedi Eltlh” NOT Unist’ot’en Camp. Thank you!

If you are nowhere near Unist'ot'en and don’t have funds, but want your actions to be effective, this pipeline is part of the broader project LNG Canada, whose major funders are Shell, PETRONAS, Petro China, Mitsubishi, and KOGAS. If there aren't any offices in your region, Shell and Mitsubishi have businesses everywhere that can be protested.

Demand that the Coastal GasLink Project be halted, and go through a federal review process. The delays may be so costly that investors will back away from the project.

Demand a province-wide moratorium on LNG related projects in BC. These projects are threatening sovereign territories across Northern BC, and the Wet’suwet’en are not alone in fighting these projects. Fracking depletes fresh water and introduces hundreds of toxic chemicals into the ground, which leaches into the underground water system. The province is giving tax breaks to these projects, which ultimately cost the tax-payers. Demand a moratorium!