Big Toronto Money About to Get Garbage Contract Worth Millions 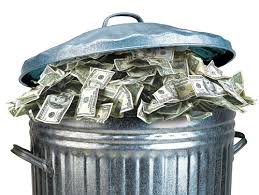 The pillaging of Toronto continues.

As profiled last week in our look at the forces that run Toronto, one of the ways that politicians are able to pay back big money supporters is to ensure that big City contracts end up in the right hands.

“There are few contracts controlled by the City,” says a source who works in a key City department. “Garbage, construction/roads…cleaning was on the block but it falls into different buckets and they’ve privatized a bunch of what [CUPE] local 416 did.”

Last week, the Mayor continued his push to privatize garbage.  The process though, laid out in a series of Tweets by Toronto Star reporter Jennfier Pagliaro, lays bare how sketchy the decision making has been.

1. Tory ran against Ford in 2014 promising to outsource garbage east of Yonge St.

3. In 2015, city staff report peer reviewed by Ernst & Yonge found no savings to be had from further outsourcing: https://t.co/CmDd4VkhqG

5. Shortly after report was released, the city's general manager for solid waste Beth Goodger, who signed off on the report, left the city

9. Today's debate has opposite sides quoting from two different reports as fact - one that says no savings, one that recommends outsourcing

It's not the first time Mayor Tory has doled out a contract in the municpal waste sector.

Green for Life (GFL) a Pickering-based company, was awarded the $142 million contract in 2011 under the Ford administration when Ford first privatized garbage pick-up.

But as the Globe and Mail profiled in 2014, under Tory the deal changed.

GFL was disqualified from the process because of a downgrade in its safety rating, the city’s public works chair Denzil Minnan-Wong said.

Instead, Miller Group, an international company with its head office in Markham, is set to be awarded the $88-million contract – an 11.4 per cent increase over the old GFL contract – pending approval from the committee.

While, if passed, it will be interesting to see who gets the contract, it's also important to note, that in all likelihood, Torontonians are going to be paying more.