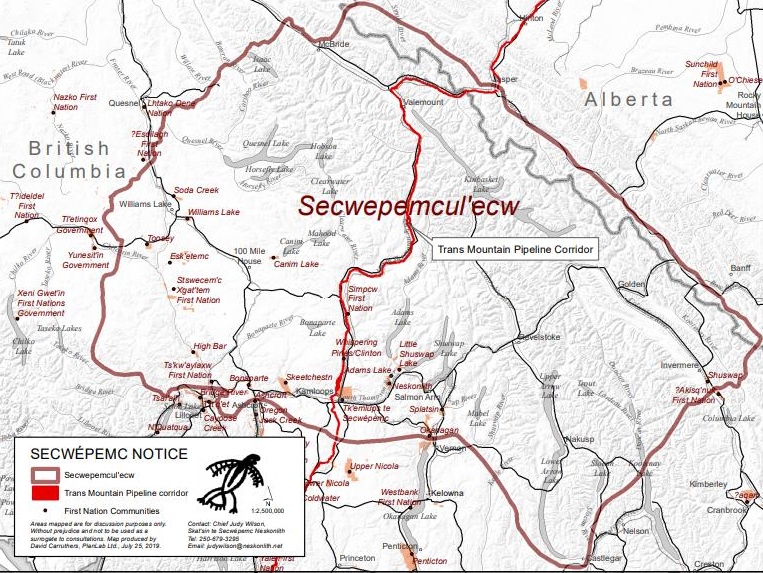 Background: “This is a letter from Neskonlith Secwepemc Chief Judy Wilson to Prime Minister Trudeau and B.C. Premier John Horgan calling them out for using the current pandemic to continue construction of the Trans Mountain Pipeline Expansion Project and reminds them the Secwepemc Title Holders have not consented to the project. Chief Wilson also reminds them that they are ignoring an internationally binding Treaty, ratified by Canada, the Convention on the Elimination of all forms of Racism and Discrimination (CERD). The UN Committee responsible for overseeing the adherence to the CERD Treaty, in December 2019, issued an Early Warning Urgent Action Procedure calling on Canada to stop construction of the Trans Mountain Pipeline Expansion Project until Secwepemc Free, Prior, Informed Consent is obtained.” -Russ Diabo

Letter text is copied below. Full letter and supporting documents are attached as a PDF after the text.

Office of the Prime Minister

I am writing on behalf of the Skat’sin te Secwépemc Neskonlith, a band within the meaning of the Indian Act we are also Indigenous Peoples with rights protected by section 35 of the Constitution Act 1982 and international law, which includes our lands within the outstanding 1862 Neskonlith Douglas Reserve Claim.

It is the responsibility of myself as Skat’sin te Secwépemc Neskonlith Kukpi7 (Chief) to raise issues that affect our Inherent Title and Rights, to the federal and provincial governments, or Human Rights violations to the United Nations Human Rights Bodies.

For greater certainty, the issues raised in this letter are not intended to represent any other organization, nor am I writing in my capacity as UBCIC Secretary Treasurer.

In previous correspondence we have provided both of your governments notice on our position regarding the Trans Mountain Pipeline Expansion Project.

As the Secwépemc Notice affirms, Neskonlith te Secwépemc supports the position of our Secwépemc Proper Title Holders, the People, which is “No Consent” to any activities connected to the Trans Mountain Pipeline Expansion Project within Secwépemc Nation Unceded, Unsurrendered Territory.

We re-affirm, that in accordance with our Inherent Secwépemc laws, legal orders, jurisdiction, from June 2-4, 2017, members of our Secwepemc Nation hosted a Secwepemcul'ecw Assembly. The Assembly took place on the land near Clearwater and we held ceremony right on the route where the Kinder Morgan pipeline (now TMX) is proposed to cross.

In the presence of our Chiefs, Elders, Women and Children, the "Secwepemc Peoples Declaration on Protecting Our Land and Water against the Kinder Morgan Trans Mountain Pipeline" was declared.

We the Secwepemc have never provided and will never provide our collective free, prior and informed consent - the minimal international standard - to the Kinder Morgan Trans Mountain Pipeline Project. We explicitly and irrevocably refuse its passage through our territory… We will continue asserting our collective Secwepemc responsibility and jurisdiction to address these most urgent issues impacting Secwepemcul'ecw.

For greater certainty, the collective Secwépemc Proper Title Holders have not authorized the Shuswap Nation Tribal Council, which is a Chiefs’ organization, or any other organizations to represent them as Title or Rights holders.

We wish to state unequivocally that our members in no way waive our respective Indigenous rights, including title, in our traditional territory within what is now asserted to be the province of B.C.

First of all, I am writing once again to formally register our continued opposition to the Trans Mountain Pipeline Expansion Project, which despite the current global pandemic caused by the spread of the Covid-19 Virus and the issuance of the December 2019, United Nations Committee on the Elimination of Racial Discrimination Early Warning and Urgent Action Procedure, the construction of, and permits authorizing activities related to the Trans Mountain Pipeline Expansion Project, continues by the governments of Canada and British Columbia, without the Secwépemc Peoples Free, Prior, Informed Consent.

We are appalled, but not surprised, that both of your governments are collaborating and taking advantage of the current Covid-19 global pandemic by continuing with the construction of, and permitting for, the Trans Mountain Pipeline Expansion Project without our Secwépemc Peoples Free, Prior, Informed Consent. To this end we note that the government of B.C. has decided “that its order prohibiting mass gatherings of 50 people or more does not apply to construction sites…that construction sites are considered industrial sites, which are exempt.”

Both of your governments dishonourable conduct regarding the continued construction of the Trans Mountain Pipeline Expansion Project does not surprise us, because we observed earlier this year, how both of your governments violated the constitutionally protected and international recognized Title and Rights of the Wet’suwet’en Hereditary Chiefs and Clans by the RCMP military type invasion and forced removal of unarmed Wet’suwet’en People and their guests for the continued construction of the Costal Gaslink LNG Pipeline, despite the December 2019 adoption of the UNDRIP Bill 41 by the B.C. Legislative Assembly and the December 2019, United Nations Committee on the Elimination of Racial Discrimination Early Warning and Urgent Action Procedure. (see attached)

While the UNDRIP Articles may be non-binding, they do represent minimum standards of Human Rights for Indigenous Peoples and the breach of these minimum standards does not bode well for relations between Settler-Colonial governments and Indigenous Communities & Nations or negotiations on the “action-plan” contemplated by Bill 41.

However, unlike UNDRIP, the International Convention for the Elimination of all forms of Racial Discrimination is a binding international treaty, which Canada ratified in October 1970.

As cited above, in December 2019, United Nations Committee on the Elimination of Racial Discrimination issued a Early Warning and Urgent Action Procedure that called upon Canada:

to immediately cease construction of the Trans Mountain Pipeline Expansion project and cancel all permits, until free, prior and informed consent is obtained from all the Secwepemc people, following the full and adequate discharge of the duty to consult;

As our attached Secwépemc Notice states:

Neskonlith te Secwépemc, acknowledge and respect the collectively held title and rights by the Secwépemc Peoples throughout Secwépemculecw. The initial pipeline that was put through these territorial lands did not have the consent of our Secwépemc Peoples, nor does the proposed twinning of the pipeline. Any provincially or federally issued permits or construction notices, or activities on these lands are NOT CONSENTED TO as these are unceded, non- surrendered, Secwépemc Title lands and waters, not relinquished under any historic Treaty, Comprehensive Land Claims Settlement Agreements, Self-Government Agreements or any other Legislative Arrangements.

Our position on this Trans Mountain Pipeline Expansion Project stands. We will continue to vigorously defend our title, rights and interests in opposing this project in Canada and internationally.

In conclusion, we are preparing a response to the UN CERD, regarding both of your governments conduct since the issuance of their December 2019, Early Warning Urgent Action Procedure.

In Protection and Defense of Secwepemcúl'ecw,

Ms. Victoria Tauli-Corpuz, Special Rapporteur on the Rights of Indigenous Peoples, UN Office of the High Commissioner for Human Rights